Like so many high school superstars before and after him, Sam Worley had grown accustomed to logging miles and grinding out workouts alone as he rose to prominence at New Braunfels Canyon High School, located just 30 miles north of San Antonio, Texas.

Without any of his Canyon teammates close to his caliber as a 4:00 prep miler and 2016 NXN runner-up, the current University of Texas All-American had to constantly keep himself accountable, lest he slack off on a run or a rep during his pre-college days.

"In high school I pretty much trained all on my own," Worley told MileSplit during a look back on his freshman year with the Longhorns. "That's definitely harder on you mentally. We still (had) summer practices, but you're not running with someone every day. It's very hard when you're doing things like tempos to tempo by yourself."

Such is the dilemma for a prep star, particularly during the summer, when the extreme heat can make the trials of lonely miles feel even more dire. In that regard, the sophomore-to-be has welcomed the boost of training everyday with his fellow Longhorn. It's a program that, just like Worley, seems to be on the rise in cross country.

Despite being barred from official practices yet due to NCAA rules, Worley and many of his teammates get together almost daily to make the summer grind feel that much easier.

Cross Country season is right around the corner! #HookEm pic.twitter.com/yJnlyMtuS7

"This has been my first summer where I'm training with teammates and it's been awesome. I love it," he said. "Just spending time with the guys and being able to grind runs together has been really fulfilling."

A bounty of talented training partners is a completely new luxury for Worley.

For the 2016 Texas UIL state cross country champion, sharing the training load with his UT peers before official practices begin in August is a stark difference from even last year, when Worley was readying for his first collegiate cross country season mostly by himself.

In that way, last summer felt more like any other had before a season at Canyon for Worley, except that his isolated mileage had increased as he prepared for longer races.

The start of official practice last fall for Worley was an immediate weight lifted from his shoulders. The training volume and intensity was certainly harder than his Canyon days, but with guys like Connor O'Neill, Alex Rogers, and John Rice running next to him now, the strain of pushing through a session was nothing compared to doing it unaccompanied like he had for so long.

"In high school I struggled with some workouts because I felt like I was by myself and I was having to do all the work alone," said Worley.

"Even though I came to college and the workouts got harder and the mileage got higher, and the training overall became more of a grind, I felt like because I had teammates to run with and train with and help share the load, that training got easier."

That's why Worley--fresh off an All-American fifth place finish in the NCAA 1500m--knew this summer would have to be different from every other summer training block before.

An achilles injury late in the season last fall derailed his chance to compete at the NCAA meet, and that fact has gnawed at him since. Because of that injury, the 10K distance is still a mountain he has yet to climb, and Worley is too important to Texas' success to spend another summer toiling alone.

Training this summer with the Texas men has allowed him to stay focused on the team's goals, and sharing the work has made his role on it seem much less daunting than before.

"That for me was a big boost," Worley said. "Going into races, just trying to establish yourself in the top seven, that whole mindset, I felt like it just helps me because I'm naturally competitive. I naturally want to compete for a top seven spot, a top five spot, a scoring spot. I love my teammates and I love working with them everyday."

Really proud of @Rogers_XC @sworld99 @logruns for racing to the win in the DMR at the National Relays pic.twitter.com/Go2yN2jPks

"Since we all have the same goals, which is to succeed as a team, it makes practice go I feel like much easier because I'm surrounded by a like-minded group of individuals who are all motivated and willing to work hard and work for each other."

As a state champion, Nike Cross Nationals runner-up, and Foot Locker All-American as a senior at Canyon High, Worley's high school regimen obviously helped him reach the upper echelon of prep distance running. He thrived off of relatively low mileage, typically 40-45 miles per week, and being able to meet for organized practices three days a week during the summers allowed easy contact with coaches. But strict NCAA practice rules in the summer and racing 8k and 10k in college meant two things that he had relied upon to succeed in high school were gone.

Worley made it through last summer solo while gradually increasing his mileage to 60-65 miles per week, but after his promising inaugural cross country season as a Longhorn was cut short due to that injury, summer 2018 is all about making sure that last year's top freshman in the Big 12 enters the fall confident, fit, and healthy. That meant that working with his teammates on the daily this summer was a no-brainer.

Doing so is a constant confidence booster for Worley, a reminder that he no longer has to bear the weight of his fitness alone. It could mean big things for the sophomore and the rapidly ascending Texas men. 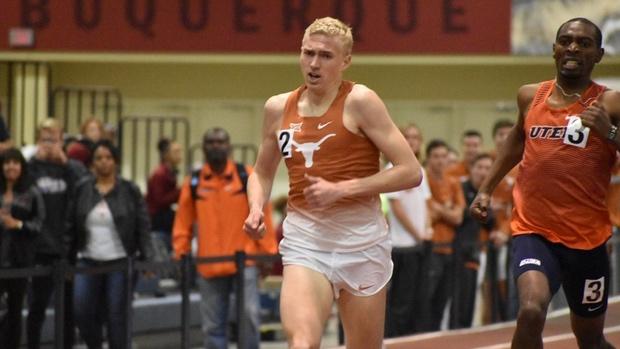