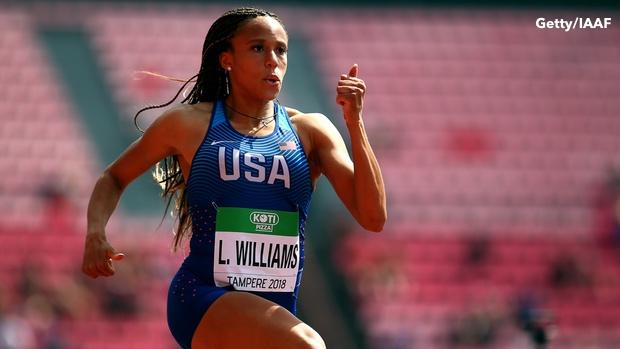 As a whole, Team USA had an underwhelming showing at the IAAF World U20 Championships in Tampere, Finland, over the past week.

The first gold medal for the U.S. came on the second to last day and the American squad was felled by baton mishaps--in the women's 4x100 and men's 4x400--some surprise performances (read Indonesia's Lalu Muhammad ZOHRI in the men's 100m) and the presence of Diamond League caliber athletes from other countries.

But an off-championship is to be expected, especially when considering the timing of the meet and its importance relative to another meets on the calendar.

The U20 Championships will never be the focus of the season for American athletes. Nor should it be. There are obvious exceptions, but by and large athletes in this age range in the United States are peaking for the NCAA Championships or post-season high school national championships.

Sure, the United States will often still make it to the top of the medal table, but that is due to the country's sheer depth and overall strength in track and field.

In Tampere, despite an off-meet, the United States tied for the third most gold medals and earned 18 medals overall, six more than the any other country.

For the United States, the U20 roster is typically split between high school superstars and stand out collegiate freshman. In that age group, it's rare for the U.S. to send an athlete that would be top three in a senior championship. The obvious exceptions (Sydney McLaughlin, Lynna Irby, etc.) didn't compete in Finland this year.

But that's not the case for the rest of the world. Some of their top athletes are still eligible to compete in U20 meets and without an overarching system--like the United States has with the collegiate championships--they can focus their full attention on an event like the U20s.

This is why two of Ethiopia's best in the distance events, Samuel Tefera and Selemon Barega, were racing in Finland and not at the Diamond League. Both men have global medals already and are included in any discussion involving the best in the world.

Neither, however, finished in the top three at U20s. Barega was fourth in the 5000m and Tefera took fifth in the 1500m, both snowed under by the incredible depth of the meet.

But that same depth wasn't able to prevent Celliphine Chespol in the women's steeplechase. Chespol, who has the third fastest mark in the event ever, rolled the competition.

It turns out that if you are the best all-time in your event, then you are definitely the best in a U20 competition.

These championships are about projecting the future.

As a result, the biggest story to come out of Tampere was Jamaica's Briana Williams.

She isn't competing in Diamond League races like some of the names listed above--though she has competed at the international level, at the CARIFTA Games in the Caribbean, and at Racer's Grand Prix in Jamaica--so for many in the track world, this was their first time seeing Williams.

Predicting which teenagers become stars in their 20s is always problematic, but Williams looks like she has staying power.