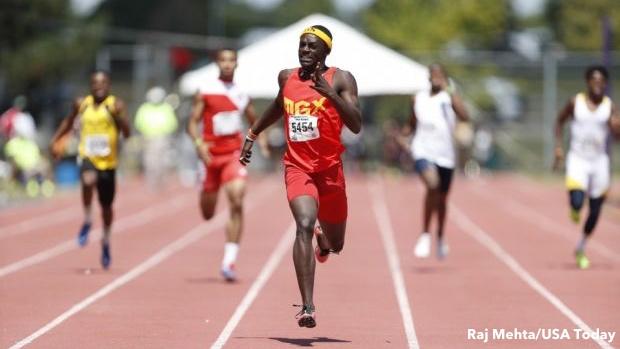 Day 4 of AAU Club Nationals was quite the show. Let's look at the two record breaking performances in the field events.

The two main events on the track were the 800m time finals, semifinals and 200m prelims. With more than 100 heats across all age groups in the 200m prelims, we still had two records go down before the semifinals.

The 9-year old girls sprints are a group for the books! Two girls broke Adidas' Aleia Hobbs' record of 28.37 set back in 2005. In heat 6 of the prelims, Jasmyn Ezell of 478 Elite (GA) ran 28.20. Following that record setting performance, Destyni Devine of Olympia Track Club (FL) ran a convincing 27.85 in heat 9 to take the record. This is Devine's third club championship record in two days, with semifinals of both the 100m and 200m still to come!

In the boys 11-year old 200m, Evan Boykin of Charlotte Heat (NC) set the precedent very early, breaking the record with his time of 24.60. However, in the following heats, Da'Vekio Ruffin of Louisiana Kream Elite (current 100m record holder) ran 25.33 and Chris Singleton (Down South Xpess) ran 25.35, which both break the previous record of 25.41 set in 2017.

Tyrese Cooper of MGX finished the 17-18-year old 200m with the top qualifying spot heading into the semifinals, running 20.94. He'll be chasing his record of 20.74 that he set last year.

There were three age group records broken in the 800m, but with the finals for ages 12-18 on Saturday, I'm sure more records are on their way down.

Cha'iel Johnson is beginning to start a middle distance reign of her own. Johnson adds another record to her collection by qualifying for Saturday's final of the 13-year old girls 800m. She broke Miami's own Daesha Rodgers' record of 2:12.65 running 2:12.27. Following Johnson's performance, Daniel Jean- Charles (Miami Pal Chiefs) is the fastest qualifier running 2:05.65. Jean-Charles has five seconds on the second qualifier and won his heat by a six second margin. The age group record is 2:02.77, and with the right push from the field Jean-Charles could re-write the books

In the 15-16-year old girls 800m, current U.S. #2 and reigning Junior Olympic Champion, Athing Mu (Trenton Track Club) cruised to a top qualifying spot. She ran a convincing 2:04.51 to win the New Balance Outdoor Championships this year. Mu ran 2:13.58 in her prelim, but with her ability to push the pace from the start and a strong second lap, Mu will be chasing her current record of 2:07.18 in the finals.

In the 17-18 age group it looks like it's going to be a tight race for the title, for both genders. Jasmine Douglas Grant and Daishon Spann are the top 2 qualifiers heading into Saturday. Both in two separate heats running 2:15 should lead to a great finals. Douglas Grant ran 2:15.74 with 2 seconds on second place in her heat, while Spann ran 2:15.85 with the next person 4 seconds behind.

As for the boys, last year's standouts, twin brothers, Colin and Keaton Jones (Memphis Jaguars, TN) are sitting in the top spots going into the finals. Keaton ran 1:54.81, Colin ran 1:55.22, the brothers placed 2 nd and 3 rd at last year's Junior Olympics. In the third qualifying spot is Sukeil Foucha of Elite Speed (FL), who won the 4A State title in the 800m. Foucha is definitely a challenger that can split the Jones twin 1- 2 finish (his season best is 1:53.85).

There are three days left of competition so, be prepared for some record setting performances! Remember you can watch this event live from flotrack.org.

For all things AAU Club Championships, be sure to follow FloTrack and MileSplit on Twitter (@FloTrack @Milesplit).