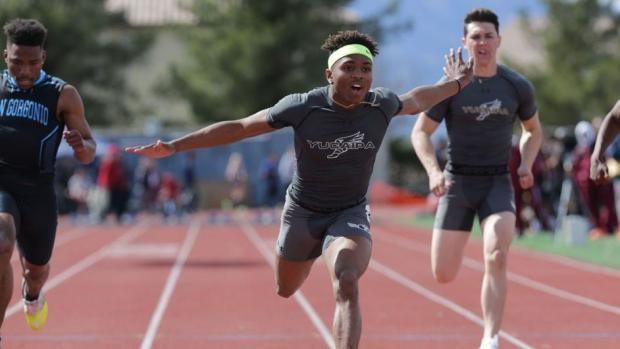 YUCAIPA, CA -- Yucaipa High School's Asani Hampton didn't start competing in track until the ninth grade, but he knew he was fast as early as his grade school years.

He remembers playing with a cousin, three years his elder. She was riding a bicycle and he was running beside her. Despite being on foot, it wasn't even a race.

"She couldn't believe I was keeping up with her," Hampton said recently ahead of the California Interscholastic Federation Track and Field Championships on June 1-2 at Buchanan High School in Clovis. "That's when I realized I was really fast. I was never really focused on track until I got to high school, but I always liked to race people and I thought I was good at it."

The small but sturdy 5-foot-5 senior is indeed pretty good, one of the nation's best. His wind-legal personal best of 10.26 (+0.1) at 100 meters ranks first in talent-rich California and third nationally.

On Saturday at the CIF Masters Meet, he won the event at the CIF Southern Section, edging out Murrieta Mesa senior Christian Shakir-Ricks by the slimmest of margins, 10.52 to 10.53 (+2.2), to keep his unbeaten streak in tact -- though the pair split in the 200m, where Hampton finished behind Shakir-Ricks.

The larger question is something Hampton has been asking himself a lot lately.

Can the University of Michigan recruit win a state title?

Just ask veteran Yucaipa track coach Robert Guillen. He saw signs of Hampton's potential early, too, though even before the young star hit the track.

As the defensive coordinator for the varsity football team, he first witnessed Hampton at a football camp when his protege was still in elementary school.

"We were timing kids in the 40 (meter dash) and he was beating kids three, four, five years older and beating them pretty easily," Guillen said. "I definitely thought he had the chance to be something special, whether it was in track or football."

Hampton admits football was his favorite sport growing up. It was a bond he shared with stepfather, Shane Theriot, and he grew up playing running back in the local Junior All-America Football program and went on to earn All-League honors as a defensive back for the high school team.

But it was his mother, Malkia, a former track athlete at UCLA, who nurtured and encouraged her son's interest in that sport and still serves as his primary mentor and critic.

"She is always quick to tell me what I did wrong," Hampton says. "She knows the sport and she'll let me know when she sees something."

But Hampton's career didn't exactly take off right away with a hip injury slowing his entire freshman season. It was a considerable setback that served as an incentive. It wasn't until his sophomore year when he started registering noteworthy times.

"I did pretty well but I just kept thinking about how I might have done if I wasn't hurt," he said.  "It made me want it even more the next year."

Hampton is usually the smallest competitor on the starting line. He's easily recognizable not just by his small stature but his trademark neon headbands.

He admits he was often underestimated early in his career, that his size led others to doubt him. But that hasn't been the case lately. His times are now speaking volumes. 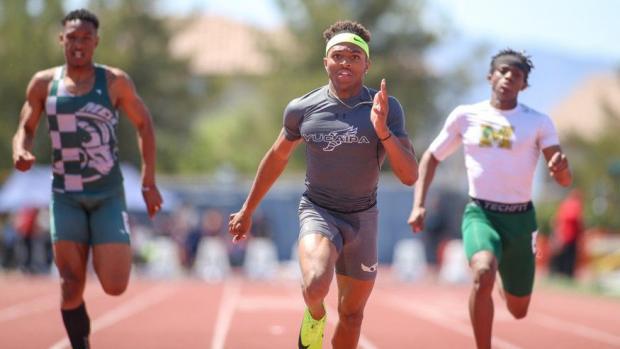 Guillen doesn't think Hampton's size is a disadvantage, though. He chalks that up to his good form and body makeup.

"His technique has always been very good. I have had to do very little with that and what I did was more fine-tuning as far as his arm movement," he said. "A lot of guys his size take short choppy steps but he doesn't. It helps that he has a very short torso. He's all arms and legs."

Guillen added that Hampton is also adept at breaking down his races.

"He usually knows what he has done wrong even before he sees the video," Guillen said. "He'll tell me exactly where he could have done better even before I say anything. It is great to have an athlete that can do that."

Now Hampton's prep career is nearing an end, and those hopes are now forming into expectations.

Next up is the CIF state meet, and after his showing at the Mt. SAC Relays in April, it also earned him an invitation to Brooks PR on June 8 in Seattle.

Hampton says he's accomplished almost everything he's hoped for in this sport, but the one goal that remains is the long standing state-record of 10.25 in the 100 set by Henry Thomas of Hawthorne in 1985.

Hampton's best, which came at the Citrus Belt League final this season, was oh so close.

"It's such a short race everything has to be perfect but I think I can do it," said Hampton, who will study mechanical engineering at Michigan. "It would be great to be able to break that record that has been around for awhile."

He'd like to leave a legacy for future athletes to shoot at. And he wants to compete in the sport long after college, but is preparing for life after sports.

"I can't run forever," he said. "I need to make a living after that so I need to get a good education."

Guillen is excited about watching Hampton's progress over the next four years with the Wolverines.

"We're just a public school with limited resources," Guillen said. "Once he gets someplace where they have the facility, strength and conditioning coaches and all that other stuff he is going to get even better. He has gone as far as he can go with us. He needs to be challenged and pushed at the next level."