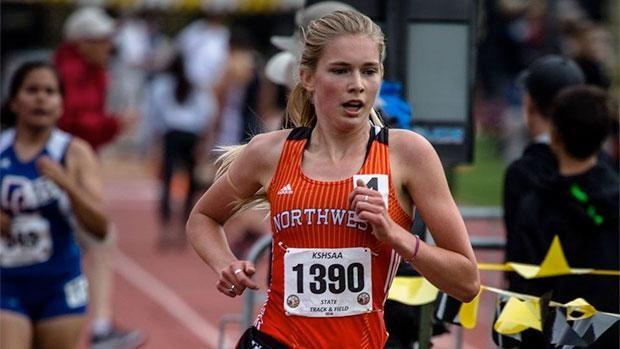 Shawnee Mission Northwest senior Molly Born made her long-anticipated return to the 3200 meter run on Friday at the Kansas Relays, finishing in second place in a time of 10:45.75 on a cold, windy afternoon at Rock Chalk Park.

Despite the rough weather, it's the fastest time run in the 3200 by a Kansas girl this season, and serves notice to the rest of the state that the two-time Class 6A state champion in the event is back after injury cut short her 2017 season.

Victoria Findley of Blue Springs South, the Missouri Class 5 state champion in cross country and 3200 meters last year, seemed less affected by the wind and cold than the rest of the field as she won the Kansas Relays with a career-best time of 10:35.25.

McKenzie Wilks of Pittsburg finished fourth in a time of 10:56.93, and Clara Mayfield of Manhattan was seventh in 11:06.92 -- both of whom beat the previous best mark in Kansas this season.

But the eyes of many Kansas track and field fans were on Born, who won the Class 6A 1600 and 3200 meter runs in 2015 and 2016. A year ago, Born was one of three Kansas girls who broke the Kansas Relays record in the event, finishing second in a time of 10:10.64. At the time, it was the sixth-best time in the United States.

National Javelin Leader Dana Baker Scores Another Big Win: The high school events are underway at the 91st annual Kansas Relays at Rock Chalk Park, and the first win of the meet has gone to a Kansas athlete. Olathe North's Dana Baker, the No. 1-ranked javelin thrower in the United States as of this week, won by more than 20 feet with a throw of 166-6. Baker had three throws greater than 160 feet, and all six of her throws in the prelims and finals were better than every other thrower in the field. Kansas athletes did well in the event, however. Madison Lueger of Centralia was a solid second in the event, throwing 145-0, while Kayla Kurtz of Baldwin placed fourth with a toss of 139-4.