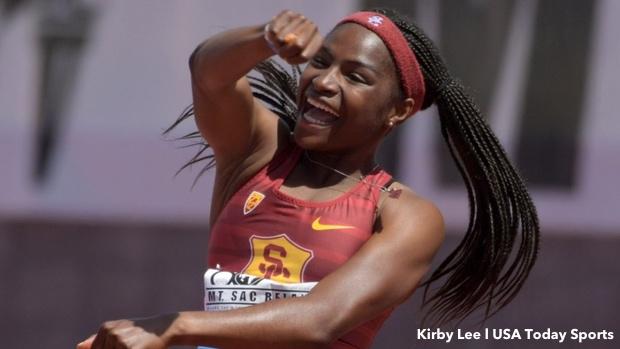 Next up in future stars of tomorrow: Miami Northwestern (FL) graduate Twanisha Terry.

The former Florida star and current University of Southern California freshman set the NCAA lead in the women's 100m on Saturday at the Mt. SAC Relays, running a wind-legal 10.99 (+1.7) which broke a school and freshman record at USC that stood since 1999.

Terry was also just shy of the American junior record of 10.98 seconds, which Asics pro Candace Hill achieved in 2015 as a high school sophomore in Georgia.

It wasn't Terry's fastest time of the season, though.

That all conditions mark came on March 24 at the Power 5 Trailblazer Challenge, when Terry zoomed to the finish in 10.97 seconds on a +3.5 wind reading, thereby negating its legal status.