Clayton Mendez Secures US No. 2 At Distance Night In Palatine 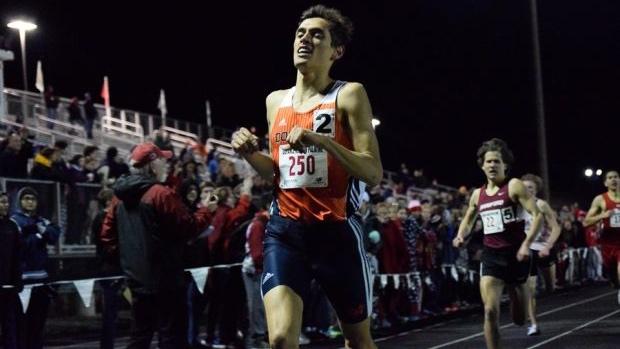 1. Let's start with the girls elite DMR. While Naperville North's 12:12.54 was a very good performance and stands as a US No. 13 mark and a new meet record by 30 seconds, keep in mind that (potentially) a few of the girls ran that very morning (I was told earlier this week there was a chance this would happen) and doubled back to make sure they had an opportunity to compete in an outdoor DMR -- an opportunity the Huskies seldom get over the season. The team's anchor Sarah Schmitt, an Indiana University recruit, finished the 1600 leg in 4:58. The next-closest competitor was more than 30 seconds behind.

3. The pre-meet favorite in the girls 800m, Stephanie Kriss, played second fiddle the entire race. Instead, Lasalle-Peru's Rachel Hickey dominated in a new meet record and US No. 8 tying mark of 2:10.70.

4. The boys DMR had a super competitive filed that consisted of some of the premier distance programs in Illinois, but it was Downers Grove North who ran away with it, finishing in a new US No. 4 time of 10:15.38. The squad included Jacob Ridderhoff, Brendan Lockerby, Ryan Birkmeier, and Miles Christensen.