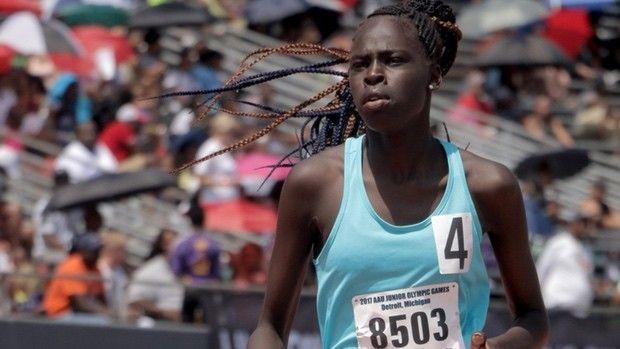 By Lincoln Shryack - For MileSplit

Aside from an obsession with Grey's Anatomy, there's not much about 15-year-old Athing Mu that resembles a typical teenager.

The high school sophomore from Trenton, New Jersey, can't hide her age when revealing that she loves binging the hit ABC drama, but that's just about where the similarities with her peers end.

Mu, a 2:06.59 performer in the 800m who attends Trenton Central High, speaks with the confidence of someone beyond her years while detailing what she hopes will be her future in track and field.

"I do want to run in college, probably just maybe like two years or so and then I'll probably end up going pro," Mu told MileSplit.

While it's certainly tempting to write off such a bold proclamation as youthful hubris, Mu distinguishes herself by having the game to back it up.

Fresh off an indoor season that saw her run the fastest time in the country and collect a New Balance national title, it's not hard to believe that Mu knows exactly what she's doing as she attempts to chart an untraditional path to stardom.

The preternaturally gifted half-miler is rapidly climbing the national ranks despite electing not to compete at all for her high school team. Instead, Mu is sticking with the Trenton Track Club and her longtime coach Al Jennings, who leads the program that has guided her career since she was 5 years old. It's an interesting choice considering her brother, Malual Mu, a senior at Trenton Central, has chosen to compete for the high school team.

"Every year he just takes my training to another level, which is what I enjoy and I believe is the right thing I should be doing," said Mu.

You can't argue with the results.

Not only did Mu win last month's New Balance Nationals Indoor 800m in a new PR and US No. 1 time of 2:06.59, but she also won the Emerging Elite 400m title at the same meet in an effort of 54.98 seconds, which was a PR and meet record. In February, she also split 24.74 in the 200m. While her two victories in New York City this past March represented her greatest career accomplishments to date, Mu isn't all that new to winning national titles.

Last summer at the AAU Junior Olympics in Ypsilanti, Michigan, the freshman won her fourth consecutive 800m crown, running 2:07.99 -- a time that just missed Ajee Wilson's AAU 15-16 year-old age group record by less than a second. For good measure, Mu also added a 1500m title that week in a PR of 4:33.04, another near miss in the record books.

While Mu won't ever earn the distinction of being a New Jersey state champion, Jennings is quick to point out that he didn't have any say in the matter. It's all Mu, who sees no reason to fix what isn't broke.

"We allowed her to make that decision," Jennings said. "Otherwise, anybody would say, 'Well, you influenced her to do this, and this hurt her chances of doing things.'

"Because I explained to her, 'You won't be able to run the state championships.' Which we know she would have probably been state champion in the mile, and probably in the 800. Right now, she has the fastest time in all those events in the state."

The continued success with Jennings is precisely why Mu, an athlete with eyes focused squarely on success years down the road, never hesitated in spurning her high school team, Trenton Central, for the Trenton Track Club.

"I feel like that's part of the reason why I've been improving throughout the years because I've been sticking with the same training," Mu said. "My coach understands what you need to do in order to improve your times and become a better runner."

Jennings, who formerly coached at Trenton Central for 40 years until his retirement in 2010, has known Mu since she was a 5-year-old hanging around the track while her older brother practiced with the club.

Four years after their introduction, Jennings and Mu got their first taste of the success that has defined their partnership, as 9-year-old Athing won the AAU Club Nationals 800m run. That's when Jennings and his club assistant, Bernice Mitchell, realized that Mu was a special talent.

"At that particular time, at 9 years old, she (Mitchell) said, 'I think I'm going to need some help with her because she's a lot better than we thought,'" Jennings said.

Both Mitchell and Jennings had the right instinct. Their pupil has continued to progress year-after-year in the mid-distance events, and now at just 15 is on the shortlist of the very best half-milers in the country.

Both Mu and Jennings feel that she can run 2:04 outdoors this season, a time that would likely make her one of the five fastest in the country.

That's not to say that sticking with the program has been without its challenges. Because every other Trenton Track Club member her age competes for their high school during the school year, Mu has to train almost exclusively by herself during the fall, winter, and spring.

Aside from the occasional workout partner over the school year, Mu logs mile after mile and rep after rep alone while chasing records and titles. It's enough to make one wonder if Mu might truly be limiting herself by bearing such an enormous burden in solitude.

Plus, it's not just the training partners she's missing out on, but the race competition as well. Without a high school team, Mu can't compete in big invitational meets during the regular season, and so she faces minimal competition before nationals. That's tough no matter how you spin it.

But Mu knows her reality and she says she's 100 percent committed.

"I like training by myself. It's good," she said. "But I also like training with a partner, too. It doesn't really bother me when I train by myself because in the summertime I'll have my training partners."

Jennings was skeptical at first, but the results have spoken for themselves.

"I thought it was going to be a negative, but it's really worked to a positive for her," Jennings said. "She has to be a unique individual to do that because every kid can't do that."

According to Jennings, Mu's ability to compete at a high level despite the unique challenges she's faced with is yet another reason why he believes the sky is truly the limit for his young star. Can she run 2:00 by the end of her high school career -- or at the very least, while she's still in high school.

Absolutely, Jennings says. Mu has proven over and over again that she can deliver the goods. The inner drive she possesses makes every goal seem obtainable.

"The only reason I think it has been (a smart move away from the high school seasons), is because I think she's a special talent," Jennings said. "Most kids don't have that luxury. She's a very smart young lady. She knows the sport probably just as good as any coach at this point."

That factor -- her ability to embrace her situation as if it's just a minor blip on her path to greatness -- exemplifies a rare maturity coming from a 15-year-old. She's confident in what she's doing and has full faith that Jennings will steer her to plenty more national titles.

Oh, and that 2:00 before high school is done? Mu attacks the prospect just like she's attacked her career up to this point.

"I love that he has very high goals for me because he's my coach and he knows my potential," Mu said. "He knows what I can do. It just allows me to believe that I can do that. If he says that, then I'm pretty sure I can actually do it."