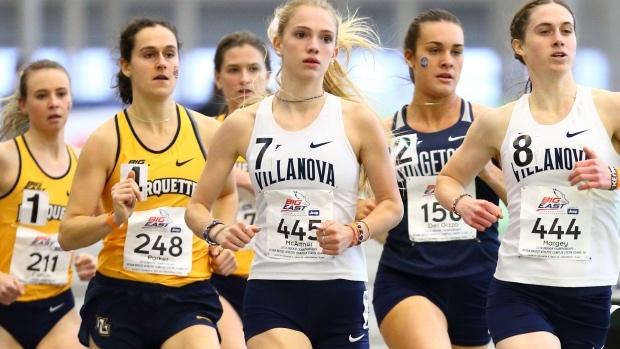 Rachel McArthur didn't waste time picking up where she left off as one of the nation's top high schoolers.

In her first season competing for Villanova, McArthur ran a personal best of 2:04.92 in the 800m during the indoor season, taking almost a second off of what she ran as a high school senior.

Friday at the Colonial Relays in Williamsburg, Virginia, McArthur will try to add to her strong freshman campaign as she takes to the track at 5:30 PM ET.

FloTrack: Now that you've had a month to reflect after your first NCAA track season, how do you think it went?

Rachel McArthur: I think overall it went well. I didn't come in expecting to PR or run the best race of my life my freshman year, but I think I ended up going 2:04, which was a PR for me. I think upon realizing I could do that I definitely ended indoors a little disappointed not making nationals (McArthur missed qualifying for the national meet by 0.39 seconds). It was all a very close spread and I feel like I should have been there. It definitely makes me more excited for outdoors, knowing I can go 2:04 on a good day.

Were you surprised that you were able to get things to click so quickly?

I think leading up to it (the race at Boston University where she ran 2:04) a little bit, but once I got into the race there was just a point that I reached that I said, "OK, right now this is the worst it hurts and I can either push and run faster if I do that, or I'm just going to settle for what I've always done," which would have been a 2:05/2:06.

How much harder are the college workouts than what you were used to in high school?

In high school I'd make it by on, "I'm a little tired, I'll cut the workout short today," or, "Let's slow this rep down," and modify it for myself, but now it's in my mind that I have to do it -- I have to get it done. It's definitely a lot more of a challenge to get it done. I have a lot of teammates with me, even though it might be harder mentally and physically there is a lot of support and that always helps.

I love training with Siofra. It's crazy running with her, especially after how she raced at nationals. It's an honor as a freshman. I don't go in expecting to be training with the top dogs.

It's great having someone like that to help you physically and mentally.

Is she the type of person that gives a lot of advice?

She's the most supportive person I know. Even during the workouts she'll be talking, pushing me, pulling me (and) saying stuff like, "You've got this, hold on," or if I'm struggling on a rep she will take over and pull me through it-100 percent the most encouraging person I've ever trained with.

Was it a little intimidating at first training with someone like that?

Not really, maybe I should have been. I really look up to her and I just thought I'm not intimated, I'm just inspired. Rather than be afraid and not put myself out there and not try to compete with her I said I'm going to take this opportunity and just learn from it. I'm not intimidated racing with her or anything like that. It's more like this is my teammate and she happens to be an amazing runner and therefore I want to be just like that and I'm going to try and keep up with her.

Is your enjoyment of the sport the same?

One hundred percent. I would always say how I really disliked cross country in high school, I was just never a fan. I came here and I just love it-it's especially fun to have your teammates with you now. Whereas in high school for a long time I was alone a lot, but I think if anything my love for the sport has been amplified in college because you are surrounded by people who love the sport and it's not just you every day and doing something-you have other people to share it with now.

Is it weird having so many people around you at all times during a race even if you are running a PR?

I'm still kind of in this transitional phase that I wish I wasn't in. There's no way around it. I do get a little less confident in college races. In high school I had all the confidence in the world. I wasn't nervous showing up to races. I was saying, "I know what I can run, I know what these people can run, (and) I'm fine with where I'm at."

Now, I go into this race as a 2:04 seed and I'm last. It brings you down. It's a lot harder. In the races I get discouraged sometimes, but at the end of the day that's what competing is and high school you don't face that all the time, but I think I'm learning that's what I'm going to be up against a lot of the time and if I want to be in the position I was in high school then it's going to take a lot more work.

What's the goal for this weekend?

I need to get the regional qualifier-first of all because I haven't hit it this season, which is like a 2:07 I believe, and that's not incredibly crazy. I just want to run my hardest because last weekend I didn't run that great and I was disappointed with my effort. So I just give all my effort this weekend and hopefully go near my PR. I don't want to expect that as a freshman, but I do want to get a little closer to it and give full effort.

Where did you watch the Villanova-Michigan national championship game?

Me and a couple of the girls and guys on the team watched on main campus in the Villanova Room which is just a big media room.

It was great. It was a crazy environment to be around all these people who just love their school and are supporting it. I'd never been in a situation like that where just everybody was just so excited for their school and their peers. There was a lot of hype, there was a lot of loud music, big screens, news reporters. It was really insane. I'm still excited from it. I'm excited to race because of it.

I tried to prepare myself for what it would be like, but it was just crazy. Me and my roommate Alex Harris got a little split up from the group because it was incredibly crowded, which it's not a huge school so you wouldn't expect so many people to come out of nowhere, but they did. They just poured out of everywhere, screaming, running. So we ran with the crowd; we kind of got stuck in it. The whole school kind of flooded main campus. Everybody was just cheering, happy, and music.

It got a little wild toward the end of the night. There were random fires everywhere, people climbing glass windows. It really turned into more of a riot and it got a little out of hand I'd say, but everybody surprisingly was still going strong after six hours of standing before the game. Everyone still had all the energy in the world.

Did you get any concerned calls from your parents?

I just followed the team. Siofra was with us as well and I tried to stick with her. If Siofra is doing this, if she's staying and watching the game, I'll be safe with her. It was just very crowded-that was the main concern. So many people just running. And you kind of had to keep up with that crowd.

Was it hard to refocus the next day?

I had a workout, actually. Me and my roommate were cautious; we knew we had a workout and we didn't want to be out too late. We went straight back after the game and went to sleep and we still got like eight hours of sleep, which we really pride ourselves on how much we sleep. I think standing for six hours, we just stood for so long so my legs were pretty tired for the workout and I'm still really exhausted. I'm planning on going to bed at 8 o'clock tonight to kind of catch up. I think we both agreed that it was not as easy as it would have been had we gone to bed that late.