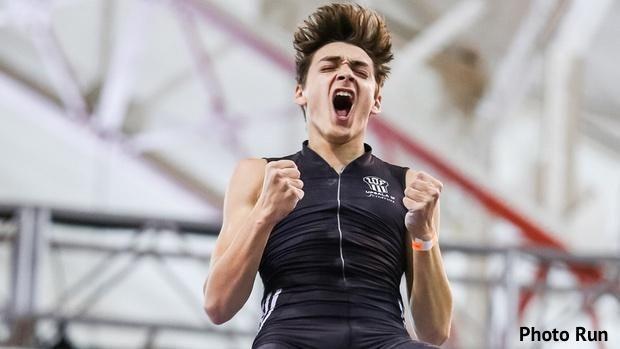 The Louisiana High School Athletic Association needs to take a step back and think for a second.

Is the state's top governing body in athletics really going to take away the remaining eligibility for Mondo Duplantis, the best track and field athlete to ever grace Louisiana soil, for something it failed to enforce in 2017?

As the indefatigable Vanilla Ice once rhymed:

Here's the situation, previously detailed by The Daily Advertiser in Lafayette.

The LHSAA is strong-arming Mondo -- the owner of a World Junior Record, the high school national record and basically every single mark in the top 10 all-time in the pole vault -- from competing in a high school uniform for Lafayette High again if he chooses to compete at the Texas Relays at the end of March.

The LHSAA has told his father, Greg, a working lawyer in Louisiana, that they will do this. The reason being, they have illustrated, is because Mondo will compete in the open men's elite division as an independent competitor or independent team. That's against the rules.

Indoor rules are different, the LHSAA added. That's why Mondo never lost his eligibility in the winter, even enough he competed several times on his own.

Mondo, a senior and a three-time outdoor, four-time indoor state and two-time national indoor champion, has one more spring left before he graduates and moves on to Louisiana State University, where most of his family -- mom, dad and brother -- has attended. He vaulted 18-6 on March 15 at the Oil City Relays and may vault on Friday at the Beaver Club Relays in the Lafayette Parish Championships.

And here's the thing: Greg says Mondo is going to the Texas Relays, an event he won last year. He's going to compete against his childhood idol, world record holder Renaud Lavillenie, who Greg added "is coming to the event because of Mondo."

Lost eligibility or not, he's going. He's not questioning it.

Oh, and guess what? Mondo competed at The Texas Relays as an independent last year. He punctuated the appearance with his top outdoor performance to date in 19-4.25. Then, a week later, according to the Daily Advertiser, Greg received a letter from the LHSAA's BJ Guzzardo that basically boiled down to, "He wasn't supposed to do that!"

Mondo competed for the remainder of the season, four events in Louisiana. He won a state title, competed across the country a few times, then began to compete internationally, receiving a waiver from the LHSAA to do so. The association even wrote Mondo a letter clearing him to do this. Then he went on to compete at the World Outdoor Championships in London for Sweden, finishing ninth.

So why the reversal? The LHSAA didn't notify the family of the state's procedures before last year's Texas Relays, and then proceeded to allow Duplantis to compete for the remainder of his junior season.

Why not reexamine the rule, adjust it, then and there?

"There are other provisions that suggest that once in the season, an athlete (track and field other than distance runners) may not compete for an independent team, or against an independent team (or athlete)," Greg told MileSplit this week.

Greg sent a letter to the LHSAA in the fall asking for a ruling and, "if not in his favor, a waiver to compete."

Greg said the LHSAA's rules are ambiguous, in some ways a little out of touch for the modern athlete -- and let's be real, a lot of things have changed for elite track and field athletes in the past five years!

"They sent back an equally ambiguous letter that did not clearly state their position," Greg said.

One provision said an athlete may participate in a competition with the permission of his principal, which Mondo received from the top leader at Lafayette High.

But the LHSAA apparently isn't budging.

"The difference is that the independent team rule applies to outdoor track," LHSAA assistant executive director Adam MacDowell told The Advocate in Baton Rouge. "I am a Mondo fan ... I put together the letter that allowed him to compete in the IAAF meet. But this is a rule. If we make an exception for Mondo, that would open the door for others to challenge the rule."

For goodness sakes, Mondo Duplantis is the greatest pole vaulter in high school history! Don't you think he's earned the right to compete wherever the hell he wants to?

Essentially, what this all boils down to is this: the LHSAA is waiting for the Duplantis' to make a move.

But the move, actually, is on them. Because there's no second-guessing with Mondo. He's going to the Texas Relays. And he's competing against the best in the world ... because he's earned the right.

The LHSAA needs to stop and think. Are you really about to be that organization? The one that doesn't let its all-time greatest track and field athlete finish out his senior season -- because of a rule?

Give the 18-year-old his horse and let him ride into the sunset.