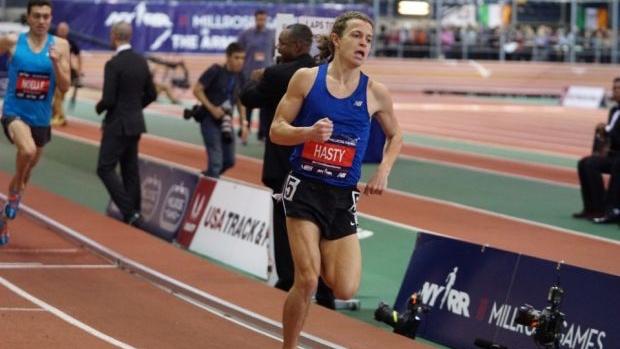 The last time Brodey Hasty went after a sub-4 attempt in the mile on Feb. 3, he ran the fourth fastest time in high school indoor history.

On Sunday, the University of Oregon signee is giving himself one more chance to do better.

The Brentwood (TN) Track Club athlete is entered at the Boston University Last Chance Meet among a field of collegiate and professional athletes. This is the same venue where Skechers athlete Edward Cheserek dropped the second fastest mile of all-time in 3:49.44 on Feb. 9.

In preparation for this weekend's attempt, Hasty went 1:55.17 in the 800m at the UK High School Indoor Invitational on Feb. 17 in Lexington, Kentucky.

Earlier this week, Hasty's coach, Guy Avery, said that the team was gauging its plans on a key workout, one that ultimately be the deciding factor in whether Hasty would go after sub-4 again. But he added this race has been on Hasty's calendar since the end of the outdoor season last year.

That meant Hasty would forgo his state indoor championships held on the same day, Feb. 25, to go after the mark. Hasty's teammate, Scott Thompson, will be looking to go under 4:08 at the Tennessee state indoor meet.

Hasty is looking to become just the third athlete all-time to break 4-minutes indoors. He would become the 11th athlete to do it all-time. Loudoun Valley (VA) High graduate Drew Hunter holds the all-time top mark of 3:57.81 from 2016. Alan Webb was the first to break the mark in 2001.

Both Hunter and Webb also went on to break the mark over the outdoor season, with Webb owning an all-time best of 3:53.43.