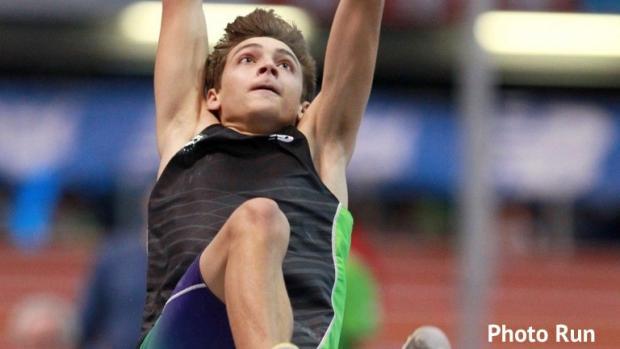 Over the next few weeks, the LSU signee will have a busy schedule, starting first with the World Indoor Championships in March competing for Sweden. The qualification period for the indoor championships began last January and Duplantis' marks from the indoor and outdoor campaign earned him an auto-qualifier.

He leaves for Birmingham, United Kingdom, on Feb. 21 and will return on March 5, which technically gives him enough time to potentially compete at New Balance Nationals Indoor from March 9-11, though that could prove to be a difficult turnaround.

Duplantis' efforts on Saturday were just his third competition over the winter season. He cleared 18-4.5 at the LSU Qualifier on Jan. 20 and a week prior he hit a career best 19-1.25 at the National Pole Vault Summit, though his new World Junior Record could not be ratified based on incorrect peg standards.

Wren Wins Second Straight Title: John Curtis sophomore Corey Wren returned to the event where he won a state title as an eighth-grader. On Saturday the dual-athlete earned yet another championship, exploding out of the blocks in a winning time of 6.82 seconds, his second straight impressive outing following his US No. 6 time of 6.80 seconds at the LSU Last Chance Qualifier. Wren's John Curtis squad also won a state indoor team title.

Burrell Nabs Big Victory: Zachary sophomore Sean Burrell continued to clip time off his 400m best, winning his first indoor title in 48.29 seconds. The time moved him up on the national leaderboard to US No. 15 and inched closer to the US No. 1 sophomore time of 48.08, which is currently owned by Justin Robinson of Hazelwood West (MO) High.

The performance also marked Burrell's fourth straight outing under 49 seconds. As a freshman, Burrell was able to drop a 48-point effort just once over the season.

West Feliciana senior Derius Davis had the fastest overall time in Division II, going a US No. 10 time of 48.22 seconds.

Sixth-Title Is A Charm: New Iberia Catholic senior Reagann LeLeux won her sixth straight indoor title in the pole vault, clearing a mark of 12-3.50, which marked a personal best at the meet. LeLeux, who owns a US No. 2 mark of 13-10 from Jan. 13 at the National Pole Vault Summit, likely will continue her season at New Balance Nationals Indoor.

Make That Seven For Primeaux: A year ago, Angelle Primeaux hauled in four state titles at the indoor championships, less than a year after back surgery had forced her into a hospital bed after NBNO. The Lafayette senior returned to the indoor championships to earn another three medals, this time producing wins in the 800m (2:19.03), 1600m (5:14.72) and 4x800 (9:57.37).