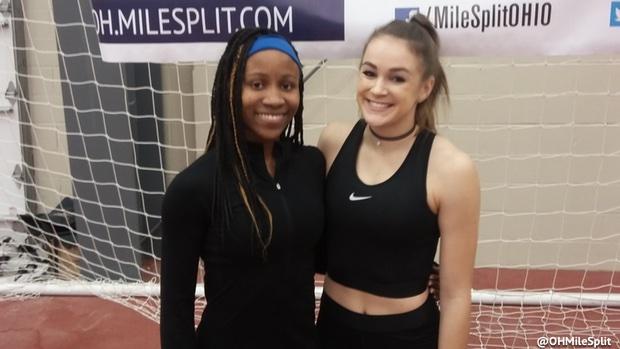 One of the most anticipated sprint matchups of the weekend lived up to the hype this Sunday at the SPIRE Scholastic Showcase in Geneva, Ohio. The battle was between two of the nation's top sprinters: Dublin (Ohio) Coffman's Abby Steiner and Rush Henrietta (NY) Sperry's Lanae-Tava Thomas.

We got a taste of the showdown to come as the two ran in the 60m dash prelims. Though Thomas owns a PR of 7.44 in the event, this was the first time this season that the USC signee had chosen to compete in the 60m dash. She did not disappoint, as she dropped a 7.48 in heat one of the prelims.

Steiner came into the finals with the faster prelim after she posted a 7.47 in heat four. In the finals, it was Thomas who would take home the "W." Thomas ended up running 7.39 for the third-fastest time in the country this year.

The 200m was a different story. Thomas had a slight advantage off the curve, but Steiner made up ground in the straightway and caught Thomas right at the line to run 23.60 for the new U.S. No. 3 mark.

Before the SPIRE Scholastic Showcase, Thomas was ranked MileSplit50 No.2 while Steiner was only a bubble athlete. We will have to wait and see how things shake up for the MileSplit50 after results are posted from the plenty of other big performances across the country this weekend.