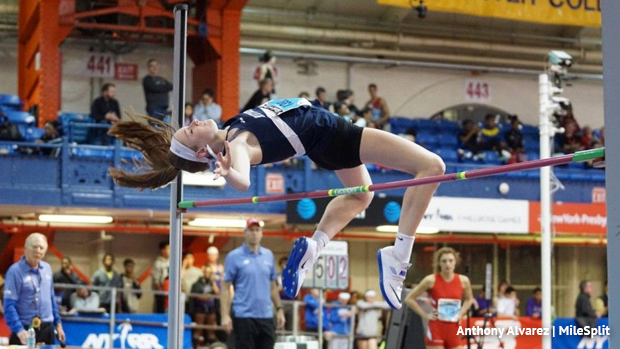 High jump standout Jenna Rogers from Rutherford High School in New Jersey is gearing up to take on the pros at the 111th NYRR Millrose Games at The Armory on February 3.

Rogers is currently the top high jumper in the nation with her clearance of 5 feet, 10 inches, which she achieved at the AT&T Coaches Hall of Fame Invitational back on December 16. That mark is tied for the third-best high school mark in New Jersey history.

Since then, she's cleared 5-4 to win the NJIC Indoor Track Championships, 5-7 to win the Garfield HS Shot Put / High Jump Invitational #2, and 5-8 to nab a victory at the Coach Glynn Holiday Relay Carnival.

She's undefeated so far this season.

The Rutherford sophomore holds the freshman class national record outdoors with her height of 6-0.75. She jumped that mark last year to win New Balance Nationals Outdoor. And previous to that, she went virtually undefeated, with her only loss coming at the NJSIAA State Meet Of Champions, where she still managed to clear 5-8 to for third.

Rogers will be facing off against some of her biggest competition yet, as she will jump against professionals Vashti Cunningham, Inika McPherson, and Priscilla Frederick at the 111th NYRR Millrose Games.

McPherson holds a PR of 6-4.25 and is a multiple time IAAF World Championship qualifier, while Frederick holds an indoor high jump PR of 6-2.75 and finished 14th in the 2016 Olympic Games.