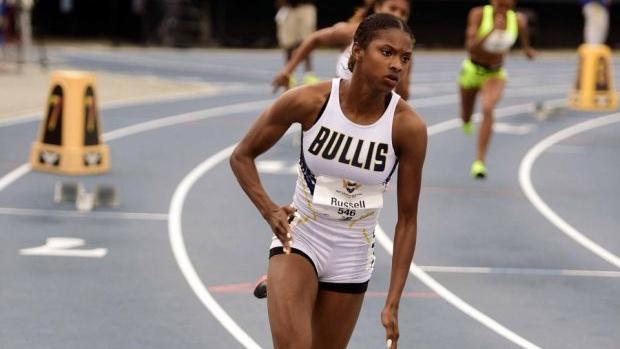 Bullis School (MD) High senior Masai Russell, a bronze medalist in the 400mH at the Pan American Junior Games in July, is already on pace to have a spectacular senior season with one of the best programs in the country. More than that, though, the Texas A&M signee, ranked No. 5 in the most recent MileSplit50 indoor rankings and No. 37 on our recruiting big board (before the indoor season), is considered one of the top track and field prospects in the country.

So what makes Russell motivated in her final season? She took some time to talk to MileSplit about her current season and future goals.

MileSplit: You've begun your senior indoor season and I'm sure there are a lot of goals on the table -- not only individually, but also as a part of Bullis School, a program considered among the best in the country. Has the season gone as planned thus far?

Russell: Yes, going to Bullis there are a lot of high standards coach (Joe) Lee holds us all to, but it always starts with character. Character over championships, he says, and we all believe that. But so far my season has gone well, I think. I've majorly PR'd in the 55 hurdles since last year. The beginning of the season is always a challenge, but I believe I'm progressing pretty well and so is our team as a whole.

2. What are some of your goals indoors?

Team goals: Our No. 1 team goal for this year (and every year) is to be the closest family in America, never the best team. As far as relays go, we have some pretty big goals, but we will keep those a secret for now!

3. One of your strengths is your versatility. Recently, you have featured in the 55m and 55mH all the way to the 500m. Where is your sweet spot?

I would say it depends on what we are focusing on for the season. Two years ago it was the 500m. Last year it was the 200m and the 400m. This year, I would say 55mH and 400m. Our coaching staff is extremely detailed and strategic in what we target. We set a very specific plan and then go after it with everything we've got! Knowing we have a plan going into each season gives us all a lot more confidence.

4. Who are a couple athletes you are looking forward to racing this year and why?

5. As a team, Bullis has developed a reputation for being incredibly strong in the relays, from the 4x200m to the 4x400m, and a lot of individual events in between. How does this team stay motivated and what drives everyone to succeed?

We definitely work hard in practice and I believe we all keep each other motivated, because we're all a family. We just don't use that as a saying, but we literally mean it. When one person is down we pick them up because we all have bad days. We also hold each other accountable to a higher standard of success.  The culture on our team is not competing with each other, but helping each other be the best we can be.  Our coaches also help a lot. We have like 11 or 12 coaches on our staff, so everybody gets specific support. They also give us motivational talks and encouragement, which helps a ton. Like for example, coach Lee told us the other day about the five Ts of Success. Talent is one of the Ts, but it's the LEAST important! The most important T is staying Together as a team. So I guess what drives us to succeed is each other!

6. Has the success of track and field rubbed off on everyone at the Bullis School, from students to administrators? How has your success created an atmosphere inside the school?

Nothing has changed really for us at school. Bullis is a top academic school, so it's always about being a student first! Our head of school, Dr. Boarman, and all of our administrators are so encouraging, but we are cut no slack in the classroom! Our entire school community is very supportive, though. Last year at an all-school assembly, they showed the girls and boys 4x200 wins from the Millrose Games. People were screaming and cheering like it was live! Our school is K-12 and the younger kids were treating us like celebrities. It was funny!  But we are always so thankful for our school's support and honored to represent them around the country.

7. You're coming off a career milestone, finishing second at USA Jrs. in the 400mH and getting the chance to compete for Team USA at the Pan Am Jr. Games. What was that experience like for you?

It was a fantastic experience; it was always a goal that I always thought was nearly impossible, but all the hard work we put in last year clearly paid off. Our hurdle coach (Derrick Johnson) knew I had it in me and kept pushing me to be my best in the event. Making the team was definitely a learning experience, so now I know what to look forward to in years to come. I also really love the family atmosphere and meeting everyone. It was one of the best trips!

8. Did you get to keep the jersey? Have you stashed it anywhere for safe keeping, or do you wear it often?

Yes, we actually received two jerseys and one of them is hanging up on the wall in my room and the other one is getting ready to be put up in my school showcase. The next time I am going to wear it will either be for pictures or maybe during the Penn Relays for my 400mH event.

9. You also signed with Texas A&M over the early signing period. The Aggies are a nationally respected program and legit national champion contenders every year. What went into your decision to run for the program? Also, what was one thing that stood out to you about Texas A&M -- or "the moment" that made you realize you wanted to run there?

The family atmosphere stood out to me the most as soon as I arrived on campus and met the team. The coaches were so welcoming and coach Lee and coach Anderson have a great relationship, which is going to make my transition to Texas A&M more smooth. My parents really loved it as well, especially my dad.  He coaches basketball, so he really has an eye for excellence in sports. My dad, my mom, and my siblings are my biggest fans. Texas A&M impressed them the most and we all agreed that this would be the best fit for me.

1. Album you must listen to before competition, or song that gets you ready to race?

Coach Lee actually doesn't let us listen to music before competition because he likes us all to warm up together as a team and family, but if I can sneak a quick song in it would either be 'Headlines' by Drake or 'Dark Queen' by Lil Uzi.

My role model would probably be Sydney McLaughlin. That might sound weird since we're basically the same age, but she's a hard worker, humble and she inspires me! I feel as though we're similar. And my mom too, of course, but she's definitely not an athlete! She's an oral surgeon, so yeah I would say she's successful too, LOL!

3. Who's the best at Twitter on the Bullis team?

I don't know...I think we're all really educated when it come to social media !

4. What's been your favorite moment running for Bullis?

Believe it or not it's when we lost not when we won!  My freshman year we missed the New Balance 4x2 finals by one spot. That hurt really, really bad! I say this is my favorite moment running for Bullis because it was a wake up call. It changed my whole perspective about my training and my goals. It made me never want to have that feeling again. I worked harder than ever and the next year in the 4x4 we made it to finals. We kept working and last year we won several national championships. Hard work really does pay off!