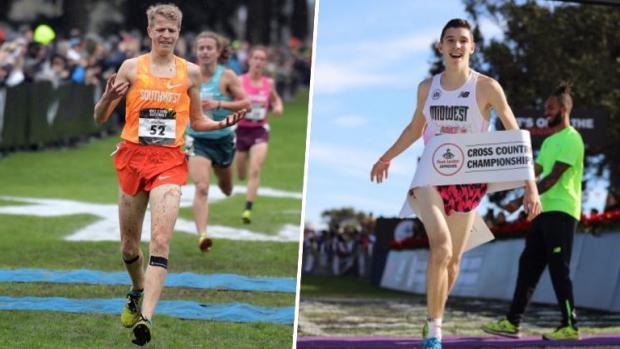 As we learned yesterday in our girls story examining who should win Gatorade's annual athlete of the year award, the organization has tended to lean toward winners from NXN over the last five years when picking an overall girls winner.

But that isn't the case on the boys side.

Generally speaking, Foot Locker Nationals still tends to get a stronger crop of boys in its field and has thus been the home more for the eventual Gatorade winner since its debut in 2007, with six Foot Locker champions getting the nod. A qualifier to that statement, however, is that in two cases the second-place winner at Foot Locker was also the winner of NXN, meaning there was little controversy when picking an athlete between the two races.

Gatorade will announce its boys winner in February.

In one more case, back in 2009, Sandburg (IL) High's Lukas Verzbicas became the only athlete to win in both races, finishing his cross county career with three national championships -- two at Foot Locker and one at NXN.

Perhaps the most controversy surrounding a Gatorade winner came in 2009, when Verzbicas won over Marcus (TX) High's Craig Lutz, who was the NXN winner and fourth at FLN.

But last year's eventual decision will prove to be a good case study, too. While there's no doubt American Fork (UT) High's Casey Clinger deserved to win Gatorade's annual award last year, it did bring precedent for runners competing in both events. Southlake Carroll (TX) High's Reed Brown, who was sixth at NXN, ended up winning FLN the very next week.

That matters now because of the eventual winners in 2018. Timpview (UT) High's Aidan Troutner mostly came out of nowhere to win NXN in a phenomenal effort, though he didn't run at FLN. Sandburg (IL) High's Dylan Jacobs followed a 13th-place outing at NXN with a big win at Foot Locker Nationals.

So is Gatorade's decision cut in stone? Not just yet.

A Qualifier For Jacobs

It's worth noting what kind of race Jacobs executed at Foot Locker Nationals. He was decidedly more chill from the gun in San Diego as compared to NXN, where he grabbed the lead at about the half-mile mark in Portland. At the same juncture at Foot Locker he was 15th. That measured approach gave Jacobs more energy storage with 3K to go, whereas at NXN that early move forced him to fade at the same position. Jacobs' race at Foot Locker only got stronger at 3K. And when it came time to make small or big moves in the final moments, he had enough left. Had he run the same race at NXN, Jacobs would have most likely been in the top 10 -- maybe even top five.

What about Troutner? There's no doubt he ran smart at NXN. He didn't get caught up in the fight up front, instead choosing to keep within striking distance as the top three went at it. When it came time for one last move, he laid down one of the meanest kicks you're going to see in a national championship.

There's also no doubt NXN had more depth. The top 30 in Portland ran 15:46 or faster. Only the top 11 were able to accomplish that same feat at FLN. So Troutner's win will naturally carry a little more weight. The Timpview senior, who earned a 201 speed rating from TullyRunners, finished in 15:03.90, two seconds faster than runner-up Brodey Hasty. Jacobs also ran smart at Foot Locker, though he didn't touch any records, winning in 15:19.70, a mark four seconds faster than the second-place runner. He earned a 198 speed rating. On performance alone, this variable goes to Troutner.

Troutner's game-changing race came at NXR Southwest, where he won in 14:50.00 and followed Casey Clinger as the heir apparent in Utah. Clinger went 14:42.00 in the same race the year before. But it's hard to say Troutner had many more races where he really made a name for himself nationally.

By virtue of his region, Jacobs was forced to show his cards in a number of races, winning one head-to-head battle in Illinois with Danny Kilrea at IHSA 3A Sectional (14:39.17), losing another at Mike Kuharic and then finishing sixth at the Class 3A championships to Kilrea and Clayton Mendez. He also went the fifth fastest time at Detweiller Park in its storied history.

Troutner had the fastest overall time at the Utah state championship (3-miles) in 14:48.80, but he hardly raced anyone of similar caliber on a consistent basis. In eight races, Troutner won seven times, setting a 3-mile best of 14:19.10. He went a 5K best of 14:50.00 at NXR Southwest.

In my mind, it's tough to give the athlete of the year nod to Jacobs because he was so up-and-down in 2017. Had he finished top five at NXN? Yeah, there's definitely more of an argument. But while he had a phenomenal race at Foot Locker and had more depth to his season -- and without question more competition -- it's hard to discount Troutner's finish.

I also believe that just because Troutner didn't race better athletes in Utah doesn't mean he wasn't the best runner all season. He proved at NXN that people slept on him. I would recognize his big win with another the national win from Gatorade.