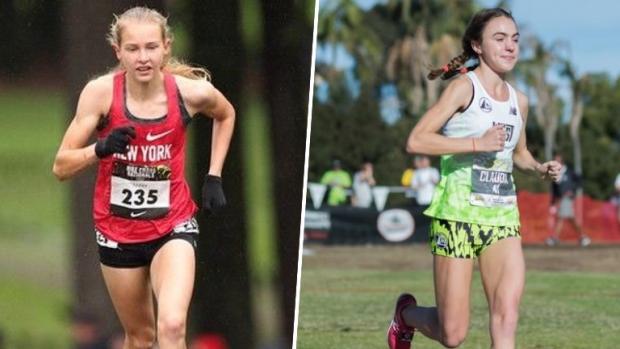 Since 2012, Gatorade's annual cross country athlete of the year award has gone to a particular athlete who has featured in a certain national championship.

In four out of the five years over that time, the winner of Nike Cross Nationals has eventually won the coveted title of Gatorade National Girls Cross Country Athlete of the Year, with last year's trophy going to Grandview's Brie Oakley.

The only Foot Locker Nationals winner to take that honor between those years came in 2014, when Mishawaka (IN) High's Anna Rohrer nabbed the victory from NXN winner and Alaska native Allie Ostrander.

So what will happen late this month when Gatorade announces its award to the best runner in the country over the fall? Will it go to Malibu (CA) High junior Claudia Lane or North Rockland sophomore Katelyn Tuohy?

No sophomore has ever been named national athlete of the year by Gatorade since it started honoring girls cross country athletes in 2007.

The answer may be more compelling than you realize. Since 2007, nine out of the 10 champions have been seniors, with Simi Valley junior Sarah Baxter winning the only title as a junior over that time.

Tuohy had an almost impeccable -- and legendary -- season highlighted by a win and new course record at NXN, but Lane matched many of Tuohy's records with several of her own in California, culminating with a win at Foot Locker Nationals on December 9.

At this point, both runners had two historic seasons capped with national titles. And they're both back for another go in 2018. So, what's Gatorade to do? They will announce the girls winner in early February.

We will examine some key races for both runners from 2017.

Perhaps the biggest point of contention will come down to the national championship performance. There's no debating Tuohy's remarkable run at Glendoveer Golf Course in Portland, Oregon, where she overcame poor conditions -- the boys chewed up the course beforehand -- and still managed to smash Katie Rainsberger's former record of 16:56.80 with an unbelievable effort of 16:44.70. Lane couldn't quite match that effort with a record of her own at Foot Locker Nationals, considering she had breathing issues heading into the race -- and traveled early to San Diego because of wildfires -- though she still came through with a PB on the course in 17:03.40 and outclassed the field by 19 seconds. They were both impressive, but Tuohy wins this matchup. According to speed ratings calculated by noted TullyRunners.com, Tuohy earned a 172, while Lane punched home a 165. Interestingly enough, Lane's mark would have put her at 39th place in the boys race of 40 contenders at Foot Locker, while Tuohy's would have put her 137th place in a field of 199 boys.

For Katelyn Tuohy, her game-changer came at the Manhattan Invitational, when she threw down in the C race for a 32-second course record at Van Cortland Park, posting a time of 13:21.80 at 4K. There's just no way to quantify how much this caught people off guard. Tuohy had run well at the Red Raider Run at 3-miles and in her Section 1 race, but Manhattan immediately put her in another stratosphere on October 14. Lane didn't start running until October 4, though her moment came one week later on October 21 at Mt. SAC, when she torched Baxter's former mark of 16:00.00 with her 15:49.00. Consider that many cross country fans admired Baxter's 2012 season as one of the best in history and then weigh where Lane's mark stands to this. Both meets were long-storied, with countless performances to compare from -- though Mt. SAC's finish was altered slightly because of construction. Still, this seems to be an even tie.

It's a tough decision, but based on all the facts, Tuohy has earned the distinction and should be awarded the top prize in girls cross country.