It's an exciting time at Jacksonville Bolles (FL) School, which became the sixth Florida school to secure an entry into NXN after the boys squad's second-place bid at NXR Southeast on November 25. Mike Rivera, a former assistant on the Columbus North (IN) boys program that eventually qualified for NXN in 2010 and 2011 -- Rivera had moved to Florida by then -- had learned under the tutelage of Rick Weinheimer, who led Columbus North to a third-place finish in 2010. This will be Rivera's and the Bolles School's first appearance at NXN.

1. MileSplit: What was your immediate reaction upon learning your program had finished second at NXR Southeast and had come away with a really fantastic performance in one of the country's most talented regions?

Rivera: Excited and extremely proud, as I could not stop the tears. These boys listened to their coaches and believed in each other. They knew what type of race was needed and they got after it. They gave it their all for 5000 meters.

2. Some may have seen that as a surprise, but others may not considering comparative performances. Where did you see your boys qualifying on a scale of one to 10 in terms of "not surprising" to "craziest thing to ever happen."

I would say a seven. Going in I thought we had a chance at third and an at-large -- based on all the talk of NXR SE finally getting one. I told the boys we could be anywhere from second to fifth. A funny side note: As they announced the top 10 teams and (Green Hope) as third place, Chase Rivera said, "Well, we are either second or 11th." The boys were looking great right before the mile and all the coaches -- Steve Stam and Matthew Morris who have been invaluable -- and parents made eye contact and knew that this could be something special -- just got goosebumps typing this part. A parent took a great photo at about the 500-meter mark and all the guys were lined up in a great front position.

3. Was there a memorable team moment after SE that speaks to what you were able to do on that day?

The excitement in the gathering area at the finish line was incredible. We all knew we were in the hunt, but we just had to wait. The boys, coaches, and parents were a bundle of joy because we all knew that they had put everything out on the course. At this point, we were not going to have any regrets, no matter the finishing position. As awards started, the entire Bolles entourage was bouncing around and super chatty. All involved had a sense that they were about to be part of a very special moment. I watched videos of the announcement from several perspectives -- I've done it multiple times every day -- and I've gotten choked up every time. At that moment of pure joy, every step of every run of every day was rewarded.

4. Did you set your expectations for a top-two finish at NXR SE looking at the field? How do you discuss with your program what you wanted to accomplish heading to WakeMed for the second time this season?

The team's expectation was to put ourselves in position to advance. The coaches know that we race better than virtual rankings because of the oppressive heat and humidity in Florida. Most times for workouts and races, the sum of the temperature and the dew point is in the 150s and 160s. In Cary that morning, the sum was 98 and the guys were loving it.  The boys know that we train through in-season meets and could feel workouts getting easier and easier. We raced Great American and Manhattan on tired legs. For example, goal times for 1000s of 3:10 in September which were accomplished in an exhausted 3:20 were now becoming 3:03 with a comfortable, efficient stride. They know to control what we can control and ignore everything else. All three coaches kept reinforcing that they had a chance, a puncher's chance to do it and they trusted us. 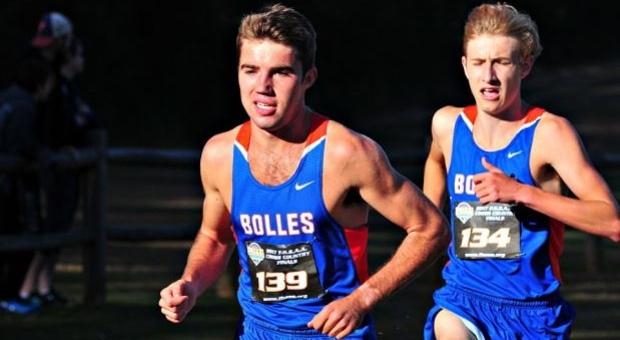 5. The surprising element to this can mostly be attributed to results from this year. You finished seventh at Great American, behind Loudoun Valley, Green Hope and St. Xavier, all teams which were at NXR Southeast -- interestingly enough, Bishop Hendricken (RI) finished fifth, and they qualified for NXN out of the NE, too. At Manhattan, you finish seventh at Eastern States, against four other eventual NXN teams in CBA, FM, Green Hope, and Corning. So what did those meets tell you about your team? Did you feel they were barometers for success?
These two meets gave us experience with fast starts and tight quarters. Each boy learned from these meets and made appropriate adjustments. We were a little down after Great American, but were in high spirits after Manhattan. After Manhattan, the team was ready for the State Series and then a chance to race in Cary, NC, again.
6. When did you sense your team was beginning to "kick it in," or realize their potential? Was there a specific meet or month when you begun to see all the training start to click?
To be honest, there were times in September that I thought we might not make the podium (top two) at our own state meet. One day at practice -- end of September, beginning of October -- I told them that some had stopped doing things and routines that had made them fit such as pull-ups in the doorway, core on their own, eating healthy, drills the correct way, etc. They took this to heart and made changes right then.  Even though we finished seventh, Manhattan brought the competitive fire back. Minor injury issues, which lingered a little longer than expected, started to work themselves out around this time and we could all see the outward positive an upbeat attitude returning.
7. Charles Hicks has been on the national radar all year as your team's No. 1, but your compression in most meets has been near or below 60 seconds, meaning this team really is deep. And you have four juniors in the top five who are going to be back, including Hicks. How would you characterize your team as a unit?
This team reminds me of the great teams I had the privilege to be around at Columbus North. They are tough and love to train and race. What is too tough for everybody else is just right for us. They do everything together. As a team this summer, we read "Running with the Buffaloes" and saw comparisons between their team-bonding and ours. This is where "Monster Island Distance Project" started and why we picked that to wear at NXR SE. These guys love to compete whether it is in practice or in a race and they all want to be breathing fire.

8. What sets this team apart from past teams?

Most importantly, commitment and dedication. When I first started at Bolles, there would be only two or three guys who would meet for summer conditioning. Sometimes, it would be two coaches and no athletes. The girls, who have a great program under Tony Ryan, would have 20-30 runners attend. One boy runner went to a summer running camp in 2013. This had to change. Bolles has an enrollment of under 800 students so the boys team does not get very large, especially with the success of our swimming and football programs in the fall. However, the team has grown from less than 20 to more than 50 over the span of five years.

9. What kinds of goals did you set at the beginning of the season? Have you met them and are you surpassing any of those goals now?

Here has been the progression of goals over the years:

-Be competitive with Bishop Kenny (local powerhouse in Jacksonville)

-Be competitive with our region

-Be competitive with our state

-Be competitive with all teams across the country

Two years ago, the team was young and struggled at the state meet where we finished fifth (best in a long time), but thought we could do better. This is when I told them that to be great you have to understand greatness. Since then, our focus has been on what it takes to be great and what we can do to be great. This focus has been part of our daily repertoire. NXR SE was on our schedule solely as a means to get in a good-weather race and gain some experience for the future. NXN is beyond this season's goals, but we are all ecstatic to be here and our going to race hard as usual.

10. How have you set expectations for your group going into NXN on December 9 in Portland?
Nothing has changed. The boys will control what they can and ignore everything else. They will compete as hard as they can and we will see what happens. They will do the racing and the coaches will do the thinking. They trust this process.
11. Does this year's success build momentum for next year?
Definitely yes! The guys are talking about national indoor meets, New Balance Nationals Indoor, outdoor meets such as Arcadia and Texas Distance Festival. Creekside High School in Florida made the podium last track season with just distance runners and we would like our guys to make a large contribution to the team score and shoot for a podium finish. I'm sure that their experience this weekend will fuel the fire to come back to Portland. From top to bottom, NXN has opened their eyes to great accomplishments and experiences that may be in their future. Everything that we do is a key experience that they will recall every time they toe the start line.