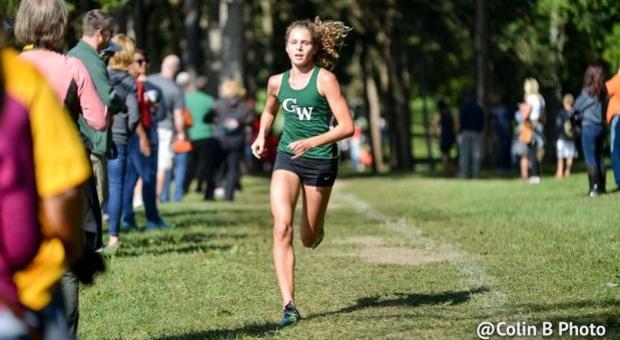 One year older, one year wiser.

A year ago, Hart was almost entirely new to cross country. She ran 100 percent in races and trained on feel, thinking that instinct would be her best plan toward success. That ultimately granted her a state cross country title in Illinois and a trip to NXN, where she finished 18th.

But Hart couldn't help but feel a little worn out by the end of the season. Some part of her felt like she could have fared better at NXN, been a little more prepared.

This time around, Hart says, she's learned a thing or two. She's conserved more energy across the fall and now wears a watch exclusively when training alone, keeping to splits and running less on instinct and more based on structure.

She's also added another national meet to her schedule. A year ago, during that three-week break between NXR Midwest and NXN, Hart felt like the period was too long. So this time around, she added another regional to her schedule, racing at Foot Locker Nationals on November 12.

She finished second overall to Lansing Catholic (MI) High senior Olivia Theis, a University of Michigan recruit, and now will race in back-to-back national meets for the first time in her career.

She's ready for it.

"I think it's good to run with some of those girls at bigger meets," Hart said of Theis and Christian School of Knoxville's Rebecca Story, Malibu's Claudia Lane, and North Rockland's Katelyn Tuohy. "Obviously, the competition is great. But branching out is a good thing, too."

Hart didn't surprise anyone this year. A former gymnast and soccer player who focused more time then ever on running over the offseason, Hart was out in front in every race.

But she performed as consistent of any athlete across the country this fall, too, dominating Illinois over the season and picking up a U.S. No. 9 time in the 3-mile (16:08.70) and her second straight Class 3A title.

"I learned to race a little more strategic," Hart said of her development.

She didn't lose once at 3-miles over a three-month stretch. But like a lot of national-level talents, Hart ran solo for much of that body of work, too.

Read: Kellee Hart Supports Her Daughter 100-Percent In Her Passion For Running

"The thing that I've settled with is running alone in my state, but going into these national meets, it was uneasy," said Hart, who also picked up two state titles in track this past spring. "It was weird and it freaked me out."

Picking up the Foot Locker Midwest Regional race was a conscious decision to prepare herself for NXN. It was also another opportunity to see what she could do against some of the nation's best. Tuohy and Lane, after all, are racing in separate meets. Hart will have an opportunity to see both in back-to-back weeks.

Hart knows she's also part of a remarkable sophomore class. She was one of five freshmen in 2016 to finish in the top 20 at NXN. That included Tuohy, McKinney North's London Culbreath, Mountain View's Lexy Halladay, and Fayetteville-Manlius' Claire Walters.

"It's kind of cool to say I'm a part of that class and it should be fun to see how we all do," Hart said.

Her goals, while secret, are even greater this year. She has aspirations to improve upon that performance a year ago, an 18:01.50 effort that was good enough but possibly not great in Hart's eyes.

"Last year I put a lot of pressure on myself to do well," Hart said. "This year I'm going in and I have to be confident in my training. I have to stay relaxed and not stress until that hour before the race.

"I have some internal goals, but I have expectations for myself, too."

While Hart doesn't have a personal coach, she says she's figuring out what works best for her training. Her mother, Kellee, has experience in running and her dad, Chris, is a former state championship quarterback at Glenbard West who knows a thing or two about competing.

"I think as a freshman I just didn't know how to train on my own," she said. "I stuck with my teammates. This year, I pushed past that and I'm more accountable on times and pacing on runs."

It's helped that Hart, who posted a time of 4:46 for the full mile in June, has had talent beside her. Senior Lindsey Payne, who finished fifth at state, has been one of Hart's most best training partners.

As for those other sports? Hart decided to give up gymnastics before high school, but she's kept at least a little soccer in her future, playing occasionally in the offseason -- she defends the wings.

"I'll keep doing that in the winter," Hart says. "The transitions between the seasons, it gets my mind off things. I do like changing it up."

But Hart knows her future is in running.

Soon enough, Hart will find out where a year of experience has taken her in cross country.