Would you like to see definitive national champions earn their individual titles this fall in cross country?

It isn't going to happen.

The reason, of course, is because Nike Cross Nationals and Foot Locker Nationals are making it nearly impossible for the best runners in the country to go to both of their events through scheduling conflicts and an unwillingness to compromise at the expense of the other.

We might not see arguably the best boys distance runner in the country, Flo50 No. 1 Brodey Hasty, vie for two national titles. And we're definitely not going to see the best girls matchup this season -- Flo50 No. 1 Katelyn Tuohy vs. No. 2 Claudia Lane -- take place in December, because each has already determined their end of season plans, and neither are going to change them at this point.

Tuohy has plans to run at NXN and isn't adding Foot Locker Nationals, even if it was possible; Lane is looking for a repeat championship at Foot Locker. The duo have run the two fastest speed ratings on the girls side in the country this year.

Hasty, who was third last year at NXN, is an athlete with a week open on his schedule. He's already locked for NXR Southeast, a qualifier for NXN, though he's hoping for a possible opportunity to race at Foot Locker because wants to prove he's the best in the country.

Unless something changes, he might not get his wish. Because historically these two events haven't compromised for West Coast, Northeast and Southeastern athletes to compete at their events.

In 2015, when Loudoun Valley (VA) High graduate Drew Hunter tried to pursue racing in both events, he was shut down by an NXN meet director who wouldn't move his race -- both qualifiers were on the same day.

Think about that for a moment. Hunter was willing to race twice in one day to make sure he had the chance to compete in both events. He was willing to travel 120-plus miles to make it work. And he needed an hour of wiggle room to make it happen.

NXN didn't budge with Hunter, who ultimately won Foot Locker Nationals in 2015 and later signed with adidas when he turned pro.

Loudoun Valley has a good relationship with Foot Locker. Ideally, the Vikings would like to run their best seniors at the event again this year, but there's too much on the line for a team championship at NXN and it's always going to be team over personal gain.

This ultimately tells the story of two meets unwilling to work with each other.

That's not to say these events aren't great for the sport. The races have been lauded nationally and recognized for putting emphasis on team and individual success. Athletes respect their institutions and what they've been able to do for the exposure of the sport.

But history also plays a part, too. Foot Locker Nationals is an event with a tradition of over 30 years. NXN is rarely new on the scene. Neither wants to give up ground in a marketing and brand war.

They've been trading athletes in recent years based on scheduling conflicts, and the narratives surrounded by those races have been "what if?"

What if Drew Hunter or Edward Cheserek or Anna Rohrer or Aisling Cuffe raced NXN? What if Casey Clinger or Brie Oakley or Sarah Baxter had raced at Foot Locker Nationals?

The question isn't whether these races should collaborate on bringing the best talent together, but more in how they could do it. Would they be willing to do it? What's stopping them?

Ultimately, Foot Locker Nationals would need to change its qualification process. It would need to rewrite its procedure to award an exemption, or "golden ticket," to the top five finishers from NXN who haven't qualified for their event because of scheduling conflicts. 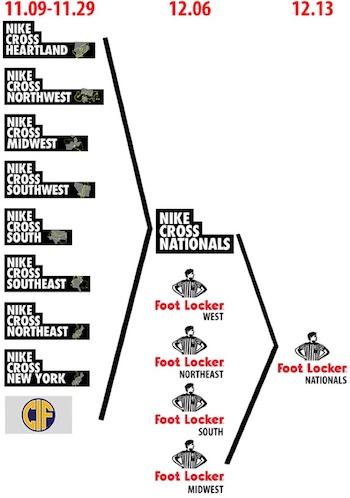 In 2014, FloTrack's Gordon Mack wrote similarly to this, citing the benefits. By adding NXN as a qualifier, it would allow potential athletes to race less.

If NXN and Foot Locker Nationals are truly growing the sport of cross country, they need to recognize what the impact of having a true national championship would mean.

Each organization shells out (hundreds of) thousands of dollars to fly athletes out, stay in hotels, and race on their courses for a chance to vie for a national title.

So why not recognize the symbiotic relationship? The benefits, other than great brand awareness and good faith -- otherwise known as "playing nice" -- is that it's good business. It's really good business.

Fans want a clear champion in both team and individual races and that requires the best athletes overall.

There's a clear distinction. While NXN certainly devotes resources and efforts to host some of the best individual talent in the country, the event's focus, at its heart, is the team competition, where a true national champion emerges. Foot Locker Nationals, meanwhile, has a smaller field and a clearer focus on deciding the best individual cross country talent in the county.

These two races have different objectives -- that shouldn't take away from an individual NXN title, which still retains its luster. Casey Clinger, after all, is still known as an athlete who won two-straight NXN titles.

But Clinger also did not get a chance to run at Foot Locker Nationals like Lucas Verzbicas did in 2010, winning both. Neither did Brie Oakley, who won NXN on the girls side. Over the years, we've seen these issues take shape.

Shouldn't the winners of NXN have a chance to go head-to-head against athletes who have qualified individually for Foot Locker?

In the past year alone, there was a lack of crossover between the top athletes in the country. Below, we list last year's preferences for the top 10 athletes on our current boys and girls Flo50 rankings in 2017.

There's no doubt some athletes have their preferences. There's factors of region, loyalty and convenience. But for those who have ambitions to race in both events, sometimes the opportunity isn't even applicable for them.

There are eight regions in NXN -- and a ninth, in California, is succeeded through an overall merge of the state's championships race. Foot Locker Nationals has four regions.

The conflict comes down to competing schedules.

"He would love to run Foot Locker," coach Guy Avery said of his athlete, Brodey Hasty. "But the regions are on the same darn day."

Runners who choose to race at NXR Southeast are unable to race at Foot Locker South since each race is held on November 25. That's also the case for NXR New York and Foot Locker Northeast.

For runners who decide on NXR Northwest and Southwest, that remains an issue as well, since the Foot Locker West Region is on December 2, the same date as NXN.

Could Foot Locker Nationals find out a solution to make it the decisive "individual national championship"?

The impetus shouldn't be on NXN to hand out these tickets, but rather on Foot Locker Nationals to add athletes to their field who wouldn't have a chance otherwise.

Mack wrote last year that it was the first time in which the top-ranked runner in the country (Casey Clinger) wasn't able to race at Foot Locker Nationals.

But if you were to ask athletes with strong programs -- who qualify for NXN -- what their preference would be, they would almost always choose the team over any individual success.

That's a given. And it's the right attitude.

There's no reason that individual success can't have its day, too.

That's why we need to advocate for a solution at these two events. We have one of the most talented crops of girls runners in some time -- and guess what, Tuohy and Lane will be back again next year.

The same goes for Hasty. He has a chance to claim two titles. And he's going to go for an NXN title on less than a handful of races this fall.

Avery is an advocate of the pairing and in a best case world says "athletes could compete at both" because at the end of the day each "are great events for the kids, who just want to compete."

According to Mack and previous to this year, 12 championships were awarded at both NXN and Foot Locker Nationals over that span. In that time, in eight out of the last 12 outings the NXN champion was defeated by the Foot Locker title-winner.

So how can we solve this conundrum?

The answer isn't simple, but perhaps a golden ticket would help.