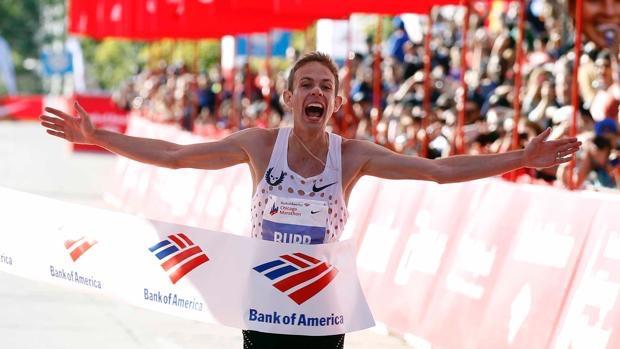 CHICAGO -- History was made Sunday at the 2017 Chicago Marathon as 31-year-old Galen Rupp became the first American to win the event in 15 years in 2:09:20, while Rupp's fellow American and Nike Oregon Project teammate Jordan Hasay finished a stunning third in the women's race in 2:20:57. With the time, Hasay broke Joan Samuelson's Chicago Marathon U.S. course record and is now the second fastest American woman in history.
Rupp waited patiently for the majority of Sunday's Chicago Marathon, biding his time as the pace stuck around 2:11 tempo for large portions of the race. But once Rupp went between miles 23 and 24, not even defending champion Abel Kirui could match the American's speed. Rupp's 4:30 mile split sealed the first victory by an American man in Chicago since Khalid Khannouchi in 2002, and gave the U.S. 10,000m record holder his first major marathon victory. It was the first victory by a U.S.-born man in Chicago since Greg Meyer in 1982. The Kenyan Kirui finished second in 2:09:48.
After a tactical first half, Rupp ran the second half in 63:09. He has now PR'd in each of his last three marathons.

What a day for @OregonPJT. @JordanHasay breaks American CR is now the 2nd fastest American ever! 2:20:57 pic.twitter.com/KPc34bO81H

"Words can't describe the feeling," an ecstatic Rupp said on the post-race broadcast. His coach, Alberto Salazar, embraced Rupp after his pupil crossed the finish line, with tears flowing after watching his athlete secure a major marathon victory in just his fourth career marathon.

The slow early pace jelled perfectly with the race plan Rupp and Salazar had established, which was for Rupp to wait for the pack to naturally dwindle and then move as late as possible, or when the timing felt right.

"Wait until the end, unless you feel really good, and then if you sense weakness, throw a few little pickups in. If you see people start to get gapped and sense that perhaps they're vulnerable, then at that point really go for it," Salazar said of the race plan afterwards.

While Rupp further established himself as one of the world's top marathoners, it was yet another frustrating day for several of the men who once counted themselves among that prestigious group. World record holder Dennis Kimetto failed to finish on Sunday, his third marathon in his last four attempts that he was a DNF. Fellow Kenyan and 2:03 man Stanley Biwott did not finish as well, his third straight DNF. Both men have struggled with injuries in recent years.

Now that Rupp has secured a convincing victory at one of the world's premiere marathons, the only unanswered question seems to be how fast of a time he is capable of. All four of his marathons have been tactical, but the finishing speed he showed today suggests Rupp can run 2:05 or faster. The  American record is held by Khannouchi at 2:05:38.

Rupp isn't tipping his hand about how fast he thinks he can run, saying that he doesn't want to limit himself, but he is confident that the fast times are on their way.

"I've run against some pretty good people that have run pretty fast. I know that in the right circumstances, with good weather, good pacing, good course, everything, I do believe that I can run a lot faster than I did here," Rupp said.
Rupp said on Friday that he was in his best marathon shape ever entering Chicago, and he validated that claim by easily gliding away from Kirui in the latter stages of the race. The 31-year-old told us that his speed was the area of his training that went missing as he struggled with injury in his Boston Marathon build-up, but that it had returned with his health before Chicago. That was evident as Rupp took advantage of the slow early pace to conserve his energy and strike with a full tank at 23 miles.

Like Rupp, Tirunesh Dibaba has quickly vaulted herself to be among the world's best marathoners after committing to the race full time, with a 2:17:56 and now 2:18:31 in just her second and third career marathons, respectively. The Kenyan Bridgid Kosgei was second in 2:20:22.

For Hasay, she was no match on Sunday for Dibaba, who ran the second-fastest time in race history. But the historical significance for the 26-year-old American far outweighs her placing on Sunday, as Hasay appears well on her way to marathon greatness. Sunday was just her second career marathon, and both races have been home runs, as Hasay was third in Boston in 2:23 -- breaking the U.S. debut record by nearly three minutes -- and now has just Deena Kastor above her on the all-time American list (2:19:36). Hasay was fearless on Sunday, hitting halfway on American record pace in a stunning 68:50. As expected, she fell off the very ambitious pace, but today Hasay announced her presence as one of the best women's marathoners in the world.

The American followed Dibaba and company through the lightening quick opening miles and was still stride for stride with the eventual winner at halfway. Hasay would lose contact with Dibaba at around 14 miles, and seemed to really pay for her early aggressiveness in the 10 kilometers between 30K and 40K. Hasay split 34:36 there while Dibaba covered the same terrain in 33:08. But Hasay finished strong, running a 5:17 last mile to slip under the 2:21 barrier, proving that her decision to stick with arguably the greatest distance runner in the world was a wise one.

"I just thought, 'You know what, I'm just going to go with how I feel.' I was actually feeling pretty good. It was a bit scary looking at the lead cart and looking at the projected times. At one point it was saying 2:17," Hasay said.

"I had to definitely be really brave," she added.

While Rupp took the victory on Sunday, Nike Oregon Project coach Alberto Salazar joked that it was actually Hasay who took the day's top honors in his book.

"I told Galen, 'Hey, I'm glad you won today but I'll tell you right now if there is a performer of the day for the Oregon Project, I gotta give it to Jordan.' She gets the candy," Salazar joked.