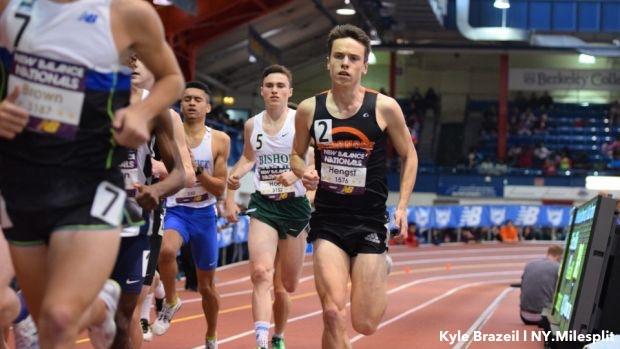 Dalton Hengst is one of the top returning cross country runners in the nation. And he has an interesting story! The rising senior at McDonogh (Maryland) School actually resides in York, Pennsylvania, but during the school year in Maryland he boards on campus at McDonogh. Hengst, who finished the spring track and field season with national-caliber performances in the 1500m (3:54.90) and 3200m (8:56.96), has been ripping off superb performances in cross country since 2014 and a year ago placed 21st at Foot Locker Nationals. His season best 5K from 2016 was 15:11.20. This year, Hengst is looking to hit under 15. Check out his weekly training blog as he prepares for his final high school season before college.

After the Nike Elite Camp and my family's beach trip to Ocean City, Maryland, I'm back in York, Pennsylvania, for training. The plan this week, other than regular distance runs, was to get in a solid tempo run, a tough hill workout and a good long run.
Monday: 6 easy miles
Tuesday: 8 miles in 55 minutes
Afterwards, I ran five strides. I've felt a bit rough these past two days, as I've been battling some sickness, but these two days of easy work should help my body recover a bit.
Wednesday: 8 miles
Today I wanted to do a tempo run for 3-4 miles. But instead of just going out to a local trail and doing it, I decided I'd go to a small 5K course and do the tempo there. I ended up running 15:45 with pretty even mile splits, so I was happy with it. I finished with eight miles total for the day.
Thursday: 7 miles at 6:10 pace
Friday: 11 miles
Today I wanted to do some hill work. The workout was 3x1.2 mile hill repeats. I was hitting around 7:10 pace through the mile on each rep. The hill has a 10-percent grade, so the rep wasn't too much about time, but rather about getting up the hill as best I could. My dad was in his car at the top of the hill, so once at the top I would hop in his car and he'd give me a ride back down to the bottom. The rest was 3- 3:30 minutes between each rep. A guy I occasionally run with in the summer, Matt Marcini -- a 2004 Olympic Trialist in the marathon -- always said that long, gradual hills are one of the most beneficial things for distance runners. So taking that advice, that's where I got the idea to do such long hill repeats. After the workout, I did some speed and agility drills. Later this evening, I did 4 more miles.
Saturday: Off
My coach and I thought it would be beneficial to have a days rest to recover and have a good long run tomorrow.
Sunday: 11 miles at 5:50 average pace.
Total Mileage: 51 miles
Overview: This week of training was great. I battled a little sickness at the beginning of the week, but I felt better as the week went on and got a nice hill workout in and great long run. Next week I'll bump up to 60 miles for the first time in my running career.
Related Links:
Varsity Boys 1 Mile Finals Music City Distance Carnival Jun 4, 2018
Dalton Hengst, first place, boys' mile New Balance Indoor Grand Prix Feb 10, 2018
MileSplit LIVE: Examining The Millrose Games Boys HS Mile NYRR Millrose Games Feb 1, 2018
Boys 1K Finals Section 1 The VA Showcase Jan 21, 2018
Josh Hoey 2:24.64 -- AAU Boys 1K Finals Section 1 The VA Showcase Jan 20, 2018
Boys 1 Mile Finals Section 1 The VA Showcase Jan 20, 2018
Tweets by milesplit