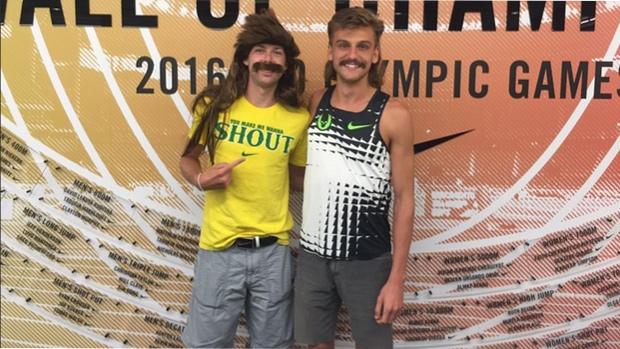 By Johanna Gretschel, FloTrack; LinkThe most famous mullet in track and field is leaving Oxford, Mississippi, for Portland, Oregon.
Craig Engels, the Ole Miss middle distance runner and Pfafftown Ronald Reagan (NC) High graduate who captivated the nation with his 1980s-inspired haircut at the NCAA Championships, announced last week that he is joining the Nike Oregon Project (NOP).
He's not sure if his hair will make the move with him."I'm in so deep with [the hair], the only way out would be like a charity or a GoFundMe to cut it, so I can raise money and donate the money for a good cause," he said. "Otherwise, people aren't gonna like me anymore."
One of his new training partners will be Matthew Centrowitz, the reigning Olympic champion at 1500m, who sported a new platinum blonde look at the USATF Outdoor National Championships in Sacramento.
"I think it's a good look for him," Engels says of his new teammate's hair. "I think he's a good-looking dude. I'll have to ask him how it works with girls."
They'll be roommates soon -- briefly, anyway -- as Engels will live with Centrowitz for a few weeks in St. Moritz, Switzerland, to train and maybe squeeze in an 800m race, he says.

"Hopefully we become bros and he doesn't think I'm a loser," Engels says.

Jokes aside, the 23-year-old Engels is one of the most promising middle distance runners in the United States. He was fourth in the 1500m finals at the USA Championships behind Robby Andrews, Centrowitz, and Johnny Gregorek, missing out on the world team by 0.02 seconds. 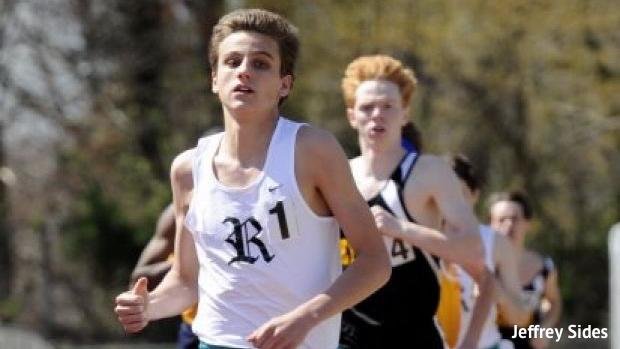 *Engels at Reagan (NC) High, where he was a state champion in the 800m and 1600m
Engels rose to prominence last year by placing fourth and fifth in the finals of the 800m and 1500m, respectively, at the U.S. Olympic Trials, which was a huge result after placing just seventh in the 1500m final at NCAAs.
While he was disappointed by the fourth-place finish in Sacramento, he looks fondly upon the Olympic Trials experience.

"I know most people are devastated by fourth place, but I was so pumped," he says. "That drove this whole year."

He needed the momentum after breaking his clavicle while snowboarding in January. But once Engels returned to Oxford for the spring semester, the Ole Miss trainers took a much more progressive approach and got him back on the ground running in 10 days.
"When he said 10 days, I was like, 'I'm going with your opinion. I don't care if it breaks again,'" Engels said.
There were All-American honors and NCAA titles on the line, yes, but, as a fifth-year senior, Engels was also looking to post some quick times and establish himself as worthy of a shoe contract.

He was running again by January 17 and racing again by early February. In March at the NCAA Indoor Championships, he ran the 1200m leadoff leg on Ole Miss' title-winning distance medley relay. Then Engels proved he was 100-percent in April when he ran 3:37.75, a near PR in the 1500m, versus NCAA indoor mile champion Josh Kerr of New Mexico. The following June at the NCAA Outdoor Championships, Kerr again held off Engels for the win as the senior would have to settle for third in his final collegiate championship race.
"I try and never count myself out mentally," Engels said. "I think that's where a lot of guys go wrong, and I aways go in really confident that I'm in peak shape."

We're happy to announce that our newest client, @craigathor (Craig Engels), has signed a professional contract with @NikeRunning pic.twitter.com/3c4AEnLEWc

The day after the NCAA 1500m final, Engels met with Ray Flynn and Matt Sonnenfeldt at Elmer's Restaurant to sign with Flynn Sports Management. Engels was college teammates with Sonnenfeldt at NC State for one year before his transfer to Ole Miss.

"I knew I was going to go with them from way far out," Engels says.

What wasn't set in stone was Engels' shoe sponsor. Once an offer from Nike came in, he still had to decide which of its pre-established training groups to join or whether to accept the shoe contract and remain in Oxford, where he could finish his MBA program and continue to train with Rebels coach Ryan Vanhoy, whom Engels credits with resurrecting his passion for the sport after spending two years with on-and-off injuries at NC State.
"I was trying to keep as many options open as possible so we could have leverage," Engels says. "But as soon as Nike said I had the option of doing the Oregon Project, I was in."

Engels will work mainly with coach Pete Julian and not Alberto Salazar, whom Engels inadvertently introduced himself to four years ago at the 2013 USATF Outdoor Championships.

"Some guy was cheering Mary Cain on and I went up and tapped him on the shoulder and was like, 'Are you Mary Cain's dad?' and he was like, 'No, I'm her coach,'" Engels recalls. "I don't think he remembers that, so that'll be funny to talk about one day."

When Vanhoy encouraged Engels to go with NOP, it was enough to sway the Pfafftown, North Carolina, native.

"Vanhoy didn't gain anything out of sending me there, but he was very adamant it was a good position for me," Engels says. "Most people aren't that altruistic."
Vanhoy had some prior insight to NOP due to his being the former coach of current NOP member Eric Jenkins, whom he worked with during a yearlong stint at Northeastern in 2013; the following year, Vanhoy would leave to assume his current position at Ole Miss while Jenkins transferred to the University of Oregon. Jenkins just made his first world team by placing second in the 5K in Sacramento behind Olympic silver medalist Paul Chelimo.

While Engels could have joined NOP during the USATF Championships, he decided to wait until he was able to make an official visit to Portland and meet all the major players.

During USAs, he got a text from Galen Rupp, a two-time Olympic medalist and one of NOP's most successful athletes. "This is what you have to look forward to if you join," the text read underneath a photo of Rupp wearing a mullet and mustache wig with Salazar's son, Alex. 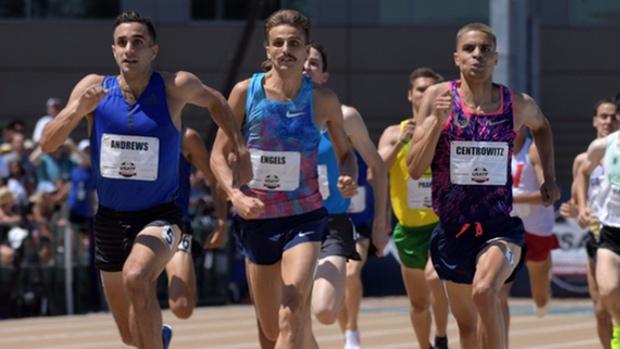 That photo was the precursor to what would NOP's now-infamous social media post announcing Engels as its newest member.
"I didn't expect it out of him but Galen's a funny guy," Engels says. "I don't know Galen. I only see how the media portrays him, so it's been cool to see what he's actually like."

The same goes for any accusations of doping in Salazar's camp. Salazar and his athletes have always denied any wrongdoing, and no one involved with the NOP has ever been sanctioned for any drug-related offense.

"It's an awesome group of guys and I hate that there's a negative connotation or air around them," Engels says of his new group. "I've been asked about the accusations since joining and obviously, I don't know anything, but I trust him. I sat down and had lunch with him. Obviously, I'm never going to do anything to further myself by doping."

Engels had visited the Nike campus in Beaverton, Oregon, once before his official visit just a few weeks ago -- he ran a workout there with teammate Issac Presson before the Olympic Trials in 2016.
A year later, he's still wowed by the facilities. He sat down for lunch with the likes of Sonnenfeldt, Alberto and Alex Salazar, Rupp, John Capriotti, and Paul Moser from the corporate team and made his decision to join NOP pretty quickly after that.
"We ate lunch on (Nike co-founder) Phil Knight's desk... no, I'm just kidding, we went to the Nike dining hall, it was a casual lunch," he says. "We talked about pranks. After I had lunch with them, I realized how they really are as people and made my decision to join."

Cool throw back from 2011 when @craigathor was contending for a 4A XC State Title: Senior Spotlight: Craig Engels- > https://t.co/QbYpNB0geO pic.twitter.com/MQ73m4NQ5B

The next steps are a bit ambiguous as Engels still wasn't 100 percent sure of his travel plans as of this weekend. But whenever he returns to the United States from Switzerland, where he may or may not race an 800m, he's planning to race the Sir Walter Miler in Raleigh on August 4, where he hopes to break four minutes in the mile for the first time in front of his friends and family.

Engels set a 3:35.95 personal best for 1500m at the TrackTown Summer Series stop in New York, which is worth about 3:53.16 for the full mile. His official personal best for the mile is 4:01.19, set in February 2015, although he claims not to remember exactly what his PR is and says it might date back to high school -- it isn't a bad guess; he ran 4:03.96 at the 2012 adidas Dream Mile.
While things are coming together for Engels, it's a far cry from what he envisioned for himself as a college freshman.

"I still thought running was not cool back then," he remembers with the laugh of someone whose "back then" is still not that long ago. "I just thought pro runners sat around on their couch all day and just ran. It never became a big dream until I came to Ole Miss.
"The past few meets [for the TrackTown Summer Series], we've been hanging out with the Hoka guys and Brooks Beasts and it's been cool, they're all bros. I guess here at Ole Miss, we have a lot of fun and we still run and run well. Coming here [to Oxford] made me realize there's not just one way to run fast."
Carolina Distance Carnival Highlight Video Carolina Distance Carnival May 07, 2022
Craig Engels Prepped For His US Title By Watching Old Matthew Ce 2019 USA Outdoor Track & Field Championships Jul 29, 2019
Men 1 Mile Finals Section 1 Sir Walter Miler Aug 09, 2018
Jakob Ingebrigtsen Wins Payton Jordan 1500 Payton Jordan Cardinal Invitational May 04, 2018
Men's Elite Mile - Drew Hunter Over Craig Engels 3:57 Sir Walter Miler Aug 05, 2017
Craig Engels Loved The Home Crowd At Sir Walter Miler Sir Walter Miler Aug 05, 2017
Tweets by milesplit