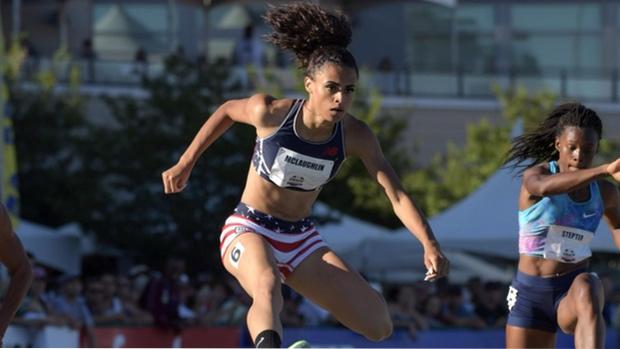 Sydney McLaughlin is ready for a new challenge.

The 2016 Olympian in the 400m hurdles, recent Union Catholic (NJ) High grad and incoming University of Kentucky athlete told espnW recently that she will be transitioning out of the 400m hurdles for at least her freshman year with the Wildcats after lowering her World Junior Record twice this season -- to a time of 53.82 seconds.

The back-to-back Gatorade National Girls Player of the Year recipient said she plans on competing in the short hurdles and jumps in her debut season with the Wildcats. Kentucky coach Edrick Floreal also confirmed to espnW that McLaughlin will in fact shift to the short hurdles and possibly to the jumps as a freshman.

"I think I'm going to take a break from 400-meter hurdles my freshman season and go back to things I used to do, like long jump and short hurdles," McLaughlin said ."I had to take a break from those because of injury. I think the first year really is just going to be a lot of fun for me. I haven't done short hurdles since my sophomore year of high school because of a groin injury, so I'm really hoping to get back to that."
McLaughlin's 53.82 clocking from last week's USA outdoor championships is nearly three-quarters of a second faster than Sage Watson's winning time in the NCAA 400m hurdle final. And none of the returning women from that final have even broken 55 seconds.
McLaughlin's indoor 400m PR of 51.61 would have been third at this year's NCAA indoor final, while her 49.85 second outdoor split at New Balance Nationals Outdoor in the Swedish Relay suggests she can run in the low 50s, which would place her in contention for the win at any NCAA outdoor final. -- Courtney Okolo is the only collegiate woman who has ever run under 50 seconds in the open 400, though plenty have split sub-50 in the relay.
In a recent interview with MileSplit after winning the Gatorade National POY,  McLaughlin spoke of her goals as a freshman at Kentucky.
"I think next year is just a fun year," she said. "I spent four years in high school focusing on the 400m hurdles and I think me and my college coach talked about it and we kind of want to take a break from it. We want to get back to things I used to do like long jump and short hurdles. And you know, kind of have fun my first year before the years come up and the Olympic year in 2020."
On getting back to the long jump, McLaughlin said she looked forward to the opportunity.
"I do," she said. "I think they're much more fun than the 400m hurdles."
She specifically mentions doing the long jump and short hurdles. According to her MileSplit profile, she hasn't run the 100 hurdles since finishing second at New Balance outdoors her sophomore year.
McLaughlin has only long jumped twice this year, both indoors; her 20-7.75 mark would have finished tenth at the NCAA meet. Even if she actually does take next year off from the 400 hurdles, she'll still be incredibly valuable to Kentucky.
FloTrack's Dennis Young contributed to this report