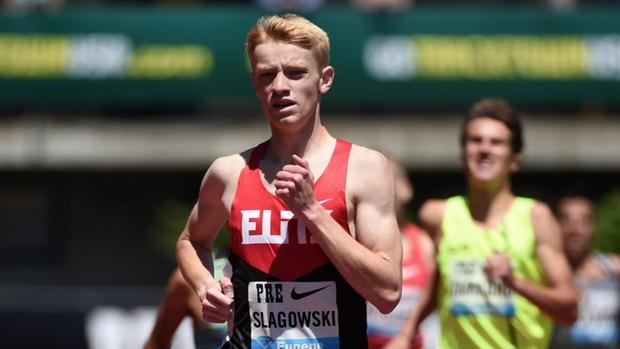 Rocky Mountain (ID) High graduate Michael Slagowski, the eighth fastest high schooler miler of all-time and the ninth prep to break the four minute barrier, has announced that he will enroll at and compete for NAIA program Eastern Oregon University beginning in the 2017-2018 season.

The Meridian, Idaho native returned to his hometown this spring without an immediate plan after spending one semester at Penn State. The 20-year-old told Track & Field News that injury problems were his primary reason for leaving the Nittany Lions. He said he has never fully recovered from stress fractures and stress reactions in his left foot that first presented themselves in May of 2016, in between his two sub-four minute miles. Even now, he is only running three to four days per week.

He will join an Eastern Oregon program led by veteran coach Ben Welch, who enters his 27th year as the head men's and women's cross country coach and 16th year as head coach of track and field in the 2017-2018 school year. His men's cross country team has qualified for the NAIA National Championships in 20 of the last 25 years and placed 12th out of 36 teams last fall.
"It will definitely be like a fresh start going to Eastern Oregon and I'm not really putting any pressure on myself based off what I did in high school," he said to T&F News.
Slagowski is one of just four athletes to break four minutes in the mile more than once while in high school; that number includes national record holder Alan Webb as well as Jim Ryun and Drew Hunter.

He clocked his first sub-four minute mile last April in 3:59.53 at the Nike Jesuit Twilight Relays in Portland before the injury first flared up. He ran through the pain because he wanted to experience racing the Prefontaine Classic as a high schooler, where he ultimately ran 3:59.78 in late May.

After Pre, Slagowski took most of the summer off and resumed training in September when he enrolled at Penn State. He raced a 1K in January, clocking 2:28.51 at the Penn State National, before taking time off again in February. By March, he was no longer listed on the Penn State roster.