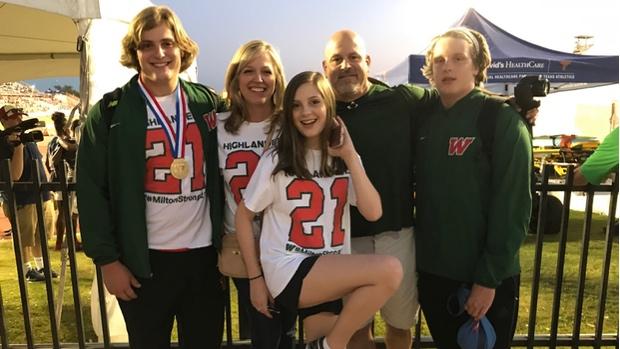 Adrian Piperi is the father of three children, including sons Adrian "Tripp" Piperi III and Patrick, who compete for recent University Interscholastic League Class 6A track and field champion The Woodlands (Texas). Tripp, who signed with the University of Texas in November, owns the U.S. No. 1 mark in the shot put and is U.S. No. 15 in the discus. He's a four-time state champion in Texas and earned championships at USATF Junior Nationals and IAAF World U20 Championships. Here, Piperi writes about what it is like to raise a family of throwers and what it takes to keep them on the right path.

I've been the father of track and field throwers for 10 years now. But I can remember when it first started for my two boys. I enrolled Tripp in the MC Express Track Club at the encouragement of a good friend who thought it might help our sons get in good shape for the football season. It's there where Tripp met his high school coach, too. Gary Madore had a son Tripp's age. Funny how that happens.

Without ever picking up a shot put before, Tripp winged it and finished third. A few weeks later, he won a few meets and qualified for the AAU Junior Olympics in Tennessee. At that point, I figured he was pretty good at it.

The next five years or so, he won a few Junior Olympic titles in shot put and discus. But by then I already knew he had a future in throwing. His little brother Patrick eventually followed in his footsteps.

But let's fast forward to junior high school. Ultimately, I had to accept the fact that I didn't know everything. I felt it was important to outsource my limited skills as a "two-step" glide throw coach and weight trainer to professionals who had more knowledge than I did. By doing so, I could be a dad and my boys could learn more than what I could offer.

Eventually, the boys forged a great relationship with Madore, who's still the throws coach at The Woodlands High -- and a linebackers coach for the football team. He saw potential in the boys and sometimes invited them to throw with the high school kids. Little did I know, he was coaching me in some small way, too, because he encouraged me to teach them more.

Eventually, they moved up in age and in class and began working with Madore, who had also had a boy that became friends with Tripp. And that's where Madore and I struck up a friendship, too.  Since Tripp's freshman year in high school, both boys have been training under his guidance. He could take a kid who had never thrown anything in his life and teach him the skills to glide, rotate, you name it. He's been one of the best support systems we've had over our boys' high school careers.

The strategy they've been given has been pretty consistent: eat, throw, lift, eat, rest. Summer track ends usually in late July. Once the season ends, they usually won't pick up a shot put or discus again until October.

It gives their body, brains and muscles a long needed break from the season. But during that break, they lift at school -- sometimes in track class -- and then lift after school with their trainer, Cisco Marentez, who focuses on the muscle groups they don't work on that same day. The lifting schedule is nonstop, Sunday to Friday, though some days are heavier than others, some days lighter and some days they even mix in some yoga.

Track season in Texas usually kicks off the first full weekend in January at the Texas A&M Indoor Classic, but since Texas doesn't govern an indoor season, we've been doing this on our own for the last few years. Indoor season usually includes two to four indoor meets and ends in mid February. But by then, we're ready for outdoor!

Weight training during the season is pretty intensive until late March. Coach Madore and Cisco confide in one another, and usually back off the heavy lifting until after the state qualifying rounds have concluded.

The calories Tripp and Patrick consume during this time are both eye popping and impressive. They have light meals in the morning, a big lunch, a big snack, then dinner, desert, maybe another snack, a protein shake .. and then another snack before bed.

Patrick didn't listen to me right away. As a freshman, he weighed 185 pounds, while Adrian was about 230. I would tell friends he couldn't decide whether he wanted to be a thrower or an underwear model. But he finally accepted the fact that in order to throw farther, he had to get stronger and eat well. He figured it out and two years later he's added almost 40 pounds since the beginning of last track season. 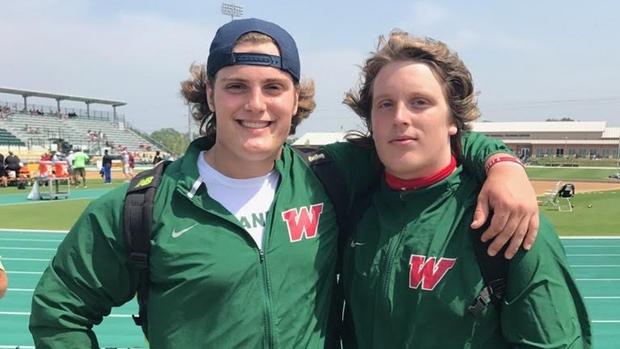 Tripp has hovered between 250-260 for  most of his senior season. He's very mindful of what he puts into his system and tries hard to avoid sugar and fat. Every Sunday he heads to the grocery store and spends somewhere around $150 on ground beef, turkey, chicken, beans, rice and veggies. He spends two and a half hours cooking his meals for the week, stuffing them into special Tupperware containers and cramming them into the back refrigerator. It's pretty impressive watching him cook. And I don't even think about stealing one of his meals -- he will seek you out and let you have it.

Currently both boys are taking a few weeks off for finals and healing their bodies. It's been a long, grueling season. Both boys plan to compete in Greensboro, North Carolina, at New Balance Nationals Outdoor in June. The following week, Tripp will try out for the U20 Championships in Sacramento in an effort to make his third National team representing Team USA.

He's also a future Texas Longhorn. He's looking forward to moving to Austin this August and will compete for the Longhorns and work toward earning his degree. As much as we will miss having him around, I will not miss the food and training bill ... these things get expensive!