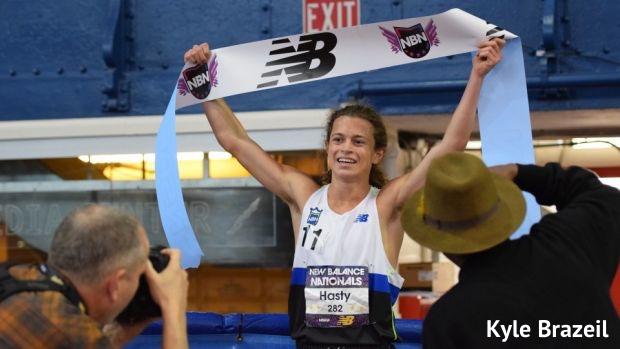 Just about the time Brodey Hasty was finishing his thought, another one came into his head.

"I mean…wait, what was my time?" the Brentwood (TN) High junior said. "I didn't even check!"

He can be forgiven for that. Hasty, the New Balance Nationals Indoor champion with a U.S. No. 1 winning time of 8:45.16, had a lot on his mind on Sunday at the Armory in New York City. In some respects, he finished as the biggest surprise winner across the national competition.

Not only had he broken nine minutes at the distance for the first time in his career, but in doing so the five-time Tennessee state champion beat favorites DJ Principe of Rhode Island, a Stanford signee, and Noah Affolder of Pennsylvania, who signed with Syracuse.

"Everyone knew that DJ and (Noah) were going to be there," said Hasty, whose previous best in the 2-mile was accomplished in February in a time of 9:18.85. "I wasn't necessarily the favorite to win this."

For good reason, much of the pre-meet hype in the 2-mile went to Principe, Affolder, and North Carolina's Connor Lane, another Stanford signee. Principe had been the closest high school runner to breaking four minutes in the mile this year.

Many expected those three to battle it out for a win.

But Hasty, who finished third at Nike Cross Nationals in the fall -- and who had out-kicked Principe at the Great American XC Festival last October -- came out of hiding early.

"I knew both of them were going to go out fast," he said of Principe and Affolder. "I wasn't necessarily planning on taking the lead. I was just taking a nice draft position, and I was just waiting and waiting and waiting. Those are two of the best guys in the country, so running with them brings the best out of you."

But Hasty had to ask himself an important question very early.

He didn't flinch. Taking control when the chance came, Hasty went for it and even felt secure coming around the last turn heading toward the finish.

"About 50 meters to go coming off the last corner, I passed Noah, and I could just feel he wasn't going with me," Hasty said. "I didn't know where DJ was, but I knew if I kicked hard enough, I had it. I was like, 'I'm going to kick hard enough.'"

Hasty was second at the Millrose Games in the 1-mile dating back to Feb. 11, running a 4:08.04, so he had the leg speed. And he had proven experience as a winner, capturing two indoor, one outdoor, and two cross country state titles over the last three seasons.

But sometimes, moments are made on big stages. Hasty certainly proved that Sunday. 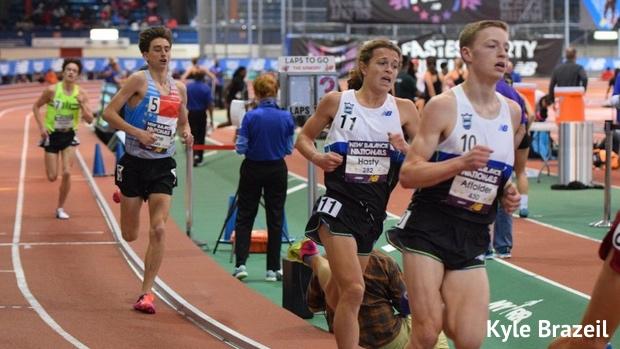 More from Hasty's interview after the race:

Did you feel less pressure having favorites in the race…

Yeah, because I know DJ and Noah know how to handle that a lot better than I do. So taking that pressure of my shoulders was nice.

You kicked with DJ Principe at Great American last fall. Did that help you at all…

I know that I got a decent kick. I knew if I was near him, I would be able to stay with him even if he out-kicked me. Because I knew he would be able to run the same time I would, probably would have a little more left. He's a four-flat guy.

What's your race moving forward, the 1-mile or the 2-mile…

There's a mix in there this year. Last year it was primarily mile. This year, I'd say there is quite a few miles there. But there's a lot of 2-miles intertwined. Probably, the mile is the end of season goal.

So is most of your training based around the mile …

Lately, it's been incorporating speed with the distance. Because I knew I would run the 2-mile here, and I wanted to see if I could go out to Arcadia (in California) this year. I've been doing the 2-mile stuff, but also we're coming up here for DMR. So we wanted the mile speed in there, too.

What's one fun fact about yourself…

What's the coolest place you've been…