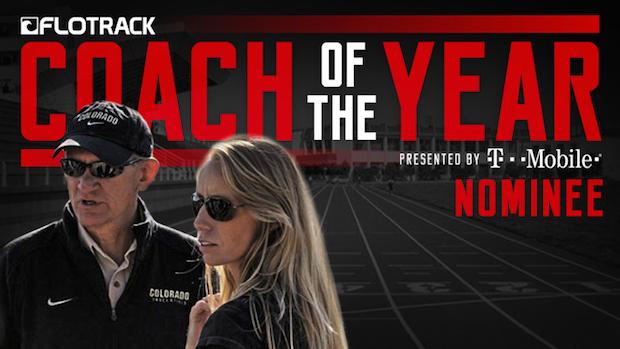 Colorado head coach Mark Wetmore and associate head coach Heather Burroughs are two of the top coaches in the U.S., having mastered the art of training successful collegiate athletes AND professionals in Boulder, CO. Jenny Simpson and Emma Coburn competed for Wetmore and Burroughs while at CU and now have solid, shiny proof for why staying with your coach after college works--two Olympic medals.

"2016 was a special year. Jenny and Emma in Rio were the obvious highlight, and we were particularly happy with the twin Pac-12 titles," Burroughs and Wetmore said. "But we get it that we have a lot of advantages: good weather and facilities, courageous and righteous athletes, and too much help to list. The U.S. is the best track country in the world. There are so many excellent and unheralded coaches on every level. We're humbled and gratified to be considered among them."

Simpson and Coburn made history this summer at the 2016 Rio Olympics when they both earned bronze medals in their respective events. Both were firsts for American women at the Olympics. Coburn never finished outside the top three at Diamond League meetings and recorded the No. 1, No. 2, No. 3, No. 8, and No. 9 times in U.S. history for the steeplechase, including a new U.S. record of 9:07.63. Simpson was the top American in the 1500m at the Pre Classic, claimed the U.S. championship over Shannon Rowbury, and dipped under 4:00 in Paris and Zurich. Her bronze medal was the first 1500m Olympic medal ever earned by an American woman.

The coaching duo of Wetmore and Burroughs led the Buffaloes to back-to-back men's cross country titles in 2013 and 2014. And though 2015 didn't result in a championship, both Colorado's men and women finished runners-up in Louisville, Kentucky, an impressive feat for the coaching tandem. In 2016, both teams swept Pac-12 titles, with the CU men earning their sixth straight conference win after a lackluster Pre-Nats performance. The Colorado women finished third at the 2016 NCAA XC championships, the men took sixth, and seven individual Buffs earned All-American status.
For the past decade, FloTrack has traveled the planet covering our sport and seen up close what a struggle it can be to compete at the highest level. Unlike in much of the rest of the world, it's tough for U.S. runners to find a coach who can devote enough time. Most professional coaches here either really work as college coaches or are sponsored by a single shoe company. To support the great work our professional coaches do, we're announcing the FloTrack American Distance Coach of the Year, presented by T-Mobile. Later this month, one coach will win $10,000 for his or her work with American distance runners in 2016.
By Meg Bellino