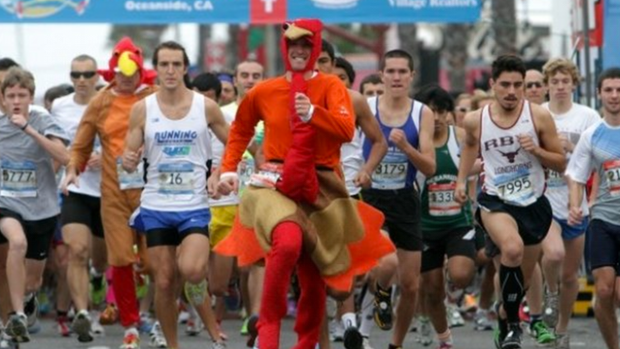 By Lincoln Shryack for FloTrack

Like food comas and painfully awkward conversations with Aunt Sue on politics, the local turkey trot is a Thanksgiving tradition inherent in the American experience of this glorious holiday. With the massive onslaught of calories to come, runners and non-runners alike take to the roads to justify that fifth (or sixth) piece of pie, and for some, the 3.1 guilt-induced miles will satisfy their cardio requirement for the entire year. And if you've ever run a Turkey Trot, I'm sure you've met a person or thirty who told you as much. It's a strange collection of people that convene on the starting line of this cult phenomenon, with attire ranging from running shorts to turkey costumes to that guy who thinks he's hilarious for running bare chested in 20° weather. Don't mess with that guy, he's capable of anything.

You're sure to meet many birds of many different feathers at your local Thanksgiving 5K, with several trots attracting upwards of 25,000 people annually. My local race growing up in Springfield, Mo averaged around an 8,000 person flock each year, which exposed me to all sorts of characters unique to this specific event. Below, I've used this space to list some of my favorites.

Here are the 9 people you meet at a turkey trot:
Tweets by milesplit