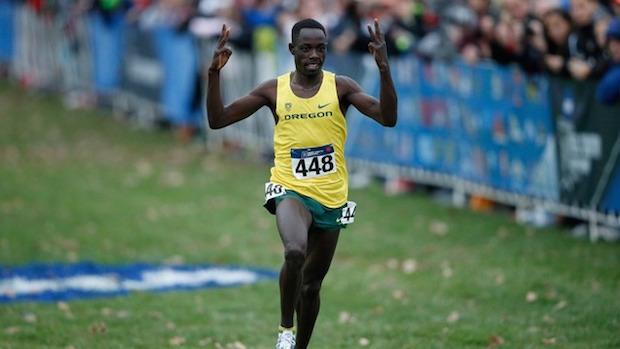 In our weekly programming rundown, we highlight the best live coverage and original storytelling coming up across our network of sites. If you have Apple TV or Roku, you can watch all of these live events and documentaries on your TV at home. This week's slate of events is highlighted by the NCAA Division I Cross Country Championships, which will be streamed live on FloTrack on Saturday, Nov. 19.

The nation's best collegiate runners will toe the line this weekend to vie for individual and team championship honors. Oregon senior Edward Cheserek is looking to become the first man in NCAA history to win four individual cross country national championships. If the Northern Arizona men win, they'll be the first men's team from outside the Southeastern Conference, Atlantic Coast Conference, Big 12, Big 10 and the Pac 12 to win in 35 years. The women's individual race is equally thrilling. In the most wide-open race in years, the University of Michigan's Erin Finn, New Mexico's Alice Wright, University of Notre Dame's Anna Rohrer, and Boise State University's Brenna Peloquin will vie for their first NCAA title.

New England's premier mixed martial arts promotion returns to FloCombat this Saturday with NEF 26: Supremacy. At the top of the card, former teammates Ryan Sanders and Jon Lemke throw down to settle a longstanding and heated rivalry. After training together at former UFC veteran Marcus Davis' Team Irish in Bangor, Sanders and Lemke took different paths. Sanders left Team Irish for rival gym Young's MMA, while Lemke stayed put under Davis' tutelage. There's only one way to find out who will win once the cage door closes.

The road to ADCC begins this Saturday. The winners of this no-gi tournament will receive a chance to compete in the 2017 ADCC submission fighting world championships held in Helsinki, Finland. Garry Tonon, Gordon Ryan, Nathan Orchard and Masher Khera are among among those registered to compete.

The IBJJF Pro series is rolling into Manhattan this weekend, and some of the biggest names in the sport--including Gianni Grippo, Joao Miyao, and Mahamed Aly--are ready to compete for the chance to win $4,000.

Roy Jones Jr. brings a cast of some of the hottest up-and-coming prospects in the nation to FloBoxing LIVE on Friday, Nov. 18. Juan Sanchez, son of former title challenger Agapito Sanchez, leads the undercard in this one. U.S. viewers can catch all the undercard action live on FloBoxing then finish with the main card on CBS Sports. Outside the U.S., FloBoxing will stream the event in its entirety, including the NABA USA lightweight championship main event between Reynaldo "El Trampolin" Blanco and Demond "body Shot" Brock.

The nation's top remaining recruit, Daton Fix, is set to make his decision. Who will land the No. 1 132-pounder in the country? Oklahoma State, Penn State, Ohio State, North Carolina, and Nebraska are all still in the running.

What a tough weekend for the Hokies. Kick your Friday night off the right way as Virginia Tech opens with a road trip inside hostile West Gym against a young and talented Northern Iowa squad.

The Flo Kickoff Classic sits just behind Tulsa Nationals (also a Roller Productions event) as the most competitive and prestigious tournament in youth wrestling. Winning the Kickoff Classic makes a wrestler eligible to capture the elusive Trinity Award -- the most sought-after and reputable prize in youth wrestling. Many of the greatest high school wrestlers of the past 15 years, including Bo Nickal, Chance Marsteller, and Aaron Pico, became All-Americans at the tournament.

For the second straight weekend, Edinboro hosts an in-state rival looking to pull an upset.

The Michigan State Open is one of the premier opens around the country, and this year is no different. Expect to see starters from Michigan State, Central Michigan, and possibly some other Big Ten schools.

Penn State leads the way this Sunday in the city of Brotherly Love. Get your first look at Nick Suriano, Jered Cortez, Zain Retherford, Jason Nolf, Bo Nickal, and the rest of the Nittany Lions. Northwestern, Pitt, Appalachian State, Harvard, and Eastern Michigan will all be in action as well.

New Big 12 member Wyoming looks to pick up one of the biggest wins in program history as the Cowboys welcome Big Ten power Nebraska to Laramie.

The marquee dual of the early Division I season is live on FloWrestling this Sunday! Expect fireworks from four ranked matchups with an amazing atmosphere at Jesse Auditorium.

For two straight nights, PWX is bringing in some of the best indy pro wrestling stars from around the globe for its second annual X-16 Tournament. Wrestling stars like Zack Sabre Jr., Trevor Lee, Davey Richards, Matt Riddle and more will be all be competing in the 16-man tournament. The opening round begins on Saturday at 6 p.m. CDT with the final rounds taking place on Sunday, starting at 3 p.m. CDT.

For its FloSlam debut, American Combat Wrestling put together one of the most stacked cards in history. The ACW Heavyweight, Cruiserweight and Tag Team Championships will all be put on the line. The main event pits heavyweight champ Sean Swag against long-time rival C.J. O'Doyle. The action begins 5:30 p.m. CDT.

Trinity Thomas: Beyond The Routine (Ep. 1)

Junior National Team Member Trinity Thomas has the complete package: raw talent, power, a positive attitude, and unparalleled work ethic. In this installment of Beyond the Routine, we take a look inside Trinity's life and training. Episode 1 reveals Trinity's path from an energetic child who flipped and tumbled around the house to a polished, stunning international elite gymnast.


It's coach Eric Heins' last year. Mike Smith is in as the coach-in-waiting. Futsum Zienasellassie redshirted in 2015, and he's back just for this moment. The 2016 Northern Arizona Lumberjacks only have one thing on their minds: win the school's first-ever national championship. "So, my legacy that I'd like to be able to leave is that, when Eric was here, his teams--they always showed up, they were always competitive when it mattered most, they brought a great sense of pride to the campus, and Northern Arizona University." -- Coach Eric Heins