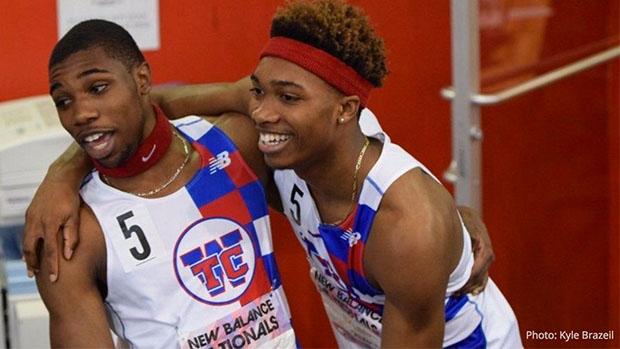 As of last week, Noah Lyles isn't just a professional athlete--he's also a first-ballot, unanimous inductee into the Homeboy Hall of Fame for insisting that if adidas was going to sign him, they had to also sign his younger brother Josephus.

It was a deal the sportswear giant made good on by not only extending them both contracts, but also offering to pay for their college education.

As a result, Lyles' candidacy for the Homeboy Hall of Fame--which founder Bomani Jones explains is for "those who have gone to great lengths to protect, assist, hook up or advance the careers of their brethren"-- is so compelling that the selection committee waived the usual five-year waiting period like he's Wayne Gretzky.

Though they both just finished their senior year of high school, Noah turned 19 last week and Josephus turned 18 four days later. For their birthdays, the brothers signed contracts with adidas.

Noah is an obvious candidate for early investment from a shoe company. After breaking a 31-year-old national high school record at the Olympic Trials, he's the fastest American high schooler to ever run the 200m. In fact, no American collegian ran 200 meters faster than Noah Lyles did this season (20.09). And after winning the 100m last week at the meet formerly known as World Juniors, he's clearly the best male sprinter under age 20 on the planet, and one of the best junior sprinters ever.

Lyles isn't just a really fast guy who drones on about executing, either. He's an extremelycharismatic and entertaining interviewee who talks a massive game and often backs it up. In short, Noah Lyles is a worthy heir to throne of the American sprinting scene, and a smart addition to the adidas team at age 19.

But before adidas could lock in Noah, they also had to pony up for Josephus. Noah said in an interview before signing that if he were to go pro, he and Josephus were a package deal. And he meant it, as Josephus is now an adidas athlete as well.

Josephus is every bit as charismatic and funny as Noah. He's also fast as hell--his 60m PR is faster than Noah's, and he beat his older brother three times this indoor season. But he's orders of magnitude shy of what would typically merit a pro contract for an 18-year-old.

Josephus has won exactly two outdoor Virginia state titles. Last year, he finished second at the IAAF World Youth Championships (for under-18 athletes). His 45.46 400m PR, while stellar, makes him the 15th-fastest high schooler ever--a distinction that has, as far as I can tell, never led directly to a professional career out of high school. In fact, Josephus wasn't even the best high school 400 runner in the country this year--that would be Michael Norman, who beat the younger Lyles by half a second at Arcadia.

But now, Norman is off to USC, and Noah and Josephus are off to the bank. The Washington Post reported their professional contracts include a college tuition guarantee, which is already more than any NCAA school could offer Josephus. No scholarships are fully guaranteed for four years. And even if Noah is making tens of thousands of dollars more, Josephus is still functionally receiving a scholarship plus some salary. Adidas never would have written checks to Josephus if Noah hadn't insisted on it.

And for that, Noah Lyles is a Homeboy Hall of Famer.