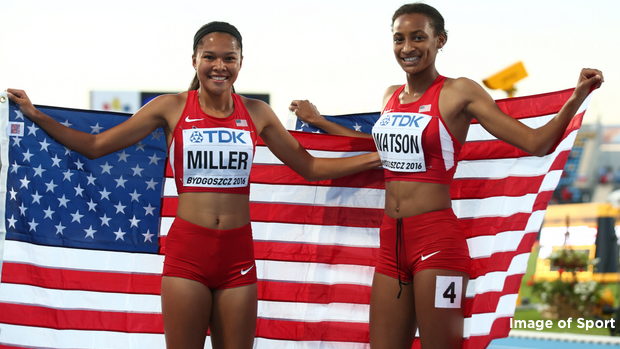 July 21: Finals Day
Again, I didn't race until 8:45, so I really did sleep in today. Did the same thing as the day before, waking up around 12ish and then going to the fitness room the stretch and get in the normatec boots.
We got to the track around 6:15 and then I just slowly warmed up. I felt good getting ready for the race, I got stretched and my legs felt loose. Before going to the call room one last time, I put on my spikes to get some strides in on the indoor track. I felt ready, and had the mindset to win! Going into the call room it was very nerve wrecking, to think all of the hard work I've done all comes down to one race is crazy. But I stayed calm and focused for the race! It was so cool to have the announcers call us out one by one, having the smoke blast up before my race! Especially hearing my teammates just screaming with excitement for Sammy and I. I knew we were ready to do something big!
Once the gun got off, I got out hard to try and avoid being boxed in. I was towards the front on the rail most of the race, trying to stay up with the front pack. We didn't go out as fast as I'd thought we'd go, so once we hit 400 I knew it was about to be a kickers race! Once we hit the 600 mark everyone started to make their move to the front, while I got pushed to the back of the pack. I just told myself to stay calm and relaxed and just make one final big move at the end. Which is exactly what I did, I hit the 700 mark and just gave it all that I had left! At that time all of my teammates were just roaring!!! It was such a crazy feeling like I was kicking and passing a lot of girls!! I saw Sammy to my left and I just told myself to keep pushing to finish right behind her!! Crossing the finish line going 1-2 for the first time in the U20 800m was an incredible feeling!! We've been talking about this the whole trip, and to finally make it happen was amazing!! I just ran up and hugged Sammy because I was so happy!! Once I sorta caught my breath, I grabbed the USA flag and just started to pose and smile with it!! It's crazy how crazy the media people are, they were pushing and pulling us to go everywhere!! It was such a surreal feeling, and it's definitely going to be a day that I'm never going to forget!
Just knowing that all of the hard work I've put in this season finally pays off is such a relief! This has probably been one of my longest seasons and I'm so happy to end my high school career on a high note! After, Sammy and I did a bunch of interviews and then we changed into our medal stand jackets!!!! I was so hype, especially knowing that the mens hurdlers went 1 & 2 right after us!!!! Then Candace Hill winning the 100! That was 5 medals in like 20 minutes!! Going up to the podium I just couldn't stop smiling, like I was just so excited!!! Then receiving my medal and listening to our national anthem was such a special moment. I'm just so so glad that I had the opportunity to represent the United States on such a high level.
Coming back to the hotel I was just still hype over the race!!! Everyone was telling me good job and I was just excited about literally everything! I was so hype I didn't even go to sleep until 5am, and I'm definitely paying for that now!! I just want to thank everyone who has been supporting me the entire way, it means so much to have such a strong support system! Thank you guys so much, it's been an honor to race with USA on my chest!!

Keep up with the results, news, interviews, and all World Junior Champs Coverage