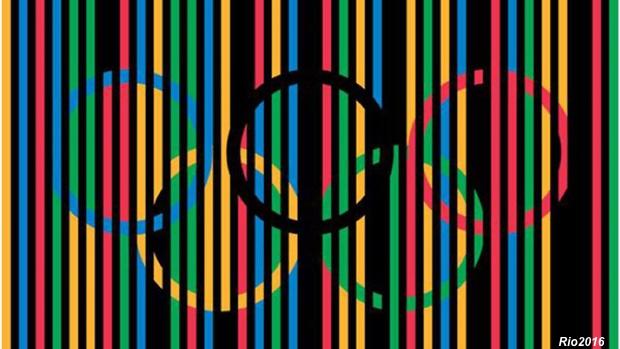 Scroll through the slideshow to see all 13 Olympic flags.

Most Olympics Use One Poster; Rio Goes With Collection of 13

RIO DE JANEIRO (AP) - Most Olympics have only one official poster. The Rio de Janeiro Games will have 13, a collection meant to showcase the diversity of Latin America's largest country.

The collection, composed by 12 Brazilian artists and a Colombian, went on display on Tuesday at the Museum of Tomorrow, the modernist ship-like building designed by Spanish architect Santiago Calatrava and set in Rio's renovated port area.

Carla Camurati, director of culture for the Rio Olympics, said the posters were meant to highlight the variations in a country of 200 million that is made up former African slaves, native peoples, Europeans from Portugal and across Europe, Japanese - and mixtures of many more.

The posters - mostly in hues of bright yellow, green, red and blue - focus on some of Rio's classic images: a muscled runner on Copacabana Beach, a dark-skinned youth in a Rio favela - or slum - and motifs tied to fish, nature and the sea.

Others show off the Olympics images - the five rings and the torch. Several are pure abstractions playing with swirls of colors. One looks at the varied grids of sports fields, and another is merely white specks sprayed across a black background.

The Colombian artist is Olga Amaral. Brazilians include the street artist Kobra, the painter Juarez Machado and artist-architect Gringo Cardia.

Camurati said the posters will remain in the museum until July 22. They go then to Deodoro in northern Rio, the second-largest cluster of Olympic venues. After that, they'll find permanent homes in area schools.

"What we have here is a collection," Camurati said. "One for each taste. One for each person. One for each part of the country."
Scroll through the slideshow to see all 13 Olympic flags.
Tweets by milesplit