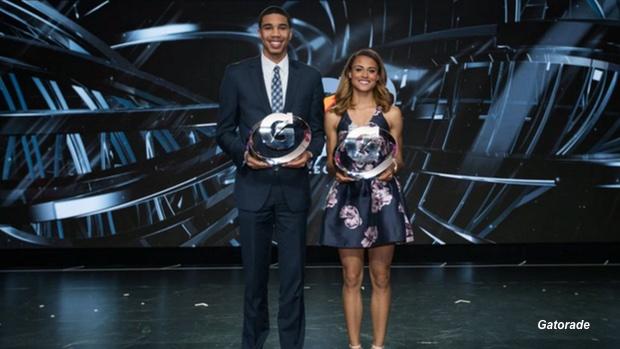 LOS ANGELES, Calif. (July 12, 2016) --  Sydney McLaughlin and Jayson Tatum were named the 2015-16 Gatorade Male and Female Athletes of the Year at a ceremony on Tuesday night at the L.A. Hotel.

The sixteen-year-old McLaughlin is the youngest Olympian since 1972, per her third-place finish in the 400m hurdles at the U.S. Olympic Trials last week. She is the national high school record holder in that event at 54.15, as well as the indoor 400m, at 51.84. But the journey hasn't always been easy.

"It's a huge honor. I didn't think I would make it here," McLaughlin said at the ceremony. "Two weeks into the track season I found out I had mono; that wasn't a great start to my season. Then my mom had a heart attack. They say every Olympian has two or three major struggles and I was having all of these struggles. Then I had a major panic attack on Sunday and I called my dad and my coach said just get on the line. I did that and I'm an Olympian. I want to thank Gatorade and my family and my coaches and everyone who got me here."

Tatum finished high school ranked No. 3 overall in the ESPN 100 of prep basketball players. The forward, who hails from Missouri and recently began summer school at Duke, averaged 29.5 points and 9.1 rebounds a game.