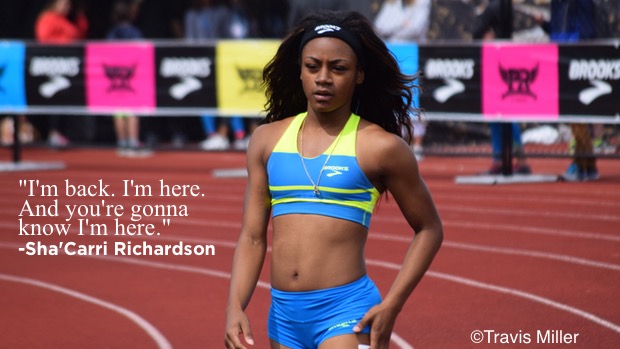 Sha'Carri Richardson was just another freshman in 2015, but now, she's becoming a household name. Being an underclassmen hasn't phased the Dallas Carter sophomore: "No matter how old I am, my age doesn't mean anything to me." Richardson's wild season really took off at Texas Relays. She qualified for the 100m final in a then-PR of 11.74, but was then disqualified for a false start in the final.

U.S. sophomore star-turned-Asics pro Candace Hill has been an inspiration for Richardson.

"She inspired me to run harder...If she can do it, I can do it," Richardson said.

After winning the 4A 100m Texas state title, she traveled to New Mexico to prove she could contend with the best in the nation outside of the smaller division athletes in Texas. At the Great Southwest Classic, she had a huge leg on the Texas 4x100m to help carry them to victory. She followed that up with a second-place, U.S. No. 2, 11.34 (+1.9) 100m showing.

She continued her hot streak with a second-place finish at Brooks PR. After revealing she had been dealing with injuries through the early stages of the season, Richardson came away from that performance with a lot of confidence:

Her message to track nation is simple:

"Look out, because I'm coming. I'm not done racing until I get where I want to be. Rest assured, you will hear more about Sha'Carri Richardson."

Make sure you dial into the AAU Region 18 live stream on MileSplit Saturday and Sunday to watch Sha'Carri Richardson compete in the 100m and 200m. Every time she hits the track, she has the potential to run her way to a nation-leading time.