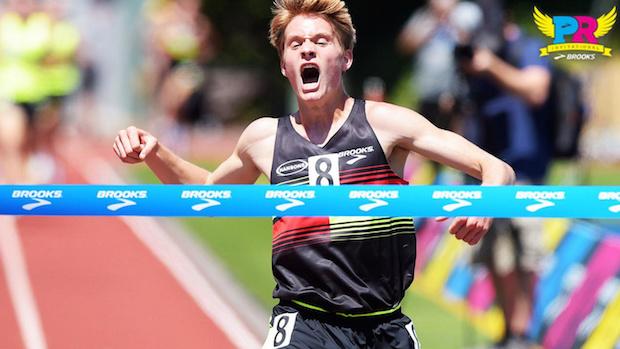 The Brooks PR Invite is kicking off on Saturday--let's take a look at some of the stellar performances that have solidified this meet as THE place to run fast.

Although the event is now an outdoor meet held in Seattle, it began as an indoor competition in 2011 at the University of Washington's Dempsey Indoor facility--one of the fastest indoor tracks in the country.

In the inaugural girls two-mile race, Wesley Frazier blazed down the last 100m to run a new U.S. prep record time of 10:17.47 for the win.

The following year, several national high school records were set again at the Dempsey, including Donovan Robertson's blistering 7.57 in the boys 60m hurdles.

Equally impressive that year was the boys mile, where champ Marcus Dickson--who entered with the slowest seed time--edged out Jacob Burcham. He finished with a time of 4.07.18, a narrow 0.02-second victory over Burcham!

The trend continued in 2013 with a Kick of the Week-worthy finish from the year's No. 1 prep miler Bernie Montoya who competed in the boys two mile race. Montoya took the crown in a new Brooks PR record of 8:54.63!


And who could forget this?

At the new host track, Renton Memorial Stadium, the 2014 Brooks PR Invite put together more insane fields. This time, the nation's top recruits were pinned head-to-head on an outdoor track. Fresh off his win at the adidas Dream Mile, Grant Fisher was "Centro-smooth" in his quest for the boys two-mile title. With 200m to go, Fisher BROUGHT OUT THE BLADES to run 8:51.28 for a serious victory.


Thrilling performances continued at Brooks PR's first outdoor meet with soon-to-be-pro Alexa Efraimson dominating the field with a 2:03.26 in the girls 800m.

Finally, just last year we witnessed one the greatest prep battles in history. In a highly anticipated race featuring reigning champion Grant Fisher, Drew Hunter was crowned the Brooks PR two-mile champion after an epic duel over the final 200m.


But Candace Hill in the girls 100m was the race of the meet. Running a time that would have ranked the 16-year-old as No. 8 all-time in the NCAA, Hill soared past the rest of the field by setting an American junior record, world youth record and national high school record of 10.98 that still stands.

It's impossible to predict how fast the times could be Saturday for these high school runners in search of ultimate bragging rights, but we do know one thing: They will be  fast. There is serious hype in the girls 800m with talent like Christina Aragon and Sammy Watson spiking up. With U.S. No. 2-ranked 800m runner Michael Slagowski pulling out due to injury, the fight for the boys 800m title is bound to be extremely competitive. Also exciting will be the addition of an elite division featuring a men's and women's 1500m run, women's 800m, and men's 600m.

The 2016 Brooks PR Invitational starts at 1:30 p.m. PT on Saturday, June 18. Click here for the meet schedule and official list of entries. Tune into FloTrack for LIVE coverage of all of the races!
Tweets by milesplit