In the southern United States, football is king, and perhaps nowhere more so than the state of Texas.

The Southlake Carroll junior grew up in an athletics-crazed family of two sisters and four brothers, including two standout gridiron stars: Kris, one of the highest point scorers in University of Nebraska history and a 12-year veteran of the NFL, and Drew, who followed Kris' footsteps as a place-kicker for the Huskers and is on school record-setting pace for field goals and scoring as a rising junior.

"The motto of my family is, 'if you ain't first, you're last,'" Reed said.
Those athletic genes and do-or-die attitude have propelled the champion distance runner to his own success this year: he earned berths at both Foot Locker Nationals (16th) and Nike Cross Nationals (14th) this past fall, won the New Balance Nationals Indoor mile title and recently dropped huge PRs of 4:04.82 for 1600m and 8:50.43 for 3200m to place runner-up and first overall, respectively, at the Texas State Championship.
He will race the mile this weekend at the Brooks PR Invitational in Seattle versus the best four-lappers in the nation.

It's a good thing he hated football. 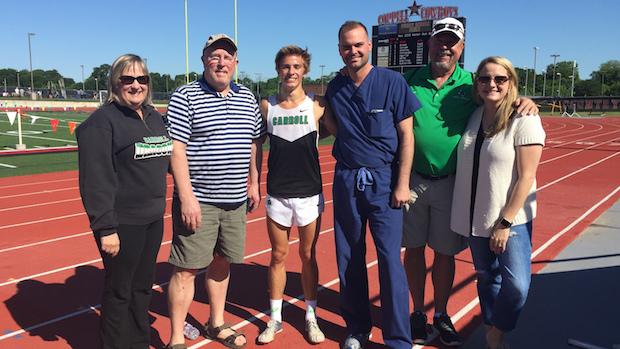 Reed (center) with some members of the Brown clan after a track meet. (Photo courtesy of Reed Brown)

"I was a lot smaller than the rest of my family, so I don't think football suited me very well," he said.

Reed, who measures out at 5-foot-8 and 125 pounds, tried to love the sport. As a youth athlete, he played wide receiver, safety and cornerback before developing a passion for baseball.

When Southlake Carroll head coach Justin Leonard met Brown, the scrawny ninth-grader was a two-sport spring athlete who clocked a 4:30 1600m PR while splitting his workout time between the track and baseball teams.

"At that time, I knew we had something special," said the 12-year veteran coach, whose girls and boys cross country teams have combined for 10 Texas state titles. "I think sometimes kids are born with it, the ability to compete and the ability to expect yourself to be up in the group. When the race is on, he's gonna be in the middle of it. He's always had that."

Reed's brother Kris, who was the sole placekicker for the Houston Texans in the first eight years of franchise history, isn't sure where the distance running gene came from.

"Every time they come visit, my dad tries to get me to go run with him and I'm like, 'I'd have to shock my heart with paddles,'" Kris says. "He runs two miles in what I could barely run a mile in."

Watch the post-race interview with Reed Brown after he dropped a 10-second PR in the 3200m to run 8:50.43 and win the Texas state title:

Brown was hoping to race sub-four miler Michael Slagowski at Brooks PR, though the Penn State recruit was slotted for the 800m before scratching the meet due to injury. Even without Slagowski, the field features 11 sub-4:10 runners, including fellow junior Sam Worley, who edged Reed for the 1600m Texas state title in 4:04.59.

Leonard and Reed have discussed the potential for a sub-four.

"It seems more attainable than it used to be," Reed says. "When Slagowski broke it, that gave me more hope because he kind of came out of nowhere. He wasn't on the radar as much as Drew [Hunter]."

Could a third boy add his name to the list of sub-four high school milers in 2016? Tune in to the free webcast on FloTrack this Saturday at 3:35 p.m. PT to find out.

Favorite Movie: Land of the Lost
Favorite Song: "3005" by Childish Gambino
If you could go on a run with anyone, who would it be? Evan Jager because he has the coolest hair
Random Fact: I worship my hair a little. I use gel, but it takes me awhile to get it to work. I use bedhead. Throughout my childhood, I usually had buzzes but every once in awhile I'd grow it out. In ninth grade, I gelled it and kept it from there.