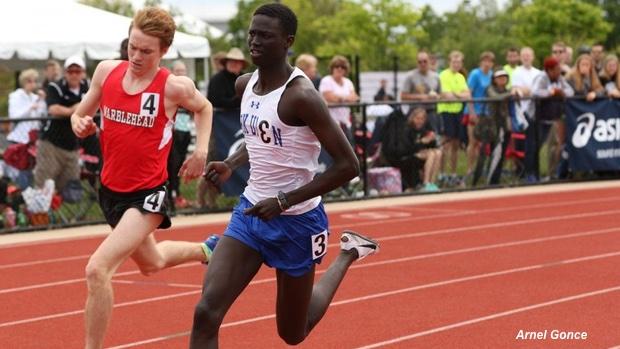 Alex Lomong of Fork Union, Va. committed to Ohio State in a signing ceremony at his school on Wednesday, June 8.

The 13-time Virginia state champion is the younger brother of Peter Lomong, a freshman at Northern Arizona University, and two-time U.S. Olympian Lopez Lomong. The eldest Lomong worked with Brice Allen, the current OSU distance coach, when he was a collegiate runner at NAU, where he earned two NCAA titles in 2007: indoor 3K and outdoor 1500m.

The youngest Lomong saw his recruiting prospects multiply after running a personal best of 1:48.67 for 800m in the epic Dogwood Classic race vs. Brandon McGorty and Drew Hunter. Though the race was in early May, the trio's times still rank No. 2, No. 3 and No. 4 in the nation this year.

"It's been crazy since I ran the time," Lomong told Bart Isley for Scrimmage Play.