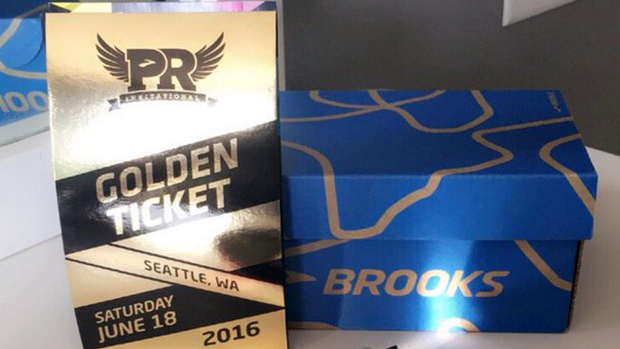 AUSTIN, Texas (May 9, 2016) -- The Flo Golden South Invitational is officially an automatic qualifier for the Brooks PR Invitational in Seattle, Wash. on June 18. The event will be held on Saturday, May 28 at the National Training Center in Clermont, Florida, just outside of Orlando.

The boys and girls winners of the Classic Division 100m, 400m, 800m and Mile will receive a golden ticket and advance to the Brooks PR Invitational.

"Brooks is excited to bring Run Happy to the Golden South Meet with FloTrack and offer golden tickets to the some of the Southeast's fastest runners," said Steve DeKoker, Brooks Running team brand manager. "We're committed to the sport of track and field and look forward to seeing the track light up at this year's Brooks PR Invite fun, fast races."

The new partnership between Flo Golden South and Brooks PR makes the stakes even higher for what is annually one of the most thrilling and competitive track meets in the southeast region of the United States. With a golden ticket on the line, everyone has a chance to qualify for Brooks PR, an all-expenses-paid post-season championship in Seattle.

Flo Golden South will celebrate its 40th year this summer and its first under the organization of FloSports. In true Flo fashion, the track meet will be an epic event to attract new fans to the sport. Expect an experience: food trucks, dance contests, infield DJs, games and free Brooks schwag giveaways throughout the day.

"FloTrack and MileSplit have been a part of Brooks PR since its inception and we are thrilled to make Golden South a qualifier for Brooks PR," FloSports co-founder Mark Floreani said.

Floreani added, "Flo's mission is to grow the sport. Along with adding fun and flash to the event, we could not think of a better way to do so than giving kids a chance to earn a trip to Seattle to compete on a national stage against the country's fastest at Brooks PR."

Other event sponsors include CEP, TrackShack, Pure Athletics and the National Training Center.

Can't get to Florida? Track fans can watch the action from anywhere in the country as both Flo Golden South and Brooks PR will be streamed live on FloTrack.