Race of the Day 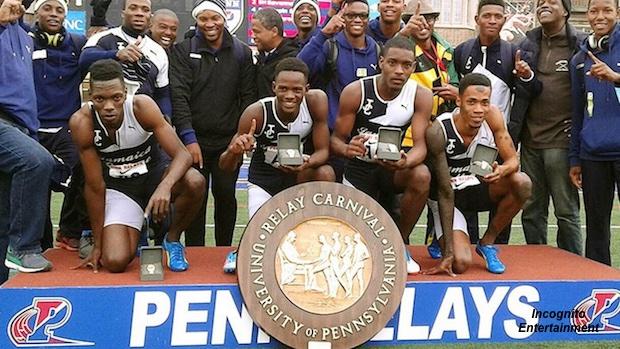 The High School Boys 4x400m Championship of America featured five Jamaican teams, one Trinidadian team and two American squads hopeful to keep the wheel in the States for the first time since 2007.
Calabar and Kingston College entered as the 1-2 finishers from Jamaica's ISSA Boys & Girls Champs, where they ran 3:09 and 3:10. But Kingston's star anchor, Jamaican national junior record holder Akeem Bloomfield, did not appear in the school's signature purple kit for the finals after winning the 4x100m Championship of America earlier in the day.
Would the 44-second quarter miler's absence guarantee a Calabar win? Or perhaps leave the door open to T.C. Williams and the Lyles brothers, top Americans here last year but hungry for a wheel of their own?
St. Jago was first to hand off thanks to a 47.9 leg from Collin Sewell, but T.C. Williams' Noah Lyles catapulted from ninth to fourth to the front pack with an astounding 45.6 split! The Titan handed off tied for first with Jamaica College, St. Jago and Calabar.
And this is where the race was made: Jamaica College's Devaughn Baker powered away from the field with a 47.32 split to give a huge advantage to the black and white jersey at the final exchange.
The rest of the field simply did not have enough track to make up the gap.
As JC's anchor Phillip Lemonios ate up the track (48.2 final split), Calabar's Christopher Taylor, the Titans' Josephus Lyles and D.C.-based Archbishop Carroll's Maxwell Willis all ran under 47 seconds to make up spots two, three, and four.

Quote of the Day

I say this is special because this may not be the team we necessarily started with but we all have a real close bond. For all the seniors, this is our last time stepping foot on this track as this unit. And that's special because we love these guys, we're with 'em, we bleed, we sweat every day in practice with 'em. It's monumental for us.

Dance of the Day

St. Jago celebrate after bringing the 4x400m Championship of America title back home for the first time since 1990.