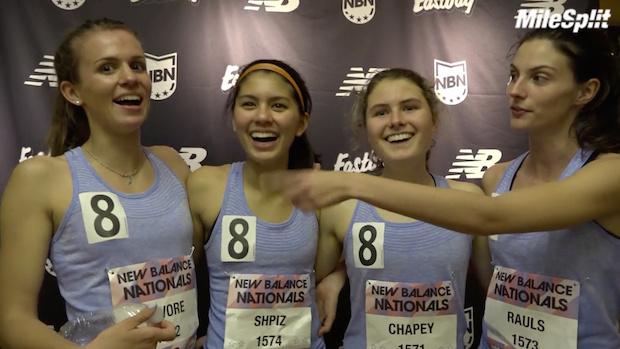 From left-right, Katie Devore, Lauren Shpiz, Lauren Chapey, and Shari Rauls won a national championship in the 4x800 on Saturday night at New Balance Nationals Indoor.  Mamaroneck's winning time of 8:58.86 is #7 all-time, but it's hard to imagine that there are six 4x8s that give better interviews. We transcribed the whole thing to save you time; if you want to watch the eight minute video, it's at the bottom of this post.

MileSplit: Take me through it leg by leg.

Shari Rauls (leadoff): I was running pretty conservative the whole time because I wasn't sure what I'd be able to finish with. I was scared I'd fall over. I stayed at home from school Monday through Wednesday with a fever. I was able to walk around for like, thirty minutes without having to lie down yesterday.

You made a comment about how Drew Hunter was sick and broke 4:00 in the mile.

Lauren Chapey (third leg): I was like, Miss Pep Talk all week. "You look fine, we just have to be confident." At states she had a leg of like 2:15 and thought she was jogging. Someone like her, I wasn't as actually concerned as I probably should have been. I knew that tons of people have these weird incidents and still come out on top.

Rauls: Last year at nationals I ran 2:10 and never made it close to that again. So I was hoping for anything under 2:20 today, and I had a kick.

You see these other New York teams all the time, Shen and North Rockland were both out there. Who were you most worried about?

Chapey: I don't know if Shen was on our radar as much because they didn't make it to states. But that's only because they had such a competitive section, so I guess we overlooked them. There were a few [teams] we saw, I think Naperville North--no--there was some team that ran 9:10...

Chapey: Yeah. If they could do that alone, I wonder what they could do with competition. But we were confident in ourselves, being US #1 and even with our 9:01, none of us had run a major PR. Well, one of us had, but no one was crazy fast besides her. So we knew we had some wiggle room with that PR.

What was the major PR?

Lauren Shpiz (second leg): At the Armory Track Invitational, I ran 2:14, which was a six second PR. That was crazy.

Was this the season where you guys were kind of just firing on all cylinders at the same time?

Devore: Shari, Chapey and I--we're all seniors, and we've been running together since eighth grade. And [Lauren Shpiz] is our little track baby that joined us last year. So we're basking in every moment we have together, every race we have together. After every race, there's one race left--one race less left, I can't speak English, but you know what I mean, it's sad.

Chapey: We're all gelling really well. Like, we've had injuries this season and cross-trained through them, but in the past we've had detrimental injuries where one of us couldn't compete. But this year we're all in gear together. We know each other so well, it's just a great bond--

Rauls: (Points at Devore) Two of us go to PT together.

Katie, you tripped on a rock or something?

Devore: I fell on a rock, because I'm a spaz, and I sprained my ankle and got a bone bruise on my knee. It was bad, I cried like I was four and my mom took something away from me.

So this was Thursday?

Devore: This was this Thursday, as in March 10th, approximately 3:45 PM.

What have you done since then?

Devore: Coincidentally, my orthopedist was on scene. He loves to run and was doing a workout on the track.

Chapey: Oh, this was so weird.

Chapey: I sprinted to a friend's house, she drove us to the track, and the trainer took a look at her. Then her orthopedist runs by and is like, "Katie, are you ok?" So that was weird.

Devore: So I was done for the day after running and I was like sixteen minutes into my run. And then I skipped school the next day because obviously, now, I had an excuse. I went to my doctor and he told me that I should be good to run, but I could get a cortisone shot if I wanted. I opted out of that and went to practice later with my knee and ankle wrapped. I was able to run, the only thing it got in the way of was my run on Thursday.

Did you feel it during the race at all?

Devore: Honestly, while Lauren was on the track during the third leg, I looked down at my knee and was like, "Why do you hurt so much right now?"

But I think a lot of runners can related to the fact that while they're racing, they can't even hear. I just zone out. I couldn't even feel my body, it was just like I was floating.

When North Rockland was so close to you guys-after they set a national record in the DMR last night-- was there any fear?

Devore: When I got the baton behind Alex Harris--she and I have raced each other a fair amount this season, and I know she's such a powerhouse. She and her whole team, they set the national record in the DMR, 11:34 last night. So I know they were a force to be reckoned with.

I was intimidated, because I know she's so good and has a strong kick. But I pulled something out of me that I didn't know that I had, and went after her.

Chapey: We're in the same section, so we see them a lot.

Probably the most competitive in the country, after this race.

Devore: It sounds obnoxious to say, but it definitely feels like it. For state qualifiers we were almost more nervous, because we had to go up against North Rockland and Blonxville.

We can't finish this without asking about the finish line celebration. That's the first dab I've seen at New Balance. 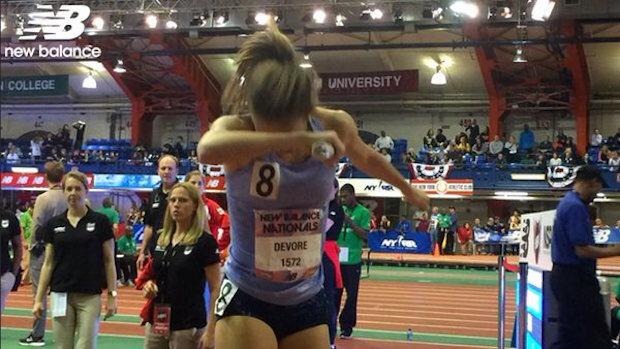 Devore: Shari's boyfriend came to watch, and was jokingly like, if you win nationals, you better dab at the end.

Devore: Oh no, I'm a terrible dancer. It was probably really bad, I probably managed to mess it up somehow.

Chapey: She's a team dancer though, she's got some moves.

Devore: I dance when I'm nervous. Which is a lot. Last night, we were driving back and it's called "Best Friend." I don't know who it's by, but I liked it on my Soundcloud. It's really hip-hop-y.

Is it a new song? I'm just wondering how I could look it up.

Devore: It's kind of explicit.

[Ed. note: We believe that the song is "Best Friend" by Young Thug, which is so explicit that there's not a version we can link to.]

It's just so not our speed, but our speed at the same time.