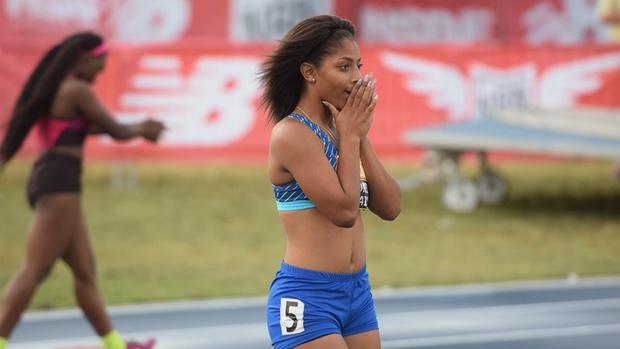 Eighth-grader Tia Jones was the youngest New Balance Nationals champion last June when she won the 100-meter hurdle Finals in 13.08. The Georgia sprinter is a top contender for the World Youth Championships in 2017. Mike Kennedy of Track & Field News reports on top prospects for the biannual event.

All Marks Through Feb 1.

In 2015, the United States won its eighth straight IAAF World Youth Championships team title in Cali, Colombia. In contrast to 2013, when the U.S. totaled a 152 points (scoring the top eight finishers) but won just two gold medals and 17 overall), the Americans upped its totaled to 163 points, eight gold medals and 19 medals overall. The eight gold medals and 19 gold-silver-bronze total are also all-time World Youth Championship bests. Since 2009 the U.S. teams have been about 40 strong and made up  almost exclusively of athletes that had shown, by performance, the ability to make a WYC final. The limit of about 40 has resulted in a number of athletes who had demonstrated that ability to make a final not being selected.

This year the USATF Youth selection body took 40 athletes who met that standard but also added eight additional athletes who, although not achieving that standard, were very close. Most of the additional athletes performed very well including Phillip Rocha of Arcadia (Ca.), who finished ninth in the 1,500 final.  Liam Christiansen of Academic Magnet (North Charleston, S.C.), a javelin thrower from a school with no track or track team, entered the U.S. trails with a best of 194-10 with the 800 gram javelin and won with a 224-2  with the Youth 700 gram javelin. That mark was equivalent to 238-4 which would likely make a WYC final. At the WYC qualifying Christensen improved to a U.S. Youth record of  238-2 to just miss making the final by l8 inches. The standard of making the WYC final has been an excellent guide in selecting a team but it's great to see that the Youth committee was willing to extend invitations to additional athletes.

The performances of the 2013 and especially the 2015 U.S. teams at future WYC will be very tough to match given the fact the rest of the world is now fully committed to sending athletes to the WYC. With nineteen months-almost two full seasons, before the championships in Nairobi, Kenya, identifying prospects for the U.S. team is difficult, especially for the boys, who show so much improvement when they turn 16 and 17. Also keep in mind that birthdates for many athletes are not always available and there for not always known. A list of U.S. prospects for both boys and girls can be accompanying this file.

Last year Sean Lee of Trabuco Hills (Mission Viejo, Ca.) finished second in the state meet with personal best 6-9. This January the 6-5 ½ sophomore opened up with a 6-10 clearance in an all-comers meet for the best jump in the world for Youth athletes born in 2000-01. K.S. Anandhu of India ranks No. 2 at 6-9 ½. Kyle Garland of Germantown Academy, Ft. Washington, Pa.) is second nationally at 6-6 indoors. In the pole vault,  Colton Crum of Frankfort (In.) cleared 16-7 in a state regional meet before finishing second at state clearing 16-3. His best also is a world Youth leader. No other vaulter has cleared 16-0 ¾. The second best U.S. vaulter is freshman Max Manson of Monarch (Louisville, Co.), who cleared 14-1 ½ in a 2016 indoor meet at Air Force Academy in Colorado Springs. Max is the son of Pat Manson who set a national high school indoor record of 17-6 ½ in 1986 and had a career best of 19-0 ¾ indoors and 19-2 ½ outdoors. There are three other U.S. vaulters over 14-0.

James Brown of Drew (Riverdale, Ga.) is the U.S. leader in the long jump with his winning 23-4 at the AAU National Junior Olympic championship 15-16 division. Seneca Milledge of Fort. Myers Academy (Fort Myers, Fl.) has jumped 22-1 ½ with legal wind and 22-7 ½ where no wind reading were available. However, he has a best of 10.76 in the 100 at the state middle school championship. The world Youth leader is Jarod Biya of Switzerland at 24-0 ½.  Maurice Robinson of Murphy (Mobile, Al.) is the U.S. triple jump leader at 43-10 ½ indoors. Emmanuel Oyetunde of Franklin (El Paso, Tx.) has jumped 47-0 ¼ and Robinson has a best of 44-6 but no wind readings were taken. Maykel Vidal of Cuba is the world Youth leader at 50-9 ½. Joshua Sobota of Bearden (Knoxville, Tn.) is the U.S. shot put leader at 51-6 ½  with the 12-lb. shot. Arttu Koskeasolo of Finland  is the world Youth leader at 64-1 ½ with the 5-kilo (11-lb).shot. Generally there is about a three-foot difference between the two implements.

Last year Tia Jones was an eighth grader at Dickerson middle school in Marietta (Ga.). Facing stacked 100-meter hurdle field running over 33-inch hurdles at the New Balance nationals in Greensboro (N.C.), she would be meeting many of the best high school hurdlers in the nation. No Problem. Jones qualified for the final finishing second in her heat to Tonea Marshall of Seguin (Arlington, Tx.), 13.53 to 13.64 with legal wind. In the final, it was again  Jones vs. Marshall but this time Jones prevailed 13.08 to 13.12. The race was wind-aided at 2.5 meter per second breeze but it made Jones the eighth fastest high schooler of all-time under all conditions, despite her not being technically in high school. She remained undefeated in finals in the summer and finished the season with a legal best of 13.45 in winning the USATF National Junior Olympic (14-15) title. On the high school year-end wind legal list six of the top eight high school runners in the nation had run in the New Balance final. Finishing fifth in that race was Alexis Duncan of DeSoto (Tx.), who would later that summer run 12.95 at the World Youth championships for the second fastest Youth time ever run over the 30-inch hurdles.

Jones was not at the World Youth championships because.............she was too young. For the year, Jones ranked as fastest Youth athlete running over the high school  hurdles with her 13.45. She was followed by  Jada Hicks of Upland (Ca.) and Maria Vincente of Spain, both at 14.05. The fastest times for  Youth division athletes was 13.50 by Daszay Freeman of Jamaica. Jones best time for the Youth hurdles came in 2014 when she ran 13.40-a time that would have placed her fifth at the  last years World Youth championships.  Earlier in her career in 2013, Jones demonstrated her flat speed when she ran 23.81 for 200 meters at the USATF National JO (13-14) division, as a sixth grader. In the 400 hurdles, Sydni Townsend of Neumann-Goretti (Philadelphia, Pa.) and Masai Russell of The Bullis School, Potomac, Md.) were two-three in the AAU National JO (15-16), running 60.99 and 61.00 for the second and third fastest Youth in the world behind Sanique Walker of Jamaica, who had a best of 59.04. Walker has a best of 53.59 in the flat 400. Kennedy Simon of  Westlake (Atlanta, Ga.) is the U.S. Youth leader over in the  300 hurdles in finishing second at state 6A meet at 42.85. She also has a best of  53.27 in the flat 400. Frida Hamalainen of Finland is the world leader at 42.85 in winning the national under-15 championships.

Daloria Boone, the world Youth leader at 100 meters, is also second in the long jump with a winning 20-4 at the Taco Bell Invitational, followed by Lanae Tave-Thomas of Rush-Henrietta (Henrietta, N.Y.) with 20-0 effort in winning the Jackson-Walker indoor meet in January and Kynnedy Flannel at 19-9 ½.. The world Youth leader is Holly Mills of Great Britain at 20-7 ¾. Sanaa Barnes of Bryon Nelson (Trophy Club, Tx.) is the U.S. Youth high jump leader at 5-9 with state regional win and Marisa Gwimmer of Galion (Oh.) is second at 5-8 ½. Valentina Ulyanova of Russia is the world leader at 5-11 ½. Barnes best ranks No. 7 among world Youth. Freshman Mackenzie Hayward of Marcus (Flower Mound, Tx.) is the U.S. Youth pole vault leader with a 12-9 vault in January and ranks sixth in the world behind Aksana Gataullina of Russia, who has cleared 13-5 ¼ this winter. In the triple jump, the U.S. leaders are freshman Jasmine Moore of Grand Prairie (Tx.), who won the USATF National JO (13-14) division at 40-1 ½ . Sophomore Saudia James-Heard of Curtis (University Place, Wa.) is second at 39-11 ¾ and has a wind-aided 40-3 ¼. The world leader is Sonya Kussekala of Ukraine, who finished second in the European Youth Olympic festival with a wind-aided 43-7 ¾ and a legal best of 42-6 ½.