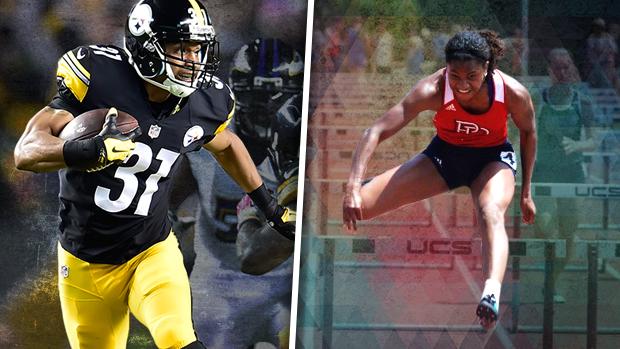 When 18-year-old Anna Cockrell toes the line this weekend for the 60-meter hurdles at the Camel City Elite Invite, she will share the track with a rock star line-up of Olympians and World Championships medalists.

But the senior at Providence Day School in North Carolina isn't intimidated by professional athletes. Her older brother, Ross, just landed a contract extension as a cornerback for the Pittsburgh Steelers.

Anna's never been scared of Ross.

Who is Anna Cockrell?

Anna Cockrell is the reigning Pan-American Junior Athletics Champion for the 400-meter hurdles.

She accomplished the feat in Canada last summer, the tail end of a whirlwind outdoor season that saw her run 56.67 to become the fifth-fastest high schooler in history. That time would win many state championship titles in the flat 400m. She has met the USATF Olympic Trials standard in the event and is just milliseconds off the time required to run in the Olympic Games.

"She's so young in both hurdles [events]," Providence Day School Coach Carol Lawrence says. "There's not really one 'best one' yet, because this is really five years of working on properly hurdling. It takes time to develop -- at 26, 27 years old, they're not peaking yet. She hasn't reached anywhere close to her potential yet."

But maybe she came a step closer in Canada -- Edmonton, to be exact -- to at least realizing what that potential could be.

"I think I've grown a lot, having to adjust to a different place, time zone, different food," she says. "The moment that stands out the most to me was the first or second day in Canada.

Cockrell's self-reliance is the end product of years of guidance and training.

Lawrence remembers one of the pair's first years at New Balance Nationals in neighboring Greensboro, N.C. -- either Anna's freshman or sophomore year.

"It was one of those nerve-wracking times," Lawrence says. "I said, 'I have to say something here,' and I just turned on Beyoncé. Beyoncé is her alter ego."

And "Get Me Bodied" is her favorite song.

Whichever year it was, the tactic worked -- Cockrell made her first national final as a freshman and earned her first All-American honor as a sophomore. 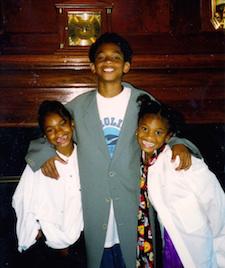 There are three Cockrell siblings: Ross, Ciera, Anna; three little bundles of energy that could only have sprung from a gene pool of athletes.

Dad, Keith, was a football star at Columbia University, and Mom, Serena, was a prep gymnast and track athlete ("not even close to the level that my kids are at"), but they don't take sides in the sibling turf wars.

Ross, the oldest, was short and scrawny -- but told anyone who would listen that he will play in the NFL one day.

Mom says the lot of them weren't much more than a mix of knees and elbows -- "the skinniest, scrawniest kids on the face of the Earth; it looked like you could break them in half."

Ross is six years older than Ciera, who is one year older than Anna. The girls are inseparable; automatic teammates. Ciera and Anna vs. Ross: basketball, football, who can get the ball in the window sill.

When the girls lost -- which, inevitably, they did to the brother five years their senior -- Ciera didn't care.

"We were always tacked to lose," Ciera remembers. "He was five years older than me, six years older than Anna, but she would never take losses easily against Ross. If we lost, she would go and attack Ross. 'You cheated, this isn't fair!' She'd be scratching on him, biting on him.

"I take my losses. He's got strength on me, height on me, weight on me. 'We'll take him next time,' I'd say and go inside. But that wasn't Anna's MO."

'It Was Historic That Night'

"Ross had a football in his hand as soon as he could hold anything," Serena says.

But the girls took longer to find their respective specialties (track for Anna, volleyball for Ciera) and dabbled in a little bit of everything, including gymnastics and basketball… where Coach Dad took the reins. For a year or so, at least.

The patriarch, Keith, and all three children bound through the door in various states of distress that -- years later -- Serena recalls with hilarity.

"Anna - she has the stronger personality - she is the first one coming home and she's like, 'I don't know why he even tries to coach us! He can't tell us what to do!"

Ciera was in tears.

Ross tried to reason -- "He can't coach them like he coached me, they're girls. You can't make them do suicide drills because they're on the side talking!"

"Everyone is upset, everyone is showing their own personality," Serena says now, "and at that point, I just made the decision that we were no longer going to play basketball."

"They stink!" Serena said. "They both play horribly, it's causing conflict in the family."

"And so that's what caused the track and volleyball careers. It was historic that night."

* NCRunners interviews Anna this past December after she won and set lifetime bests in the 55m, 55mH and 300m at the NCRunners Holiday Invitational.

When Lawrence, a Jamaican-born NCAA DII All-American, first met Anna, the now nearly six-foot-tall Amazon was a five-foot-one seventh-grader on an open house visit to PDS with her family.

Mama Cockrell introduced herself and her daughter to the potential new track coach.

"This is Anna, she's a fantastic hurdler!" Lawrence remembers.

"I looked at her and said, 'mmhm,'" Lawrence said. "As soon as I left, I looked her up on YouTube and said, 'I have this and this to fix,' so when she came as a ninth-grader, I knew what to work on with her.

Anna was just the sponge that Lawrence needed to reinvigorate the track team at PDS. The former Wall Street analyst switched careers in order to guide her daughter's running: Arielle Massillon, now at Villanova, led the Chargers to the first track and field state title in school history. But most of her athletes were not interested in competing at the next level.

"I had kids who just wanted to do sports for fun but didn't have any serious athletes," she says. "At that point, I was tired of wanting it more for them than they wanted for themselves."

The indifference was a far cry from Lawrence's own experience with track and field.

She says the difference between Jamaican and American athletes is Jamaicans' rural upbringing. They "train with more of a hunger."

"Then along came Anna." 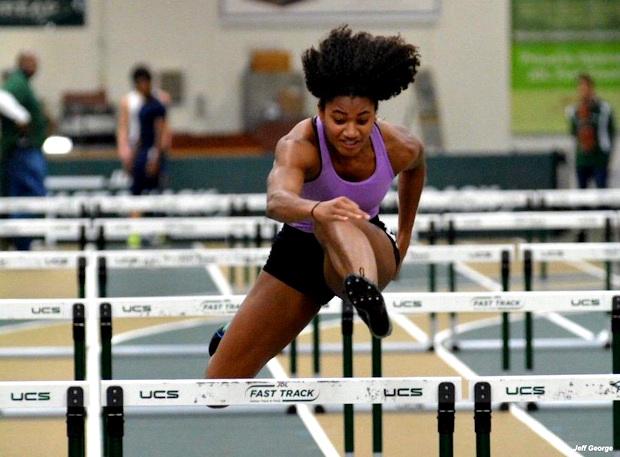 Hurdlers are crazy -- at least a little bit, and a little bit more than other track athletes -- and that's one thing nearly everyone can agree on.

"No part of your body says run at full speed at a stationary object," Anna says. "You have to be insane to be a hurdler and I think you just have to be aware. We probably have the most body awareness of anybody on the track. Hurdling takes a lot of thought."

Or a completely different mindset, according to Coach Lawrence. At least, to be an elite hurdler.

"You have to be real crazy people," Lawrence says. "They don't care who happens to be lining up against them on the track."

Ross was a track star himself as a prep - he swept the 100m, 200m and 400m at the NCISSA State Championships his senior year. But he tried hurdles just once - in sixth grade - and vowed 'never again.'

"It takes a more precise technique than any other running event on the track," Ross says. "That plays right into what Anna's strong at.

"She's one of the most talented individuals I've been around in my entire life. She has a strong will and a strong mind. She's just not gonna be denied and I've given her a lot of credit for that." 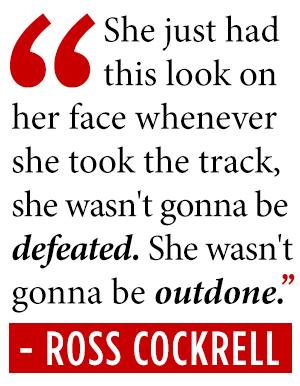 Even... against him. The 18-year-old has a standing challenge against her 24-year-old, NFL-contracted brother in the 100-yard dash.

Ross says the only chance she has to beat him is if they post hurdles in the lanes.

But jokes aside, Ross's success and subsequent encouragement is perhaps the crux of the whole thing that not only motivates the girls to achieve - but proves that with a little bit of work, their highest goals are attainable.

"Ross... the fact that he made it this far, has been the one all along telling [the girls] they could make it to the next level," Serena says. "He all along has been the one to say, 'you guys have more natural talent that I have, and if I made it, there's no question you can make it.' So there's not even a question she can make the Olympics if he made it to the NFL."

Anna is reticent to talk about the Olympics. She could, conceivably, race in the Trials this summer in Eugene.

She has the Trials standard in the 400m hurdles and isn't far from the Olympic standard, though she says her immediate goal is to represent Team USA at World Juniors.

"[Ross] definitely makes competing at the national level look really attainable because I've seen his whole process; he was undersized, he wasn't highly recruited out of high school.

"I've watched his journey and seen how it's applicable to me. If I follow in his footsteps and take notes from his example, I can achieve the same amount of success." 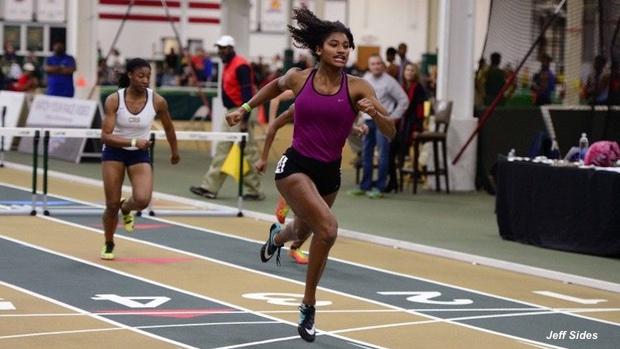