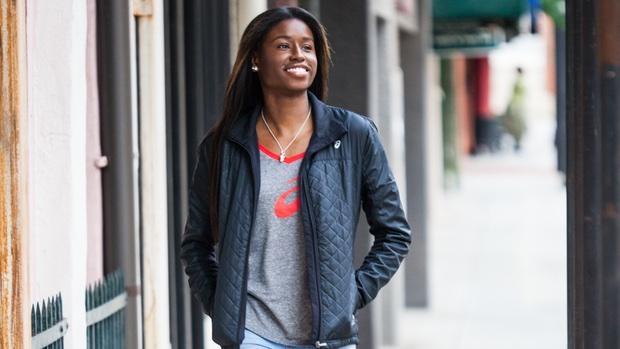 Candace Hill talked to Jojo of MileSplit one day after signing on with ASICS as the brand's first female sprinter. The sixteen-year-old high school junior at Rockdale County High School in Conyers, Ga. is the youngest track and field athlete to sign a professional contract. She dishes about her decision to go pro, her training schedule and what her favorite ASICS gear is...

Jojo: Congratulations on signing with ASICS! Can you describe the timeline and process of turning pro?

Candace: Initially, I was not thinking about going pro; I just thought that I'd continue my junior and high school years and go to college and go pro in college. However, my mom came to me and said, 'Candace, people have been asking you to turn pro and I feel like it's your next step in life because... high school's getting too easy for you, it'll prepare you for the next thing.' 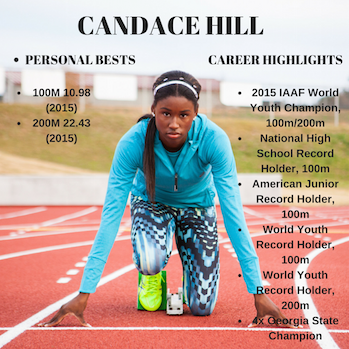 I was like, 'no, I don't want to. I want to finish high school, finish college.' Because if you look at some of the people who turned pro in the past, I didn't think that was a good idea for me because I didn't think I was that fast and I'd be able to handle the pro competition. And my mom and coaches said to me, 'this is the next step...'

How long did it take for you to change your mind?

Was there a particular moment that changed your mind?

After many times, my coach said, 'okay, Candace, you need to go pro. I think it's best for you, you've already made it to the highest level in high school and what's left for you? They're not gonna push you like professional track athletes would.'

What are your expectations for 2016?

I'm looking at 2016 for a learning experience. I'm definitely gonna go to the Trials, but only as an experience and if I make the team, I do, and if I don't, I'm not gonna beat myself up about it. I'm not gonna go in saying I'm gonna do something and then if I don't... then people will be like, 'what happened?' 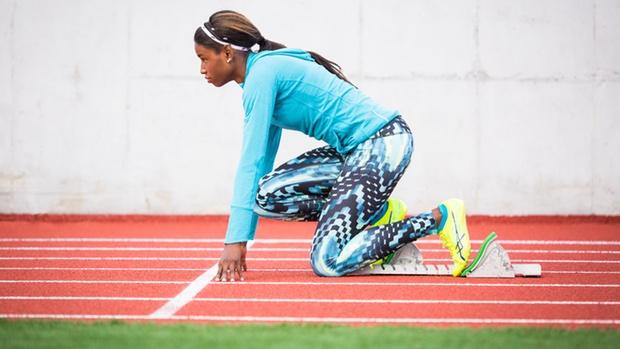 What events do you plan on focusing on this year?

I don't really know what my coaches have decided, they have 100m and 200m throughout out my race schedule. But we're talking about it right now.

What is your coaching situation? The NYT reported that you switched coaches to Tony Carpenter recently.

Actually, I didn't switch coaches, I just added another coach. I'm working with Tony Carpenter... he's the head of the Titan Elite, they're out of college and they're running in the meets too and he puts them with me. [The training group is] about a good seven people. I do run with the guys because sometimes the girls are doing a different workout than me. I'll run with the guy sprinters... some of them are [post-collegiate] and a few of them are in high school.

[On] Tuesday, Wednesday I practice with Coach Sayon Cooper. He trained me in 10th grade and in 9th grade throughout the summer time, along with my high school coach Vinson Elder, but he's not training me now - not until the spring.

With Cooper, [there's] one person training with me; she's post-collegiate.

Monday and Thursday, I'm lifting weights and that's basically at the gym, working out at the gym.

Saturdays and Sundays, I work with Coach Carpenter at Piedmont Park in Atlanta.

I'm off on Fridays.

They [ASICS] just wanted to keep it as normal as possible. They didn't want to make any changes -- "she works best with these coaches."

Who's the harder coach?

I would have to say Coach Carpenter. We warm up a lot... I'm not used to doing a full warmup routine, he works on like, different parts of your body. We'll go through one hour, 40 minutes of warmup. It's probably shorter, but that's what it feels like.

I'd have to say, 6x300m with short recovery. It was like, three minutes in between and we had to do a series of jumps and go right into the 300m. It wasn't on track, it was on an open field. They were at 47 seconds. I've never done six 300s in a workout, it was about 2 weeks ago.

Do you notice a difference in your physique or overall strength since doing more lifting?

I feel like I have gotten stronger. Before, I was a little bit imbalanced and I feel like I'm stronger in parts of my body than I was in ninth and 10th grade. I'm improving in my speed.

What do you do on a Friday when you don't have practice?

I usually go to a basketball game or hang out with my friends and go to the movies. For my school, I just want to do something, so I'll just go, but I'm not really like, 'go Bulldogs!' but I'll go out there to support.

What is something about you that most people don't realize?

I see myself graduating from high school and applying to colleges and hopefully getting in but I'm definitely going to go.

How do you react when you see people writing things like that about you on the internet that aren't true?

How much school do you have left before winter break?

I'm actually done with school, today was my last day. I ended the semester with all As. My hardest class was AP Calculus. [I'm also taking] U.S. History, AP Bio, AP Language Arts (analyze poems), Weight Training and Research (magnet required class) -- we research a topic for the whole year, my topic is wound healing and different types of skin treatments on skin cells and report the results.

AP Seminar - it's a new AP class they introduced this year... you talk about issues and topics and you write a paper about it... my first topic was Social Media and how it is a necessity in life. My second topic was, 'should the United States be involved in foreign affairs?'

Are you a big social media user?

Sometimes. I go on social media just to see the news. I go on MileSplit and [other running sites] to see what's going on. I don't really tweet a lot, I tweet pictures now and then and check out pictures.

Do you think your social media usage will change now that you're representing a brand?

Yes, I do, because social media helps promote certain products and it gets your attention and even though TV and newspapers advertise, social media gets it out [better]. 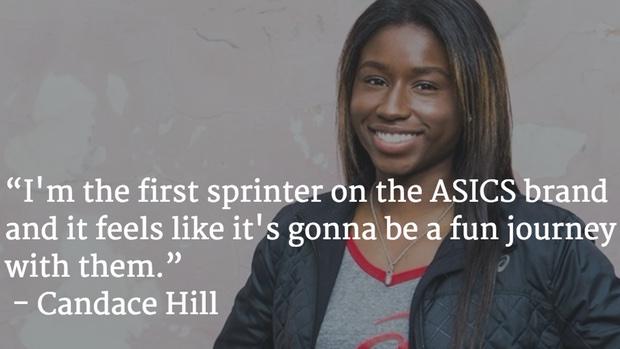 What do you think of ASICS and what is your favorite gear?

I'm the first sprinter on their brand and it feels like it's gonna be a fun journey with them. I love their jackets. [The Thermo Windblocker], I fell in love with it. It's one of my favorite jackets and their shoes are so comfortable.

They told me the color scheme and to pick something out that's purple and I'd go in and pick something out. [The shoot] was in Conyers, downtown Conyers, about two weeks ago. It was fun filming because I was sitting in school all day like, 'I can't wait to do this!' It was a great time with the team.

When we filmed at the track at school, a lot of kids saw the ASICS gear and were like, 'oh, maybe she signed with ASICS'... it was kind of secret, but not. People already started to know and would ask me and I just said, 'uhh... maybe, maybe not!' I'm glad it's out now.

Was it hard to keep it a secret?

No, not really. It was really fun releasing it and having everyone say their thoughts about it.

Who are your idols? (on the track and off the track)

On the track would have to be Allyson Felix and Jackie Joyner Kersee because they're the idols of track and they're really good runners and heptathlete. They raised the bar and it's my turn to go out and try to reach it. Off the track, I would say Malala.. she's just made a very huge impact, especially on the girls' side of things and has gone through a lot of difficulties and boundaries but she reached out and changed things. 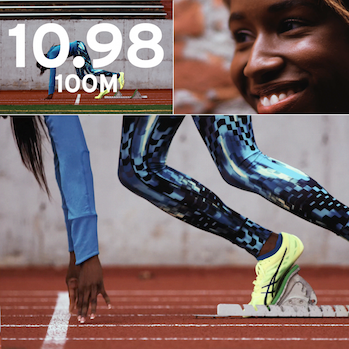 Now I do because everyone says, 'Candace, I look up to you, you inspire me,' and it makes me happy, lets me work hard because it motivates me.

What are your long term goals?

I'm thinking about just getting faster and staying injury-free and having fun with it. I don't want to look at this as work. I want to look at it was something I love. One day, make it on an Olympic team and make it on a world team, win medals, live a happy life and go to college.

You are the latest in a recent line of teenage athletes to turn pro in track (Kaylin Whitney, Alexa Efraimson, Mary Cain). How did they open the door to that world for you and do you ever think about that?

Sometimes I think about it... if they did it, why can't I do it? I just wish them the best of luck and you know, maybe people won't look at turning pro as a bad thing and start to see it as a positive thing.

How did competing at the IAAF World Youth Championships change your perspective?

It made me open up my eyes and see the world. You think everyone's looking at you like an American. It makes you aware of your surroundings, like, 'wow, this is different than the United States,' and makes you respect that. I was warming up on the track and you see the United States has the gear and massage tables and you see the other countries and they don't have the warmups we have and its like, 'wow, I'm really blessed to have this in America and they don't have this but they're doing great.'