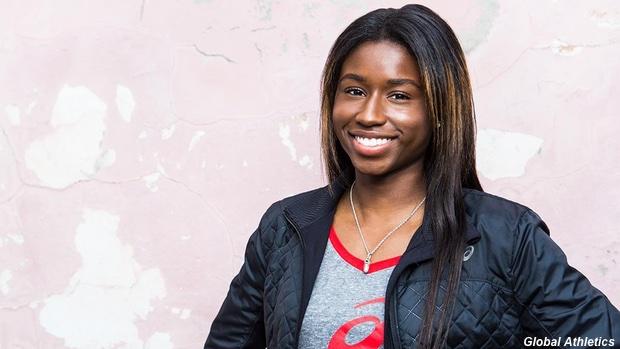 ASICS declined to discuss the financial terms of the deal, but it will cover full tuition for the junior who attends the magnet program at Rockdale County High School in Conyers, Ga. Hill has a 4.6 grade-point average.

"Candace is as good a student as she is an athlete, and we found that intriguing," Gene McCarthy, the chief executive of Asics America Group, told The New York Times. "For us, she's a Halley's comet of sport, a teenager who's tremendously gifted in both mind and body. With that talent and drive, we're betting that she can be the fastest woman in the world someday."
Hill switched coaches 10 weeks ago and now works with Tony Carpenter, founder and head coach of Titans Elite Track Club. The training group is based in Atlanta.
She is represented by sports agent Mark Wetmore, President of Global Athletics & Marketing (GA&M). GA&M also represents sprinters Nickel Ashmeade, Ryan Bailey, Jessica Beard, Kamaria Brown, Shana Cox, Tyson Gay, Natasha Hastings, Marshevet Hooker, Trell Kimmons, Bianca Knight, Tony McQuay, Gil Roberts, Aurieyall Scott and Shalonda Solomon.
Hill was a two-time national champion as a freshman in the 100m and 200m, but rose to international renown this summer. As a sophomore, she broke the national high school record and World Youth Record in the 100m by clocking 10.98 at the Brooks PR Invitational. She is the only American prep athlete in history to break 11 seconds in the event.
She ran 22.43 for 200m to win the IAAF World Youth Championships in August; the time stands as a World Youth Best and is No. 2 All-Time in the national high school standings.
Hill was just the second female athlete in history to sweep both sprint events (100m, 200m) at the IAAF World Youth Championships.
Tweets by milesplit