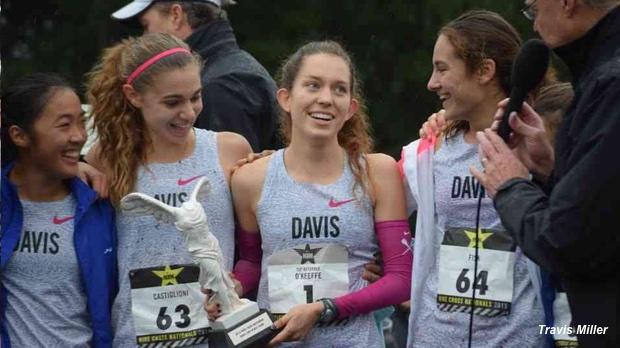 At the beginning of the season, Davis High School did not quite register on the national scale beyond the obvious inclusion of two-time defending California state cross country champion/10:00 3200m runner Fiona O'Keeffe (pictured holding trophy, bib No. 1) as the pre-season No. 1. As O'Keeffe matured through a tough season that started in breaking course records and ended in injury, it became obvious that her team was much, much better than anticipated. An injured O'Keeffe limped through the California state meet and finished a valiant eighth overall; the senior was the top finisher for Davis as the the Blue Devils finished just two points behind Great Oak and snagged a return trip to NXN. They competed in Portland in 2013, but did not advance last fall.

The state meet took its toll and O'Keeffe was not even a definite starter until race day. The Stanford recruit committed for her team and ran No. 4 that day, finishing in 85th (18:35); a healthy O'Keeffe placed fourth last year in 17:31. That must have hurt. But, if O'Keeffe did not run, their fifth runner would have scored 136 points instead of 46 points... putting the Blue Devils roughly in fifth place with 234 points, instead of standing on the podium for runner-up honors. Great Oak (third), long considered the best team in the state of California and, at various points this season, the best team in the nation.