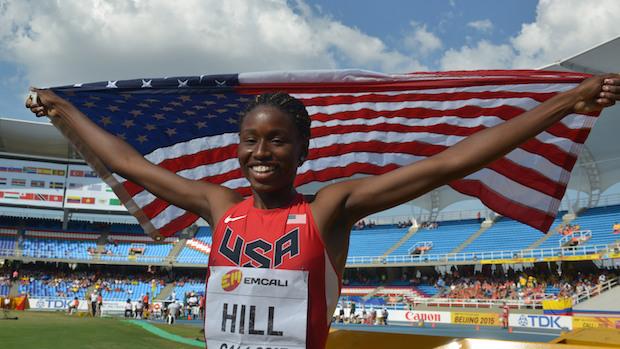 UPDATE: Candace Hill signed with ASICS on Thursday, Dec. 17. Read more details here. Below is a story written on Oct. 27:

The world's fastest teenager in Candace Hill is turning professional at 16 years old.

Several sources have confirmed that the Rockdale County High School junior is represented by professional agency Global Athletics & Marketing (GA&M) on Tuesday. Agents contacted for this story deferred to GA&M President Mark Wetmore, who did not respond for comment. At least three shoe companies are rumored to be in negotiations with GA&M and Hill, though a source says that ASICS is a front runner. The same source says the contract with ASICS is a six-figure per year deal for 10 years with no deductions, though this figure has not been confirmed by GA&M.

Hill's move comes only a few weeks after IAAF World Championships 100 meter bronze medallist Trayvon Bromell announced his decision to leave Baylor and the NCAA at 19 years old and sign with New Balance, a shoe brand traditionally associated with distance athletes. Bromell is the first sprinter under contract with New Balance.

ASICS has two elite hurdlers in their cadre in Lolo Jones and Queen Harrison, but Hill would be the only flat sprint specialist in the group.

The junior at Rockdale County High School in Conyers, Ga. set World Youth records this summer in both the 100 meters and 200 meters. She ran 10.98 at the Brooks PR Invitational in June to set the National High School record and is the only American athlete in history to break 11 seconds as a prep.

She ran 22.43 for 200m to win the IAAF World Youth Championships in August; the time stands as a World Youth Best and is No. 2 All-Time in the national high school standings.

Hill was just the second female athlete in history to sweep both sprint events (100m, 200m) at the IAAF World Youth Championships. She swept New Balance Nationals Outdoor in the 100m and 200m as a freshman in 2014.