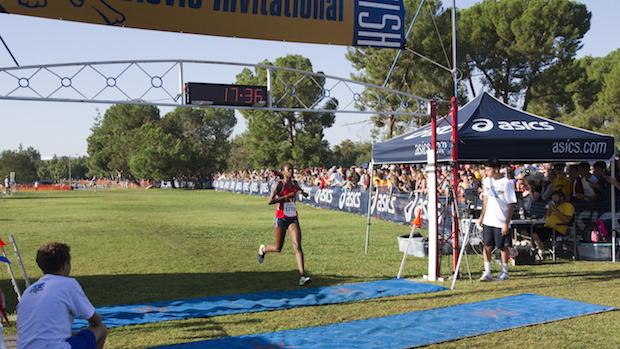 Destiny Collins is back in business. After a long track season that extended into the summer, the senior finished 10th at the Bob Firman Invitational in her debut but looked more like herself on Saturday in winning the ASICS Clovis Invitational in 17:36.7.

"It felt good to be racing on this course," she said. "I love Woodward Park and I thought this was a good race for my second race back!"

Great Oak packed their top five scorers into the top eighteen overall finishers and their top seven in the overall top 21. Their pack split 43 seconds with an 18:02 5k average. 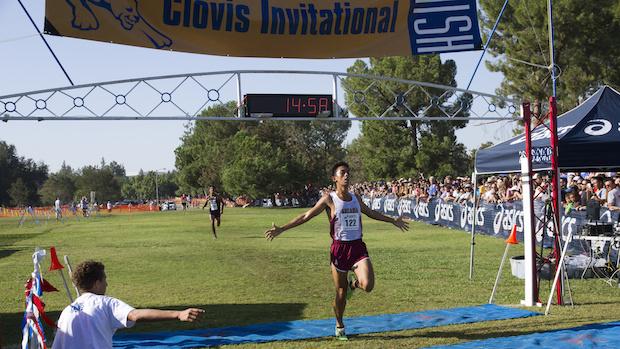 Phillip Rocha remained undefeated this year with a 14:58 performance. (Photo by Stephen Grisez)

What may have been even more impressive, however, was the performance from the No. 3 ranked Great Oak boys. They not only won the Championship with 81 points over four other nationally ranked teams, but recorded the second-fastest team time in meet history (77:58.1). That time came without the aid of No. 2-3 runner Isaac Cortes, which make GO's prospects even higher.

Senior Spencer Dodds' third-place, 15:08.6 performance led the way to a 50-second spread and 15:35 5k average. The No. 22 ranked Dodds battled gamely with pre-race favorite and No. 6 ranked Phillip Rocha of Arcadia as well as No. 24 ranked Eduardo Herrera of Madera South in the early stages of the race.

Rocha pulled away to his third sub-15 minute 5k performance this year with a 14:58 victory over Herrera (2nd, 15:01), as he makes a case for status as the nation's best distance runner so far this fall. California and national pundits will look forward to Mt. SAC in two weeks, where he will likely face defending champion and course record holder, No. 2 ranked Austin Tamagno of Brea Olinda.

The national team rankings look to shake up a bit, as No. 12 Dana Hills (CA) took second over No. 10 Jesuit and No. 13 King. The No. 17 ranked Southlake Carroll boys from Texas traveled an incomplete squad and placed 11th.