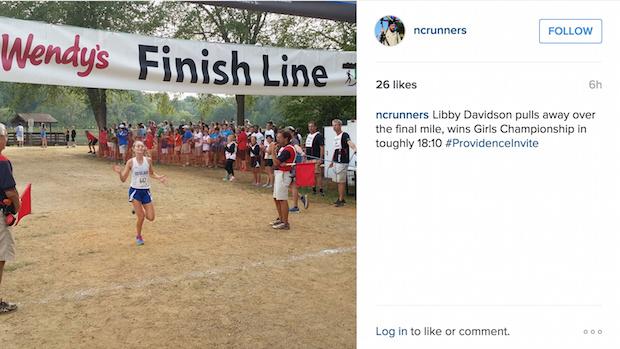 US #7 Libby Davidson of E.C. Glass, Va. made her season debut in high style, winning the competitive Championship Section of the Providence Invitational in 18:09.

The junior kept things comfortable with the lead pack until the two mile mark.

"[Once I] saw the soccer field, started almost sprinting," Davidson said, "saw the people, then full out sprint!"

A hamstring issue slightly hampered her pre-season preparations but she said she has made a full recovery.

"It was never an injury, it was just 'it's there and not going away' for a long time," she said. "I'm just keeping doing physical therapy so the injury doesn't comeback. I've been Ellitigo-ing every day so two-a-day training. So I Elliptigo before school and practice with the team after school. Started some strength training."

However, the six-time state champions in Green Hope did not seem to be pushing an all-out effort, as noted by @NCRunners.

After pacing teammates for 2 miles, Elly Henes comes all the way back up to 3rd at the finish #ProvidenceInvite Girls Championship
-- NCRunners (@NCRunners) August 29, 2015

"Usually for Providence and early races we try and focus on pack running and running as a team," senior Henes said. "We try and take it out controlled and progress throughout the race."

Even given Henes' controlled race, the 18:16 runner-up finish from eighth-grader Jessie Crowley is noteworthy. The breakout star crushed her personal record of 18:54 from 2014 and led a Riverside team that had all five scorers run 19:01 or faster.

"I did not expect to get second in this race," Crowley said. "I was surprised... I thought everybody was gonna start out really fast but I was able to keep up. This is kind of a surprise to myself because last year in cross country it was hard to finish strong. I think I am ahead of schedule."

The young runner revealed that not only is Riverside gunning to defend their South Carolina state title but are making NXN a priority this year. The Warriors compete in the same region as Green Hope, NXR Southeast. They finished just 11th last year to Green Hope's second, but the Providence Invitational signals that 2015 may mark a rivalry year between the two Carolina powers.

Mitchell Resor of Waddington won the boys Championship Section in 15:21, a new personal best by 16 seconds. The senior was surprised to find himself at the front of the pack after runners he expected to race were no-shows. 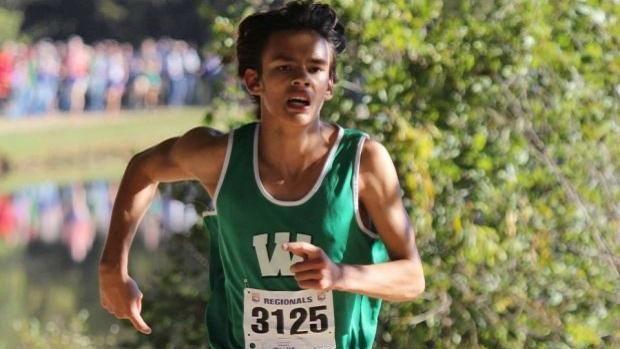