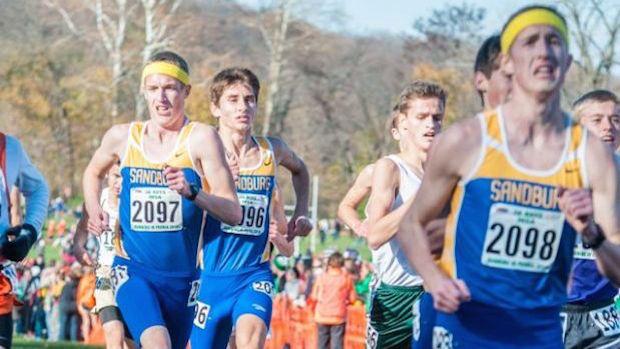 Sandburg boys at the 2014 Illinois Class 3A State Championships. (Photo by Colin Boyle.)

The U.S. No. 2 ranked Sandburg (IL) boys look strong after sweeping the top eight spots at the SWSC Pre-Season Meet on Tuesday afternoon in Channahon Park in Channahon, Ill. Senior Sean Torpy won the race in 15:09.00, as the top five scorers averaged 15:20 and finished within a 21-second spread.

After the race, the team did a brief jog and workout.

"The focus right now is really just getting fit and ready for the first week of November (Illinois state meet)," Sean said. "We were working pretty hard leading up to the meet so we certainly weren't at our best but there is more to come. Approaching the race we were really focused on working together and being aggressive. There was definitely a good balance between working together and also competing against each other. We really just set out to set the tone for the 2015 season and I think we did a good job with that.

"The focus was definitely there and that's exactly what we needed."

Check out the top ten results below and see full results here.